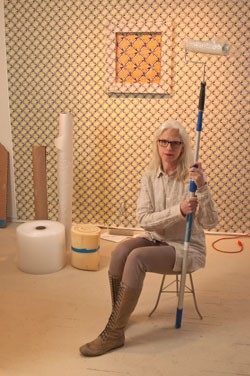 As a child in Schenectady, N.Y., Nancy Dwyer elicited oohs and aahs for her artwork, which she recalls as being “effortless” for her to create. That talent eventually took her to the State University of New York at Buffalo, where she studied studio art and joined a co-op gallery along with Cindy Sherman and Robert Longo. Those two went on to become global art stars, but, back in the 1970s, “we were all just a bunch of grubs,” Dwyer recalls.

Now a sculpture professor at the University of Vermont, the 58-year-old Dwyer has achieved her own measure of success as an artist. Her work is the subject of a current retrospective that fills the spacious display area of the Fisher Landau Center for Art. This former parachute-harness factory in the New York borough of Queens has assembled 25 of her pieces, some of them quite large, under the heading “Nancy Dwyer: Painting and Sculpture, 1982-2012.” About a third of the works are part of the permanent collection of Fisher Landau, which serves as both a repository and a showcase of contemporary art.

The word-based works that have made Dwyer almost famous make up most of the show. Verbal/visual punning also inspired a Dwyer piece that’s included in the Fleming Museum of Art’s current “High Trash” show. It consists of four galvanized-steel garbage cans reconfigured to spell out “FOOD.”

Interviewed in her semi-orderly Pine Street studio, the tall, slender and platinum-haired artist cites many influences that inspired her to make word art her métier. Surprisingly, perhaps, it was a clerking job at Barnes & Noble in the early ’80s that turned out to be the most powerful catalyst.

Managers of the original B&N on lower Fifth Avenue in Manhattan had asked whether any employees could draw signs for displays. Dwyer could. And she proved so adept that it became her regular gig. More significantly, sign making had a transformative effect on her art. “It morphed into words as the most important element,” Dwyer recounts. “I had a revelation that I could just use words by themselves. It occurred to me: ‘Why not just make signs?’”

Signs with jokey or disturbing meanings, or both, have become Dwyer’s specialty. At Fisher Landau, an aluminum surface is sliced up to spell out “KILLER,” with knife-like blades jutting down from each of the letters to act as table legs. In another piece, Dwyer uses mahogany, leather, glass and brass to produce what she calls “The Desk of ENVY.” Its shape does resemble a desk, and the capitalized letters are colored green, of course.

In a side room that offers a view of this postindustrial corner of Queens, upholstered cushions attached to steel frames have been arrayed as a seating platform that spells out the word “window.” Can you guess the title of this work? Yep, it’s “Window Seat.”

Dwyer’s art wasn’t always about words, however. As her admirers attested during her childhood, she’s good at drawing. In the early ’80s, Dwyer was painting figures in outline form on canvas, and samples of that work are some of the strongest pieces in the Fisher Landau show. In “Cholesterol,” a man with a stunned expression lies propped on one forearm while his other hand clutches his heart. “Lady Cop” consists of a woman in uniform pointing a revolver directly at the viewer.

These pieces from 30 years ago testify to Dwyer’s membership in what New York’s Metropolitan Museum of Art dubbed “The Pictures Generation.” That was the title of a 2009 show at the Met that included two pieces by Dwyer as well as works by her friends from Buffalo, Longo and Sherman. Other pieces on display were made by equally well-known artists with whom Dwyer associated in Manhattan’s SoHo district in the years when its residents were young and hungry.

In its commentary on the “Pictures” show, the Met suggested that this group of artists, most of them born in the ’50s, had been shaped by their unrelenting exposure to media images. “Their relationship to such material was productively schizophrenic,” the show’s curators wrote. “While they were first and foremost consumers, they also learned to adopt a cool, critical attitude toward the very same mechanisms of seduction and desire that played upon them.”

The Pictures Generation was, in other words, consciously political, but not given to overt expressions of political beliefs. These artists also had a mighty impact on the art world.

Reflecting on the scene of which she was a part, Dwyer remembers being “on fire for making art.” When she moved to SoHo from Buffalo in the mid-’70s, she saw that “everybody was serious about what they were doing. They were dedicated to it even though there was no money in contemporary art at that time.”

Now as then, Dwyer says, she views herself as “a committed artist.” Committed to what? “I’m committed to my main responsibility of documenting and expressing as best I can my position as a person in today’s world,” she replies.

Dwyer has also come to see herself as a mentor. She began teaching as a visiting lecturer at the California Institute of the Arts in the 1980s and later taught at the School of Visual Arts in Manhattan, which Dwyer describes as “my health-insurance job.” It proved much more than that, though, as she came to realize how much she enjoyed being “the students’ art shrink.” Of her arrival at UVM in 2004, Dwyer says, “I’m really grateful they hired someone in mid-career.” She notes it’s often younger artists who get tenure-track positions.

Burlington has proved a salubrious setting for her, Dwyer adds. She says she enjoys living downtown in the Vermont House and strives to be an active member of the arts community, working with organizations such as the BCA Center, which staged a Dwyer solo show in 2006. UVM, she notes, offers “a positive and supportive environment — it’s very unlike New York in that way.”

Dwyer was a child of the city, however, and still exhibits symptoms of New Yorkphilia. She was born in Manhattan but moved upstate with her mother and two older sisters following the sudden death of her father, an Irish American beat cop in Harlem, at age 46. Life in Schenectady proved disorienting for her. “It felt like some sort of cosmic mistake for me to be living there,” she relates.

Dwyer fled to Greenwich Village at age 19 and moved into an artists’ housing development. She was married from 1993 to 2001 to photographer Oliver Wasow, and lived for some of those years in Warwick, N.Y., a Catskills town that “I really liked,” Dwyer says. She has no children.

Asked which artists she admires now, Dwyer offers the names of a few of her contemporaries. No one from an earlier time? No appreciation for the impressionists, for example?

“I’m much more interested in what’s new than what’s old,” Dwyer responds. “I’ve never been much into narrative in art. If I looked at an impressionist painting, it would be to study the way the paint was applied, not to take in the subject.”

The print version of this article was headlined "Medium as Message".