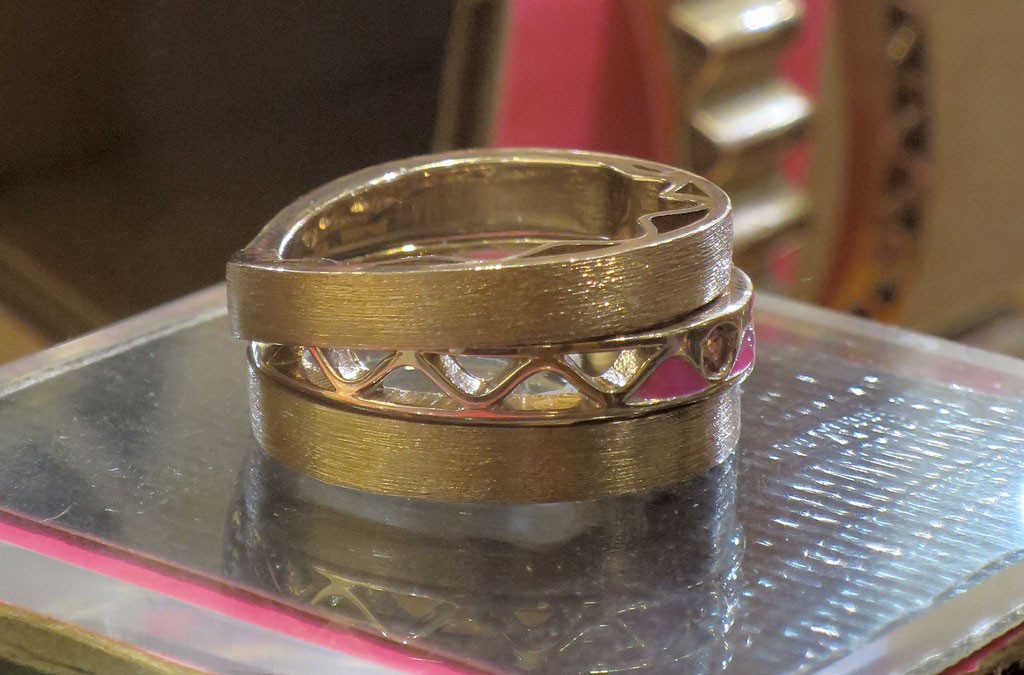 Pink is in — at least it is at Perrywinkle's Fine Jewelry in Burlington. Last Thursday evening, employees at the flagship on Burlington's Main Street donned magenta accents, and the store buzzed with guests, some with rosy Solo cups in hand. The space was awash in the hue, fine metals and sparkly gems, and it was certainly very pretty. The star of the evening, though, was not the décor or even Perry Sporn, owner of the northeastern jewelry chain, but Kat Clear.

The Burlington artist is known primarily for her large-scale sculptures made from steel and found metals — not usually the stuff of luxury jewelry. Yet Clear is the pioneering artist in Perrywinkle's Daydream Series, a collaboration that has been years in the making. The Kat Clear Collection features a total of nine new pieces — bracelets, rings, earrings and necklaces — rendered in rhodium-plated silver, with accents of gold, pink tourmaline, and pink or black enamel.

The designs are edgier than what you'd normally find at Perrywinkle's, more like sassy abstract sculptures in miniature than traditional jewelry. Priced between $200 and $1,200, Clear's pieces are also relatively affordable. The collection is boldly geometric, and each piece makes some use of wavy lines — think seismograph, or maybe calculus.

Actually, said Clear, those squiggles represent corrugation. The pieces' shapes and colors were inspired by humble materials from her MFA days — corrugated cardboard and duct tape.

In 2013, as a new graduate student at Michigan's Cranbrook Academy of Art, Clear sought to connect with fellow artists in an environment she found intense and sometimes isolating, she recalled. Her method of choice was to craft a note for each classmate over the course of the two-year program. She wrote personal messages on pages from Scott Lenhardt's Twenty Four Hour Woman calendar, wrapped them in cardboard and sealed them with pink duct tape. "It all sort of links back to found, reused and recycled material," said Clear.

That project, it seems, has kept on giving. Besides helping Clear make grad school friends and sowing the seeds of her jewelry line, her handcrafted notes inspired a third project: a series of road signs that currently flank Perrywinkle's entrance. Lines from the notes — "It's not that messy, I promise"; "I forgot the code, but I swear I'm allowed in" — appear in black print on life-size pink road signs. The idea came from the contrast between Cranbrook's "pristine and manicured" setting and nearby Detroit, Clear said. While at school, "I was inundated with industrial, abandoned landscapes, [including] road signs in storage."

Sporn, whom Perrywinkle's VP Jevan Fox describes as "a Wes Anderson type," officially approached Clear about the Daydream Series in October 2014, though the two had met some years earlier when Clear designed a large-scale installation for Sporn's store in Long Island, N.Y., Devotion. Once on board, Clear worked with the Perrywinkle's team of CAD designers to develop the line from cardboard mock-ups to the final product, which was created in Perrywinkle's own manufacturing facility.

Sporn sees such collaborations with artists as bringing Perrywinkle's closer to the world of high fashion: "It takes us in a new direction." He takes pride in his company's capacity for artistic development and fabrication, likening it to an iconic music label: "I love what Berry Gordy does ... [We're] doing Motown, but Motown for jewelry," he said. Upcoming artists in the series include Burlington-based singer-songwriter Caroline Rose and a winner of "the Canadian 'Project Runway.'"

Sporn's blurring of art and retail is familiar in the worlds of high fashion and luxury commodities, a trend that has trickled into the mainstream with the proliferation of Etsy and design-minded makers' markets. Yet the intimate scale of Burlington lends a particular excitement to this partnership. Clear graduated from the University of Vermont, and her art (including sculptural bike racks) appears in several well-trafficked downtown locations. Sporn moved his company headquarters to the Queen City in 1983.

The collection will, of course, also bring Clear's work and vision to customers at the other four Perrywinkle's locations — three in New York, one in Montréal.

To bring the project full circle, Clear evoked her earlier work in a sculpture for Perrywinkle's façade — a version of one of the collection's rings made from an eight-foot loop of steel built around two locally salvaged wheels. Assisted by two friends, both Burlington artists, she installed that finishing touch in the early morning of the day before the launch, laughing and friendly in work boots and jeans. One thing was, ahem, clear — this is an artist of great range.