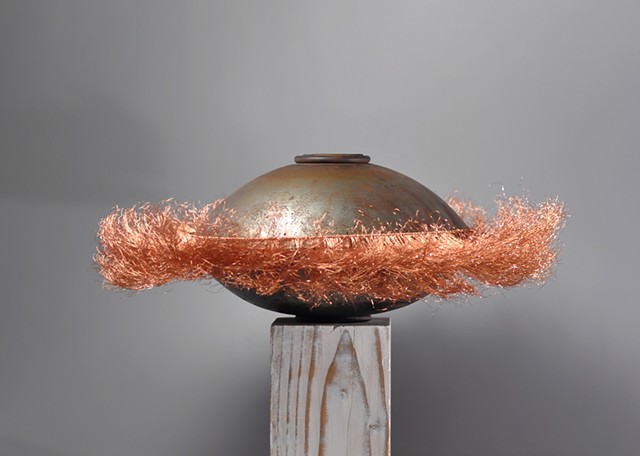 Motorists minding the broad, curvy road through Lyndonville might overlook the Satellite Gallery & Community Space, tucked into a row of bricky storefronts. But the one-room venue is a worthwhile destination.

Since August 2019, Satellite has hosted musical events, classes and art exhibitions — with pandemic-era adaptations. Founded by artist and teacher Martha Elmes, backed by a consortium of community partners and staffed by volunteers, the gallery is a bright spot of downtown revitalization. Passersby on foot can see why: The artwork visible through Satellite's tall windows is beckoning.

Currently that art belongs to Bradford artist Cindy Blakeslee; her exhibition of inventive found-object sculptures is called "Circular Logic." That is the only title Blakeslee allows; her individual works are given meaning-free numbers. She wants viewers not to be influenced by words, she explained, and she seems to have no use for arbitrary concepts.

Blakeslee comes to the art of assemblage from years of experience in junk reuse and environmental dedication. tweet this

What Blakeslee does have use for — oh, so many uses — is what the rest of us throw away. She is not the only person to make artwork from detritus, but Blakeslee has an unerring eye for how thing A might be combined with thing B to create a completely new and artful thing C. If she hasn't tattooed the "reduce reuse recycle" symbol on her person (as far as we know), Blakeslee comes to the art of assemblage from years of experience in junk reuse and environmental dedication.

In the mid-1990s, she worked for the original ReStore in Montpelier. "It was designed to take scrap from Vermont manufacturers and resell it to the public," Blakeslee said. "I went to many manufacturers across the state and explored their trash cans to see what was still usable."

A couple of years later, she started a nonprofit called the Center for Sustainable Building, which in turn launched Residuum in Barre. That store, too, collected reusable building materials from construction sites and offered them for resale. Blakeslee said she has reinvented herself several times — she's also been the executive director of the Vermont Trial Lawyers Association, a technical writer and a "wannabe food writer." Through all these chapters, art-making has been something she could return to. "It also permits me to fulfill my strongest urge, which is that of environmentalism," she said.

An unabashed dumpster diver, Blakeslee said she doesn't throw anything away. She aims to elevate the stuff that others discard "into something interesting, humorous and/or provocative."

She achieves all of those objectives in her current exhibition. Some assemblages do fit the circular theme: long chains of round or oval shapes that Blakeslee cut from scraps of plywood subflooring. "Installers throw out what they don't use," she noted. The largest one ("#203"), eight feet long and painted an audacious red, dangles from the ceiling in the front window. A triplet of shorter, pale-colored chains ("#185") hangs against the gallery's brick wall. A pair of black chains ("#186") is suspended, chandelier-like, over a table.

A few smaller, wall-hung works incorporate cut and painted circles of thin wood affixed to leftovers from wood-turning projects. Their geometric abstraction has decorative appeal, but another wall piece, "#196," is more intriguing. Blakeslee cut a slab of plywood into a long oval, then cut a parallel oval ring within it, creating an oval "island" in the middle. She secured these pieces together, each painted in contrasting black and olive green stripes. The resulting work is a cohesive reimagining of discarded plywood. 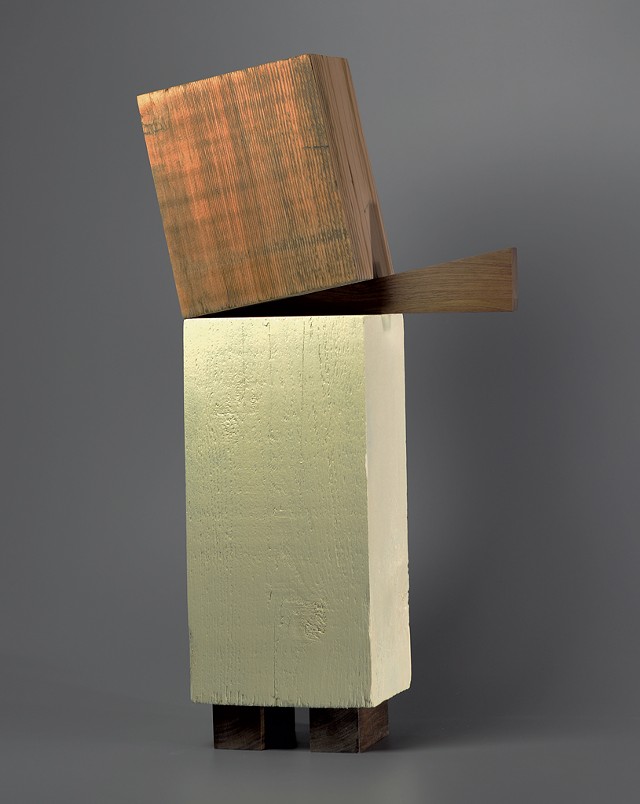 "Once I got into cutting circles, I started cutting ovals," Blakeslee said. "I don't know where my ideas come from."

Except for an early anthropomorphic piece in this "something of a retrospective," as she put it, "Circular Logic" mainly presents assemblages that don't try to emulate something else. But it's hard not to indulge in interpretation for the piece that Blakeslee refers to informally as "two woks." 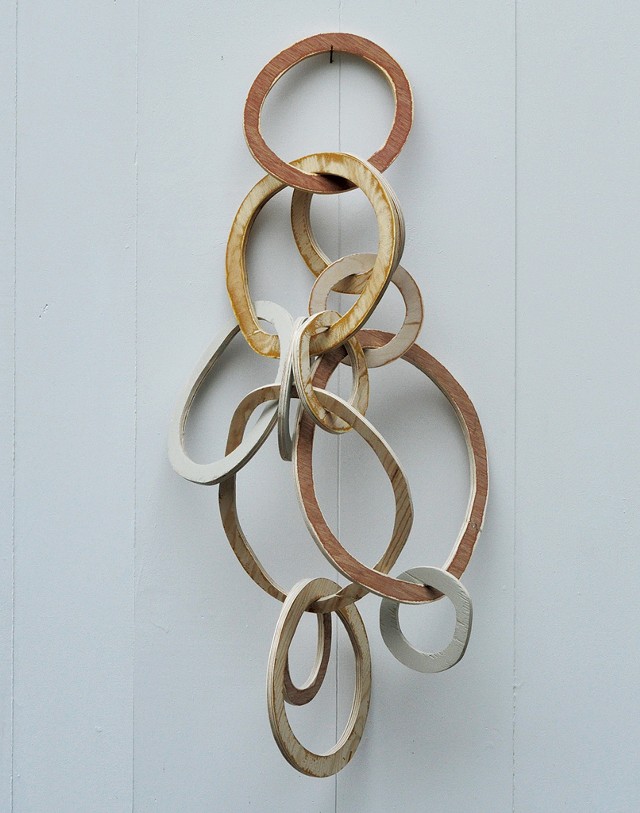 Officially "#133," it is indeed two woks stacked and welded into a UFO shape and adorned with a ruffle of copper wire — hundreds of pieces of copper wire, laboriously cut and tied into tiny holes that Blakeslee drilled in the woks' edges. Set on a thick wood pedestal, this post-culinary creation manages to be both silly and sophisticated at once. Its ruffle sparkles prettily in a sunny window.

Space does not allow description of the many and diverse artworks in this exhibition. Suffice it to say that "Circular Logic" gives testimony to Blakeslee's fecund imagination, productivity and evolving skills. "I'm limited by what comes to me," she said modestly. "For me, it's all about form and texture and if it's an idea I'm amazed I came up with."