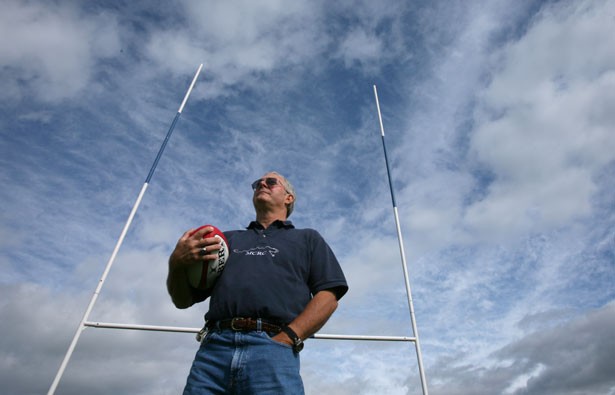 On a recent Saturday afternoon, Burberry-clad parents have descended on the Middlebury College campus, where the football team is spiraling toward a 22-30 loss to Williams. But just down the hill from Youngman Field, another set of Panthers is busy clobbering its opponents, on its way to a 58-3 victory.

"Touch, touch and pause, and . . . game!" yells the referee as he scrambles away from the rugby players representing Middlebury and St. Michael's.

"C'mon, men!" shouts Coach Ward Patterson, stalking the sidelines. A sizeable crowd of spectators has gathered, and many of them have their eyes trained on Patterson instead of the players.

"Have you heard his halftime talk?" says one student. "It's so funny."

"Have they lost yet?" asks another.

The answer is nope - not this season. The Middlebury College men's rugby club is 6 and 0 and aiming to repeat the near-perfect year of 2006-2007. Last May, the team won its first national championship, taking the Division II title in a 38-22 game at Stanford University against Arkansas State.

Wait . . . the rugby club? The one known for its beer-soaked banquets and bawdy ballads when I attended Middlebury in the early 1990s? The team that, according to former social chair Johannes Ernharth, used to partake in "keg practice," during which guys would run toward a quarter-barrel of brew?

In the past 10 years, the Middlebury College rugby club has grown up, jettisoned its raunchy reputation, and become a major force on the field. While the game itself is still dirty - muddy hands, grassy knees - the club is a clean and graceful machine.

Behind, or rather at the side, of it all is Patterson, a South African expatriate who has both rejuvenated and refined the game at Middlebury. Silver-haired and silver-tongued, the coach peppers his speech with funny words such as "goolies" and "tochas," but he pushes his players to take their sport seriously. His leadership has led to not just the national title but a full-time, paid coaching position for himself, a rarity in club sports.

"This is my life's dream, darling," says Patterson. "This is what I do. I eat, sleep, breathe this stuff."

Ward Patterson was born and raised in Cape Town and Victoria, South Africa, where, he says, playing rugby was as common as breathing. "If you had a pulse, you went to practice four days a week," he declares.

While studying at Principia College in Illinois in the late 1970s, Patterson helped create and coach that school's rugby club, which by its second year was winning most of its games and attracting scores of students. "My passion for coaching was birthed, and I never looked back," says Patterson, who went on to receive his Master's in sports management from Ohio State University and coach the Missouri Collegiate All Stars.

In spring 1997, he began to poke around for regular coaching gigs and heard that Middlebury was looking for a new leader. The club was coming off a suspension year after the "Williams flower-bed story," explains Patterson. "The team went down there, tore up the flower beds, were sent back to repair them - and, in April, the tulips came up right outside the president's window, and in good Williams colors it spelled, 'Williams sucks,'" says the coach, stifling a laugh. "Creative behavior, nonetheless still not appropriate."

Patterson promised Middlebury officials he'd toe the line, and asked to head up the rugby club - which comprises men's and women's teams - starting in the fall of 1997. Unsalaried as a coach, he worked as a "grunt laborer," he says, and at the bookstore when he wasn't coaching.

It was at the bookstore, says current club match secretary and student Pat Ford, that Patterson did some of his best recruiting for the men's team. "When the freshmen were walking through, he'd size them up and ask them to come out for rugby," says Ford. "I've never met someone more dedicated to rugby - he's comical, but he has an undying sense of commitment to his team and his players."

Bibliophiles now have to hit the rugby pitch field, known as the "pitch," for their Patterson fix. Last spring, after players, parents and alumni lobbied the administration, Middlebury hired him as a full-time rugby director to coach the men's team, oversee the women's program, and handle the logistics of everything from uniforms to medical forms.

"To have a paid director of a rugby club is very rare and big news," says Alex Goff, the editor-in-chief of eRugbyNews.com. "But, more and more, college rugby clubs have embraced the idea that they are playing a serious sport, and, as a result, more and more administrations realize that these clubs, for better or for worse, are representing their school."

Patterson says attitudes toward the rugby club have changed astronomically between last spring and this fall. "There's the realization that this isn't just a bunch of Midd kiddies farting in a thunderstorm," says Patterson. During the match against St. Michael's College, he holds court with newfound fans by showing off his championship ring and chatting up parents.

"This is amazing," one visiting mother gushes to Patterson. "There's such an awareness of the game now."

Patterson calls himself a "character educator" and "dignified gentleman," and his players seem to agree. "Wardo is more focused on us being good men first," says Israel Carr, the club's treasurer. "He's always pushing us to play the cleanest rugby we can play."

It's not all squeaky clean, though. At the match with St. Mike's, the ref makes a call that obviously irks a Panther in blue and white. "I'm going to shit a brick," he grunts as he storms toward a time-out. And while the rugby team's singing and drinking have now taken a backseat to the actual game, there's only so much guidance Patterson can give. "The behavior in the club has changed dramatically from when I first arrived in 1997," he says. "But with the 21-year-old drinking age, I'm not in a position to be involved in responsibility drinking - I can say things on the field, but it's not the same as sitting down after a game and having a pint."

Still, players like Ford and Carr say it's not about the booze anymore. And as long as Patterson is stalking the sidelines, the Middlebury rugby club is learning far more than the rules of a sport that is now gaining serious ground in the United States. Rugby has had plenty of rough, dirty and vulgar teams, says Patterson. He'd like to help Middlebury students understand the meaning of dignity and grace.

"We don't put up with ragtag idiots, we don't put up with players who go around biting and kicking and putting an elbow in someone's teeth and things like that," he says. "If we can help young men learn that in this generation, where everything is glitz and bling, it's a critical life lesson."

And if another national title should come their way next spring? "Winning is really nice - trust me," says Patterson. "But what is in my heart and my soul is that coaching and the sport of rugby together give me the opportunity to take young males and females, [and] give them a chance to learn who they are. They get the chance to look inside themselves and see courage, fear, determination, sportsmanship and character."