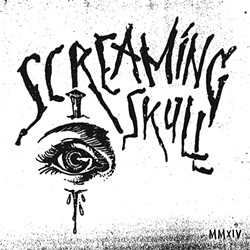 Screaming Skull, like so many bands in the hardcore and punk scenes, had a short, intense existence. One of their only two live shows took place at the Monkey House in Winooski in 2014 — MMXIV, to Roman and Latin nerds — at a Halloween benefit show for local musician Jeff Foran. Having since dispersed across the country, the band members left behind some destroyed equipment and a 10-track album, MMXIV, that's still generating listeners two years later.

For all the noise and fire, Screaming Skull were a high-precision operation. The rhythm section of Tom Fuller (Unrestrained) on drums and Matt Kimball (Sink or Swim) on bass do impeccable work here, delivering machine-perfect performances with a madcap human touch. Even on the most fleeting, frantic tracks, the guitar lines manage to be both clever and catchy. This is mostly thanks to the tireless Justin Gonyea, who has worked in the genre so long he can play with constraints to great effect. (Local hyper-prolific multi-instrumentalist Tyler Daniel Bean contributes additional guitar parts.)

There is pretty much only one setting on this machine, and it is Destroy. The material is fun, too — far from the earnest anger and political doom that preoccupies so much punk music. Everyone involved seems to be having a blast, and, despite their talent, they don't take themselves too seriously. It's good chemistry.

In a nod to early hardcore traditions, most of the songs on MMXIV clock in under one minute long. "The Bike Lane" is emblematic of this hit-and-run approach, sprinting directly into a high-speed verse — about bike lanes, presumably, but I can't be sure — then cranking everything up to 11 before skittering into a funky, palm-muted groove played exactly ... once. Drop the curtains, raise the lights, thank you very much.

This breezy approach doesn't always work in their favor. Several tracks, especially "This Is a Sandwich," would benefit from a longer treatment that allowed the drum grooves — and genuine hook for a chorus! — to breathe more. (Or at all, really.) The band's commitment to aesthetics makes MMXIV into a more compelling artifact, all angles and edges, but at the cost of a better album.

Of course, sheer logistics might have been a factor there, too. Screaming Skull, from their inception, fought to simply exist, separated by hundreds of miles and pulled apart by schedules. While this album was being made, lead singer Danielle Allen was living in Providence, R.I., and Gonyea was laying out the music in Burlington. The tracks were recorded at Amesbury, Mass., studio Format Audio and tastefully mastered by Dan Coutant.

With the singer and drummer both calling Portland, Ore., home this year, Screaming Skull are unlikely to reunite anytime soon. In a world that takes tech miracles for granted, though, it would be easy enough to resurrect a studio project for another album. Time will tell if the Skulls are satisfied with MMXIV as their sole legacy, but it's enough for them to make a name for themselves.

MMXIV by Screaming Skull is available at thescreamingskull.bandcamp.com.