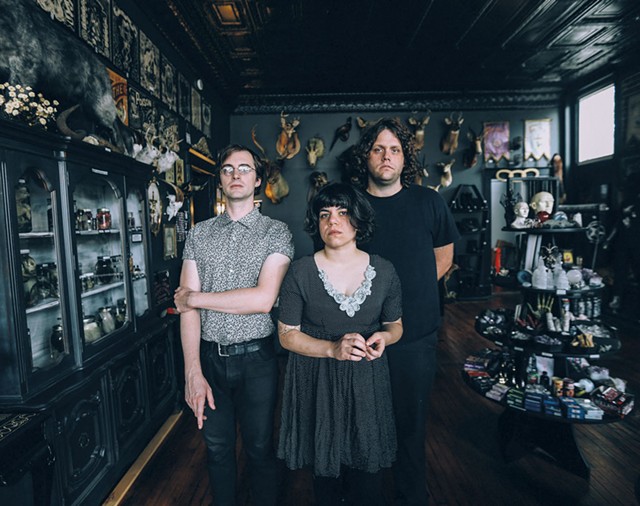 Power trio Screaming Females emerged in the early to mid-aughts from the DIY basement scene in New Brunswick, N.J. Since 2006, they've released seven albums, including 2018's All at Once — a fitting title for an era when endless knowledge and entertainment are just a few clicks away.

Front woman and guitarist Marissa Paternoster, 31, finds troublesome the never-ending stream of input made possible by smartphones. It distracts from the part of life that she feels is the most important: the middle place, the space between all of the highs and lows.

"That's kind of when some of the best stuff happens," she told Seven Days. "That in-between time is the time you use to create the highs. That's the only way the lows can exist."

Paternoster is known for her distinct, quivering vocals and formidable guitar skills. To wit: In 2012, Spin named her the 77th best guitarist of all time. Her group's recent efforts boast sharper production values and more adventurous compositions than its early work, but its bedrock of gritty punk remains intact.

Seven Days caught up with Paternoster by phone.

SEVEN DAYS: In a feature for Vinyl Me Please, the writer reckons that All at Once is about "the broad space between joy and sadness" — and you seem to concur.

SD: I feel like a lot of people ignore or even resent that part of life.

MP: I have more difficulty being quote-unquote bored or unoccupied as I get older. I think it was a lot easier to be unoccupied when I didn't have a window to the world in my pocket all the time.

The bulk of our lives is this in-between, and it's very nuanced and isn't without merit [or] worth — but it's never really acknowledged. I guess because I've been having increased difficulty focusing and being calm and relaxed when I am in that in-between world, I definitely think about it more.

SD: One line that really strikes me from your song "Soft Domination" is, "And I need you to know me / So that no one else owns me." I've read that you don't really like to talk about your lyrics, but is there any chance we can talk about what's going on there?

MP: I'll do it for you. That song's kind of like about the way capitalism can kind of seduce you as a young person, kind of the same way an abusive partner might — promising you a lot of wonderful things like unconditional love or gifts and a nice house and good job and stuff. And then you get super involved, and all of a sudden you're older, and you're like, "I don't want to be part of this at all, but I can't get out of it."

SD: That's much darker and scarier than I thought it would be.

MP: Yeah, it's not about romance. It could be if you want it to. I'm not in charge. I tell everybody [it's] listener's choice. However someone wants to interpret it is absolutely fine by me — as long as it brings them joy.

SD: Have you ever been truly wowed by an unexpected interpretation of one of your songs?

MP: I can't think of an instance in which that has happened, but I'd be pleased to hear it someday. Usually people are just like, "I love that song. I was having a hard time, and it made me feel better." And that's all I think someone could ever want if you love making music, is to make someone feel happy or comforted.

SD: After 12 years of putting out albums, how do you keep yourselves from feeling like you've plateaued?

MP: When we first started playing, our goal was never to reach some kind of weird, mythical pinnacle of success. Even though we were young when we started, I think we were all kind of smart enough to know that was not something that would make us happy.

We've always guided our band toward sustainability. I think that there's no real arc in sustainability. You try to maintain some semblance of homeostasis and make sure everyone's having a good time in their personal lives and that they're contributing creatively and are feeling satisfied with the work that we're doing.

SD: Contentment seems to be a running theme in your work. What's something that pushes you away from that feeling?

MP: From our little microcosm looking out on the world, it's a very scary place. That in and of itself is reason enough to feel anxious. But for the most part, I'm self-aware enough to know that I'm very lucky to get to do what I do.

I think everybody — no matter how much fun you're having or how much of the dream you're living — people are always looking for the perfect place where they feel safe and at home and happy. What does the bumper sticker say? "Happiness is a journey, not a destination." You can quote me on that.

SD: DIY and basement-type spaces foster a lot of creativity and community. How do you think journalists should best cover those spaces without blowing up their spot?

MP: Oh, jeez. I don't really know! I've never really thought about it before. I'm trying to think of times when I've read about DIY spaces, and it's always in zines. Whenever [media outlets] that might be unfamiliar with DIY or underground spaces write about them, it always [seems] silly. Maybe it's better [to be] hands-off.

Whenever bigger publications would write about New Brunswick basement shows, there [was] a feeling that the person writing about it had no idea what the hell they're talking about. But that's just me being really presumptuous.

SD: You have a number of tattoos, correct?

SD: Did you design any of them?

MP: A lot of the ones on my legs I did myself. They're stupid. One's, like, a whale with a hand coming out of its blowhole. I don't really know what the deal with that is. One's a weird lady. I don't have anything very complex. They're stick-and-pokes. I guess I did quote-unquote design them, but I don't know if I'd describe it that way. I drew some shit on my leg, and it won't come off.

SD: Who are all of the animals in your Instagram feed?

MP: Oh, well, I want to give a big shout-out to my man, Mister, the cat. [He] passed away a couple days ago.

MP: I'm gonna miss him. It was very peaceful. Twelve-year-old man. I love him. He's on the rainbow bridge. I also have a dog named Little. She's perfect. She has these cute little marble, dead-black eyes. And she has a haircut like [young] Devon Sawa.

Music Feature Screaming Females Marissa Paternoster All at Once Video