Scrag Mountain Music Premieres a Nature-Inspired Work Among the Trees 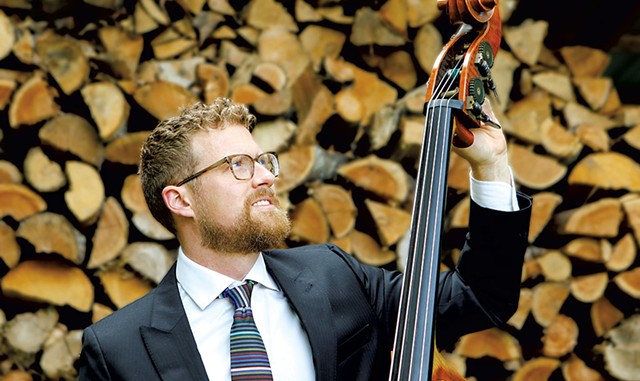 What is the sound of 24 double bassists playing among the trees? Given the limited repertoire for such an ensemble, an upcoming opportunity to experience one shouldn't be missed. This weekend, a series of concerts premieres composer Eve Beglarian's most recent work, "A Murmur in the Trees," for 24 bassists. The musicians will play arrayed along an allée of trees in Brandon on Saturday, September 11, and in Montpelier's Hubbard Park the next day.

A couple dozen double basses might seem to promise a sound much larger than the murmur of Beglarian's title. But, as the composer — who moved from New York City to Brandon at the start of the pandemic — noted during a phone call, "Double basses unamplified are surprisingly quiet instruments, given their size. In a concert, they resonate with the wooden floor of the concert hall. Outdoors, you don't have that."

When Beglarian encountered an 1862 poem by Emily Dickinson, its evocative opening phrase struck her as the perfect title for her piece. Its first two lines read: "A murmur in the trees — to note — / Not loud enough for wind." The remainder of the poem is a series of observations of barely perceived sounds and movements, hinting at the presence of a subject unusual for the poet: "little Men," or fairies.

Having borrowed only her title from Dickinson, Beglarian suggested to Marshfield composer and double bassist Evan Premo that he set the poem itself to music. Premo's own "A Murmur in the Trees," for soprano and two bassists, will also receive its premiere at the concerts. It will be sung by soprano and consummate song interpreter Mary Bonhag, Premo's wife, with whom he directs the chamber music series Scrag Mountain Music.

The Brandon concerts include walking tours of the town, led by the Brandon Historical Society, and a guest: Middlebury College poetry professor Karin Gottshall reading her own poems. Gottshall's first book, Crocus, won the Poets Out Loud Prize in 2007; her second, The River Won't Hold You, won Ohio State University Press' The Journal Charles B. Wheeler Poetry Prize in 2015. 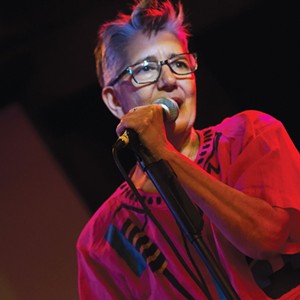 The concerts are presented through a partnership between Scrag and New Music on the Point, an educational summer gathering on Lake Dunmore for new-music composers and musicians. Beglarian met Premo and Bonhag at New Music and later participated in a 2019 Scrag program.

Hence Vermont audiences may already be familiar with Beglarian's inspirations, among which is a profound interest in the intersections of nature and human culture. Often, she focuses on literary works, including poems by Vermonter Louise Glück and the writings of Virginia Woolf.

Beglarian cited a trip she took in 2009. For four and a half months, she kayaked and bicycled the length of the Mississippi River, collecting sound recordings and residents' stories about their towns and their geography. One of her touchstones was a historical account she was reading of the 1927 flood, which affected the Mississippi as much as Vermont rivers. To Beglarian, the work resonated with images of the havoc wreaked by Hurricane Katrina in 2005, among people now additionally affected by the 2008 Great Recession.

"It felt like a one-person [Works Progress Administration] project," Beglarian recalled by phone. The trip was the genesis of her album Brim: Songs From the River Project, the recording of which features Vermont violinist Mary Rowell.

"A Murmur in the Trees" was spurred by a suggestion from double bass player Robert Black, a frequent collaborator with Beglarian. "Robert had the idea of 24 basses in a grove of trees and proposed that to me. I said, 'Absolutely, yes,'" Beglarian recalled.

The idea gave a new turn to a piece she had originally envisioned as a collaboration with a visual artist to be staged on Governors Island, N.Y., in 2020; the pandemic foiled that project.

Next came Beglarian's idea that the bassists should play notes derived from a scroll of birch bark she was given. "Across is time, up and down is pitch," Beglarian explained of the bark's natural lines, adding, "I had read a book that said the speed at which plant signals travel is one-third of an inch per minute. So this 10-inch piece of birch bark became the 30-minute piece."

A second collaborator, composer and music technologist Matt Sargent, devised a code to "render the tree bark as notation," Sargent wrote in an email. The Bard College professor came up with "additional code to then orchestrate the notes into contrapuntal parts for the basses."

The music is based on overtones — tones that are part of a harmonic series above a fundamental note and are "always beautiful" because they "create harmony," Beglarian said. Overtones also characterize the strings in the last part of Beglarian's ethereally beautiful "We Will Sing One Song," available on Spotify.

Beglarian envisions "A Murmur in the Trees" as a duet between the basses and "the ambience of a late summer afternoon — insects, birds, the lawn mower down the road. I'm praying there's no rain," she added. (The rain date for Brandon's concerts is September 12; there is none for Montpelier's.) 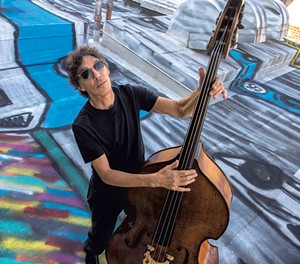 The bassists are coming from around the Northeast; Premo, who is one of the 24, spearheaded the effort to select and collect them. They will stand and play the first 15 minutes of "A Murmur in the Trees" while the audience moves around, forming their own experience of the work.

"It will be a 'choose your own adventure' kind of thing — more of an installation than a performance," Premo said by phone.

Then, one by one, the musicians will pick up their instruments and begin to move, eventually surrounding the audience. They'll receive cues for which notes to play and when to play them and shift positions through their earbuds, listening to individual sets of recorded instructions from Beglarian and Black.

Beglarian said she spotted the allée on her daily bike route from her Brandon house to her composing camp five miles away. With the help of New Music executive director Jenny Beck, she contacted its owners, Courtney and Devon Fuller, and learned that it was planted with trees 100 years ago to create a grand entrance to a former golf course. The spot struck her as "the perfect balance of human and natural."

The composer added, "For me, personally, it was really important to try to premiere ["A Murmur in the Trees"] in Brandon because it has become my home."

In contrast with Beglarian's "murmury" piece, Premo's is all pizzicato, or plucked strings, in the upper registers to convey the hurrying of little feet, he said. Premo and Black will play the piece's two bass parts.

Premo's interpretation of Dickinson's poem finds double meaning in the "little Men" to whom it refers. "She's speaking with such reverence of these small things ... This murmur in the trees for me is almost a buzzing of divine inspiration," he said.

Beglarian's music may be said to express the same reverence for larger-scale things: the sweep of history and the intertwined fates of nature and humanity.

"She's kind of a magical person," Premo opines. "She's this incredible connector and explorer of the world."

The original print version of this article was headlined "All the Basses | Scrag Mountain Music premieres a novel, nature-inspired work among the trees"