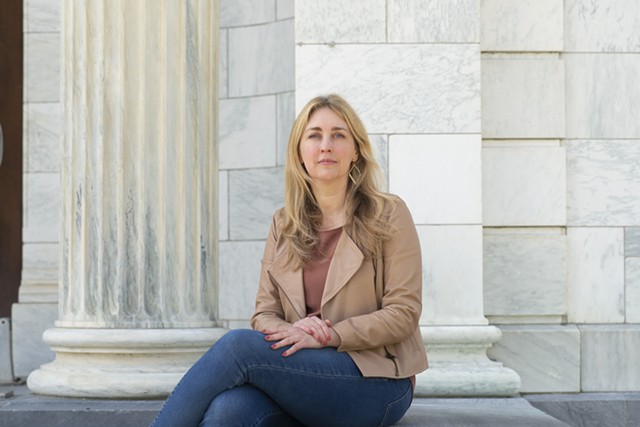 When a draft opinion leaked this week showing that the U.S. Supreme Court is ready to overturn Roe v. Wade, most people didn’t need to read past the headlines.

Middlebury College professor Caitlin Knowles Myers waded through the 98-page draft ruling — not for any special interest in the justices’ legal reasoning, but because she wanted to know whether they got their facts right. She stopped cold on page 61, where Justice Samuel Alito addressed how abortion access affects women’s lives, only to write that it was “hard for anyone — and in particular, for a court — to assess.”

Alito knew, or should have known, better, according to Myers. The professor was well aware that the justice had a mountain of evidence at his fingertips: She’d given it to him.

“That was a gut punch of a sentence,” she said.

Myers is an economist who, for the last 15 years, has studied how reproductive policy affects people's lives. She led an effort last fall, after the Supreme Court agreed to hear the potentially watershed case Dobbs v. Jackson Women’s Health Organization, to compile the best research in her field and present it to the justices. More than 150 economists signed an amicus brief she spearheaded, which cited much of her work. The brief details how advances in research methods have allowed Myers and others to measure the profound consequences of access to legal abortion over the last 50 years.

Alito, in his draft opinion for an apparently tentative majority, acknowledged the legal significance of the type of research Myers has been conducting. To Myers’ dismay, he also seemed to wave her findings away. The justices didn’t identify shortcomings of her research. They just declined to acknowledge it.

As the Supreme Court appears poised to allow states to criminalize a cornerstone of modern women’s health care, Myers’ research reveals the community-changing ramifications of that decision. Her work is getting more traction in the public square than it did in the court. Her model of abortion trends in a post-Roe America is now being widely cited as a window into an impending reality in which 75,000 more American women may experience premature or unwanted motherhood each year.

Myers said she did not set out to be “the abortion economist.” Having grown up in rural West Virginia and Georgia, the professor acknowledged some ethical ambivalence around aspects of abortion. Myers was trained as a labor economist with an interest in economic gaps that can be linked to gender and race. That focus quickly led her to women’s ability to control when they have children.

“They’re all inextricably linked,” she said.

The notion that abortion is an important health care option isn’t groundbreaking. But measuring how access to legal abortion affects women’s lives, and to what extent, is a trickier matter. It can’t be studied in controlled scientific trials, the most straightforward way of understanding cause and effect.

So how can we know whether access to abortion has opened doors for more American women, rather than, say, the availability of contraception? Economists have techniques to help disentangle possible factors and infer causation — not just correlation — in historical data. This often involves locating and comparing periods that approximate a controlled experiment. Economists call them “natural experiments.”

Myers has been at the forefront of applying these research methods to abortion policy. She found a natural experiment in the fact that several states repealed their abortion bans before Roe established a constitutional right nationwide in 1973. By comparing data from the different states over time, Myers concluded in a 2017 paper in the prestigious peer-reviewed Journal of Political Economy that expanded access to abortion reduced teen motherhood by 34 percent and the number of teen brides by 20 percent.

“The legalization of abortion dramatically affected when and under what circumstances American women became mothers,” Myers said. “It did so particularly for poor women, young women and women of color — women who had had the greatest difficulty accessing abortion when it was illegal.”

The age at which women become mothers is particularly consequential in America, which lacks universal childcare and paid parental leave policies. Having a child leads to dramatic drops in earnings of mothers — far more than for fathers.

The research questions Myers and others have been asking are relevant to the legal debates over abortion. A 1992 landmark Supreme Court ruling, Planned Parenthood v. Casey, established a principle that states could impose restrictions on abortion so long as they didn’t amount to an “undue burden” on women. And justices typically weigh the practical effects of overturning existing precedent when deciding how to rule.

In its challenge to Roe, the State of Mississippi argued in Dobbs that women no longer need access to abortion to succeed in their personal or professional lives.

“That was a moment for me, as the economist who studies this issue, to say, ‘We should tell the court what we know,’” Myers said.

Myers and her colleagues weren’t the only academics to weigh in. More than 800 scientists from public health, social sciences and economics signed on to a series of amicus briefs that offered empirical evidence on the significance of abortion access. The social scientists’ brief recounts a trailblazing 2008 project, known as the Turnaway Study, by researchers in California. It compares the life trajectories of women who obtained an abortion with a group that was turned away because the women were past their gestational limit.

The researchers were opposed by a separate group of more than 240 signatories, mostly lawyers and doctors, plus pro-life South Dakota Gov. Kristi Noem, who supported Mississippi’s position and criticized elements of the Turnaway Study.

Alito’s draft opinion drew criticism this week from the editorial board at the scientific journal Nature, which wrote that reducing abortion access “runs contrary to 50 years of research from around the world showing that abortion access is a crucial component of health care and is important for women’s equal participation in society.” Myers has also already created a model to project who would lose access to abortion if the Supreme Court overturned Roe. She published her model in conjunction with data reporters at the New York Times in 2019.

Myers’ analysis began with a map of publicly known abortion providers pulled from a database that her Middlebury students help her maintain. She deleted sites in the 25 states that are expected to outlaw abortion immediately should Roe be overturned, then calculated the distances women in those states would have to travel to obtain a legal abortion. Using existing research on how travel distances affect abortion access, Myers’ team was able to estimate that about one-quarter of pregnant women in states where abortion would become illegal would not be able to reach a provider, a situation that would disproportionately affect poor people and people of color.

According to Myers’ model, about 100,000 women in the first year post-Roe would want an abortion but wouldn’t be able to get one through a medical provider. Some of them would obtain abortions through other means, but about 75,000 would give birth, she estimated.

The numbers could be higher, Myers said, if remaining legal abortion providers couldn't handle the influx of patients from states where the procedure was outlawed.

Some of her most recent research indicates that’s a serious possibility. Earlier this year, Myers enlisted a team of Middlebury students to help determine wait times for abortion appointments across the country. They published their findings on the data news website FiveThirtyEight. The students called clinics in 44 states and the District of Columbia, posing as women who were six weeks pregnant. Some students encountered long hold times and full voicemail boxes. Overall, they found that one-third of clinics nationwide had wait times of at least a week. At 12 percent of clinics, the soonest appointment was more than two weeks out.

Senior Frieda Violet Thaveethu, an economics and computer science student who participated in Myers’ research, said she was shocked that even in states with liberal abortion policies, “we were seeing long wait times and difficulty getting access to a provider.” The waits could get worse post-Roe, Thaveethu said, and that would affect what kind of procedure a pregnant woman could obtain and how much it would cost.

Myers believes that the inflow of abortion seekers would be felt most keenly in states next to or near those that ban abortion. Places with cheap flights could become reproductive health care destinations, too. She doesn’t expect that Vermont would see a big spike, though the future is uncertain.

Abortion patients already travel to Vermont from other states, according to Lauren MacAfee, an ob-gyn at the University of Vermont Medical Center and assistant professor of reproductive health at UVM’s medical school. MacAfee said she’s seen young women travel from New Hampshire and Maine, which have parental notification requirements. Women have also traveled to MacAfee’s clinic from places such as Texas.

“There’s a whole host of different reasons that folks might choose to cross state lines, but usually they’re trying to access the service as easily and efficiently and quickly as they possibly can,” she said.

As a clinician, MacAfee said, she appreciates the abortion research that Myers and other scholars outside the medical field have been conducting. 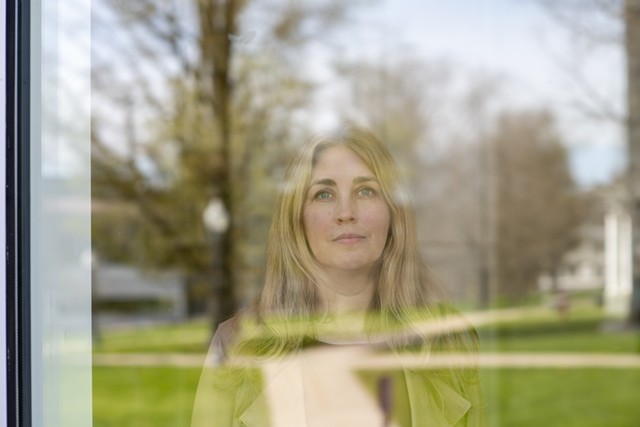 “She and other kinds of social science researchers bring their different lenses to the abortion movement to try to help recognize and understand what patients are going through and what implication some of these legislative actions will have on patient access,” MacAfee said.

Already, though, the prospect of overturning Roe is making abortion research more difficult. For her senior thesis, Thaveethu examined whether expanded access to abortion pills by mail during the COVID-19 pandemic reduced visits to brick-and-mortar clinics. The research proved promising, she said, but requires more data over a longer period.

As of this week, that data is harder to get. The day after Alito’s draft opinion leaked, news website Vice published a story contending that the data Thaveethu used for her research, from data brokerage firm SafeGraph, could be wielded by abortion opponents to track down women who cross state lines to obtain abortions.

In response, SafeGraph removed the data from its website, noting that, though its information is mostly used by researchers, removing it is “the right decision given the current climate.”