Scott's Session: A Political Success, But a Mixed Bag on Policy 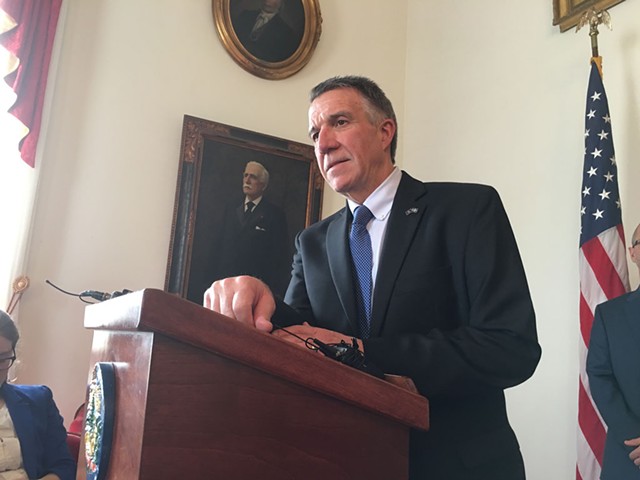 The 2017 legislative session has featured a distinctive pair of bookends — a matched set of budget proposals that required extremely quick action by a legislature not known for speed.

In January, Gov. Phil Scott proposed forcing school boards to level-fund their budgets and move the savings into his general fund priorities. That plan was pretty much doomed from the get-go, both inside and outside the building.

And now we have the other bookend: Scott's newly released plan for statewide negotiation of teacher health care benefits. This idea may not survive the last-minute rush, but it's proving to be a political winner thanks to a very simple pitch: to save taxpayers $26 million without harming teachers.

Around the Statehouse, just say "the $26 million thing" and everyone knows what you're talking about. Never mind that the Scott plan promises up to $26 million, and there's no guarantee that any of the savings, whatever the amount, will end up in taxpayers' pockets. In fact, Scott's plan offers a laundry list of possible uses for the money: investing in early childcare and learning, boosting the state college system, fighting opioid addiction, or possibly, maybe, cutting property taxes.

Eh, no matter. The only thing anyone can hear is "save $26 million."

Democratic leaders in the House and Senate have resisted the plan, largely on procedural grounds: It's too late in the session; there's not enough time; there are too many unknowns. Their points may be perfectly valid, but process arguments are obscure by nature. They can't hold a candle to "save $26 million" in the marketplace of ideas. Even if Scott loses the policy battle, he'll win the political war.

Herein lies one of the fundamental dualities of the Scott administration so far. Politically, Scott has been the dominant force of the session. He's kept his messaging simple. He has largely forced legislative Democrats to play on his home turf; they've never seriously challenged him on taxes or spending.

"I was surprised that the legislature fell into line as far as taxes and fees," says Sen. Kevin Mullin (R-Rutland).

Rep. Corey Parent (R-St. Albans) cites the example of a bill proposed by the House Natural Resources, Fish and Wildlife Committee that included $31 million in tax and fee hikes to help pay for water-quality improvements.

Young recalls his response to that question thusly: "Why would I stick my neck out just to have the governor chop off my head?"

Without even trying, Scott killed a bill with broad appeal to the Democrats' environmental base.

But on policy? The governor's record is mixed at best. He didn't get his way on level-funded school budgets. He is likely to lose out on most or all of his plans for new spending. The legislature turned down most of his government reorganization ideas.

It's enough to make you wonder: Could he have gotten more done? He won the election handily, and his political stock appears to have risen since then. Why not more results?

One version of the answer: He didn't necessarily want or need them.

"I think the governor had intended that the fewer bills that pass, the better," says House Minority Leader Don Turner (R-Milton). "Take a breather and let some of the stuff that's been passed in the last six years play out."

Which is fine and all, and it was definitely half of Scott's campaign message: Let's pause for a while, stop being first on everything and just try to better manage what we've got.

But then we had candidate Scott who depicted a crisis-ridden Vermont facing a bleak future — a Vermont in need of a thorough shake-up. The adjective "bold" was endlessly brandished. That half of the Scott agenda failed to take hold.

There are rumblings in the building, loud and persistent, that communication with the legislature has often been lacking — and, more specifically, that Scott's legislative messengers have been largely AWOL. The two main go-betweens are chief legislative liaison Kendal Smith and secretary of civil and military affairs Brittney Wilson.

Regarding Scott's legislative team, Sen. Ann Cummings (D-Washington), chair of the Senate Finance Committee, says, "I haven't really met any of them. In past years, the governor's legislative liaisons were in the building a lot. Not true this year."

"It took two days for someone to get back to me," he continues. "Finally Kendal got back to me and said, 'We have a meeting set up.' So I go over there, and the person I met with was Kendal. The governor wasn't there."

Meeting with Smith is fine, but Sharpe had asked for the governor. And it shouldn't take two days for a key lawmaker to get a meeting with the person whose full-time job is communicating with lawmakers. Nor should it be tough for an influential committee chair to get a few minutes with a governor who professes an open-door policy.

This could be dismissed as mere partisan sniping, but Sharpe insists that's not the case. "My first couple of terms in the legislature, I served under the Douglas administration," he says of Republican Jim Douglas, "and there was a lot more communication between the legislature and the governor's staff. I saw them in the cafeteria and in the building all the time."

Republican comments on the subject are more oblique but veer in the same direction.

"I haven't had any frustration working with the administration," says Mullin. "But it did seem like it was more my having to reach out to them than the other way around."

Many Republicans insist there's no problem with legislative relations — but they are quick to offer excuses for this, ahem, nonexistent problem.

"[The governor] has several new people in key roles," says Turner. "I think there's a learning curve there. It's getting your feet wet. It's knowing the players — who you can talk to and who you can't."

Of course, the best way to get your feet wet is to jump into the pool. By most accounts, the legislative team has rarely left the locker room.

Many of the governor's fifth-floor staffers, including Smith, Wilson, and spokespeople Rebecca Kelley and Ethan Latour, are in their twenties or thirties. Chief of staff Jason Gibbs was a wizened 40 when he took office. Some Republicans cite the youth of the fifth-floor staff as an explanation.

"The team is young and new, and they don't know anything," says Sen. Carolyn Branagan (R-Franklin). "They were campaigners for him. They're good people, but they're young and they have a lot to learn."

So why did the governor assemble a largely untested inner circle? He could have sprinkled a little more gray hair into the mix.

Sen. Joe Benning (R-Caledonia) offers a creative take on the lack of communication: the "totally new approach" by Team Scott as opposed to the MO of Scott's predecessor, Democrat Peter Shumlin.

"I was used to either Shumlin or his hirelings being involved in virtually every committee," Benning says. "Here ... not only is the governor backing off, but you don't get the sense that everybody on his staff is breathing down your neck."

Good try at turning lemons into lemonade, but the underlying truth remains: Scott's legislative team is notable mainly by its absence. And when its members are representing a governor with plenty of political muscle, one has to think they'd have no trouble getting a hearing.

Seven Days put the communication question to the administration, and Kelley replied with a written statement.

"As Vermonters have seen throughout his entire career, Governor Scott has always had an open door policy, as does his Administration," she wrote. The administration will continue to work with legislators on priorities such as economic growth, she added.

The last word on this subject goes to the panjandrum of the senate, Dick Mazza (D-Grand Isle). Although he's a Democrat, he is one of Scott's closest allies and most ardent supporters. Mazza won't cast any aspersions, but he drops some unmistakable hints.

Scott's fifth-floor team, he says, has "got to hit the ground running in the next session with the ability to communicate with legislators, because that's what it's about: relationships that you build.

"I hope after the session to sit down with the governor and have a discussion," he continues, "and voice the concerns that I've heard around the legislature. I'll just voice my concerns, and others will as well, but the buck stops with him.

"Let me tell ya, knowing him, he's kept notes," Mazza concludes. "He knows exactly what he wants to do. I'll bet you before next session, not that he'll have a whole new staff, but I'm sure he'll have a meeting with everyone and tell them his expectations."

For the ever-circumspect Mazza, that's tantamount to shouting "Fire!"

All that being said, this is no threat to Scott's political standing. It may have cost him a few victories, but his core appeal remains intact. He's seen as a nonthreatening, competent manager — offering Vermonters a "breather" from activist government and putting up a roadblock against new-tax ideas. That spells success for a lot of Vermonters.

For any Democrats thinking about challenging Scott in 2018, this legislative session has offered nothing but cold comfort. Scott can claim victory on his core mission. And, so far, the legislature has failed to advance bills on signature issues such as marijuana legalization or the $15 minimum wage that might have sparked energy on the left without directly affecting the state's budget.

Process failures and fifth-floor inadequacy notwithstanding, Scott is the big winner of the 2017 session. At this moment, it's hard to imagine any credible Democrat or Progressive challenging him next year.

The original print version of this article was headlined "Scott's Session"