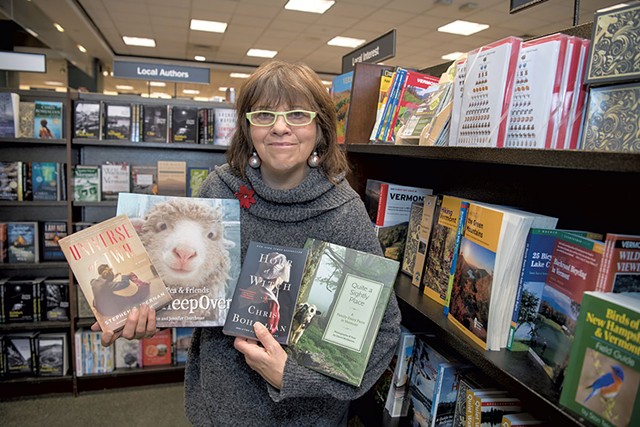 Danielle Duerr had only recently started working at Barnes & Noble in South Burlington when a customer asked her to recommend a history book. The request flustered Duerr because, as she explained later, "When a stranger comes up to you ... they might not like what you read. I was struggling."

Scotia Jordan, a veteran employee, was nearby and ambled over to help.

"She saw me floundering a bit, and ... the three of us had a really great conversation," Duerr recalled. "It gave me confidence that I could do this."

A few weeks ago, Jordan walked out of the Dorset Street store as a customer rather than an employee — for the first time in 25 years. To her many followers, Elvis had left the building.

Legends of retail are scarce in this era of no-contact shopping, where customer service has devolved to "Tap or swipe?" As a bookseller, Jordan was defiantly old-school, playing the roles of literary savant, shrink, confidante or just friend, someone eager to share her knowledge and passion for joining reader and book in a relatively brief but satisfying union.

"You have to read your customers, get to know them," Jordan said during an interview. "You can't just hand them a book and say, 'Try this.'"

Jordan's other constituency — equally bereft at her departure — is composed of local authors such as John Churchman, Jennifer McMahon and Chris Bohjalian, for whom she acted as a friend and booster. Sixteen years ago, Jordan took over responsibility for ordering and stocking Barnes & Noble's local authors' table. "I loved meeting the wide variety of authors and promoting them," she said.

Over the summer, Nate Methot of South Burlington came in and asked Jordan if Barnes & Noble would carry his book, A Life Derailed: My Journey With ALS. "I was moved by his courage," she said, "and I got the store to buy copies for me to display on the table. It sold well."

During a recent visit by McMahon to sign copies of her latest book in a back room, Jordan persuaded the author to come out and do an informal meet and greet with customers.

"You have to read your customers, get to know them." Scotia Jordan tweet this

Given his national reputation, it's easy to forget that Bohjalian was once a household name only in his own home. In 1998, some months after its publication, Bohjalian's Midwives was selected by Oprah Winfrey for her book club.

"Chris, who wasn't very well known then, was scheduled for an appearance" at the store, recalled Jordan, who managed the event. "We had people lined up outside the store; we couldn't control the crowd."

It was the beginning of a friendship.

"Booksellers are a rare and wonderful breed: No one goes into bookselling for the money," Bohjalian told Seven Days. "They do it because they care deeply about what stories can mean to the soul. Scotia shared her love of literature with readers."

Jordan started as a seasonal employee at Barnes & Noble just before Christmas 1997. When she was hired, the store had another employee whose name was Nova. If having employees named Nova and Scotia was the then-manager's attempt at a cosmic joke, it sure turned out well for the store.

Jordan's name came courtesy of her father's Scottish ancestry, she said. He died when Jordan was 6, so all she has of him is the name.

"If I'd been a boy, my first name would have been Scott, and my middle name Lynn," Jordan said, ruefully. "Thank God that didn't happen."

She was raised in Norwalk, Conn., and New Hampshire by her mother, Evelyn, who sang professionally with big bands under the name Lynn Paige. From her mom, Jordan got a love for music; she learned guitar and sang informally. She also showed early signs of bibliophilism.

"She developed this thirst for knowledge that was nearly obsessive," said her older brother Charlie Jordan, a writer and editor living in New Hampshire. He recalled a morning when Scotia came down to breakfast bearing a weighty tome about Glenn Miller, a famous bandleader in the first half of the 20th century. "She was 11," Charlie marveled. "Scotia just bubbles over with information."

Jordan's music obsession led her to several retail stints at music stores, including a Strawberries in Connecticut and Upstairs Records in Burlington, both now defunct. As for bands, she was a Kinks-head, not a Deadhead — a fervent fan of '60s English rockers the Kinks, led by the brothers Davies.

"When she found out Ray Davies was having a songwriting seminar in London [in 2009], she flew to England to attend," Charlie noted.

Jordan shuttled between jobs and locales in New England. In the 1980s, she worked at Burlington rock club Nectar's and wrote music features for Goldmine magazine and the Philadelphia Inquirer. Several friends who operated food carts on Church Street asked Jordan to fill in.

After a few years of part-time gigs, someone told her that Barnes & Noble, which had opened in 1995, was looking for seasonal help. At the time, she was an avid reader of historical fiction, thrillers and humor. Jordan applied and began working in October 1997, and the rest is history — and biography and philosophy and literary fiction.

"It was a fun place to be; the place really popped for years," Jordan said. "There was no Borders [bookstore]; Amazon was new. But there was Barnes & Noble."

(Jordan said she has never ordered anything from Amazon, which places her in elite, possibly nonexistent company.)

Barnes & Noble of South Burlington does not have the gravitational pull of, say, the bookseller's flagship Fifth Avenue store in New York City. But in 1998, it had David Sedaris, and the onetime Christmas-elf-turned-comic-sensation caused a scene worthy of a rock star.

"He was upstairs, sitting by a window, and people could see him and were lined up all around the block," Jordan recalled. "We had 150 or so inside — whatever the fire marshal said — and he pulled out a pack of Marlboros. 'I don't suppose this would be a good time to light up,' and everyone just laughed and laughed. It was memorable."

The joy Jordan derived from these events infused her interactions with customers. Angela Simpson, who was an employee at the store when Jordan arrived, said the newbie quickly became a presence.

"She's a character," Simpson said during an interview. "Scotia is one of those people who has one face, and she shows it to everybody. There's no dissembling."

Jordan's was the face seen suggesting books on grieving or consoling a customer in tears who had just lost a loved one. The same face lit up when she shared her knowledge of music or gardening. Her face remained alive and welcoming, but Jordan, 63, recognized that the physical demands of the job were adding up.

"There comes a time when you need to shift gears," she said, "and I was tired of lugging 40-pound boxes of books around."

Jordan is not ready for full-time gardening just yet. Her favorite author, F. Scott Fitzgerald, once said there were no second acts in American life. Jordan is embarking on a third. Not long ago, she walked through the doors of Snowflake Chocolates as a customer and emerged as an employee — the soon-to-be manager of the South Burlington shop, to be precise.

Sharon Wintersteen, manager of the local, family-owned chocolatier, said she immediately recognized Jordan as a rare lifer in an itinerant vocation.

"You don't have that kind of staying power in retail unless you're invested in it personally," she explained. "Her heart and soul was in bookselling, and I know that her heart and soul will be in selling my chocolate."

Jordan said she always thought of bookselling as "handing the customer a life experience." And then she added, "Maybe I can do that with chocolate, too."

Disclosure: Angela Simpson is a proofreader at Seven Days.

The original print version of this article was headlined "Best Seller"