Sci-Fi Thriller 'Reminiscence' Is All Too Forgettable 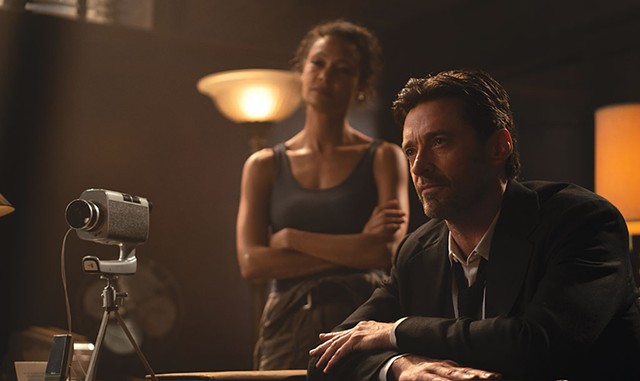 There was no box-office gold this past weekend for Reminiscence, a sci-fi spectacular from writer-director Lisa Joy (cocreator of HBO's "Westworld" series) about a futuristic device that enables people to relive their memories in cinematic detail. But the high concept was irresistible to me, so I checked out the film, currently playing at many local theaters and streaming on HBO Max.

In an unspecified future year, residents of Miami ply boats through the streets and live nocturnally to escape the burning sun. The rich monopolize the "drylands," leaving the poor to fight over scraps of the flooded metropolis.

All the interiors of this future city appear to have come straight from a mid-20th-century noir movie, full of lazily turning ceiling fans (has AC been outlawed?) and art deco light fixtures. This is particularly true of the well-appointed apartment where Nick Bannister (Hugh Jackman) sells his clients access to their own pasts.

Nick and his colleague, Watts (Thandiwe Newton), operate a machine that induces flawless recollection of selected memories. The dire state of the world, he notes in his voice-over, has turned nostalgia into "a way of life."

Into Nick's present slinks Mae (Rebecca Ferguson), a torch singer in a dress that even Jessica Rabbit might consider a little constricting. They fall in love — and then she vanishes. Nick goes in search of her, both in the real world and in his memories, but the truths he discovers may turn his fond reminiscences to bitter ones.

I wanted to like Reminiscence because it's so rare these days to see an original concept reach the screen as a big-budget movie, and even rarer for that movie to be written and directed by a woman. But I soon discovered that Joy's screenplay is "original" only in the technical sense of the word.

Is it still exciting to see a boldly imagined, digitally realized vision of the future in a non-superhero movie? Yes! Did all the world building give me a little thrill? Yes again! But then we get to the plot and characters of Reminiscence. And the movie collapses into a pastiche of film noir — not the actual classics of the genre, but their '80s and '90s knockoffs — without the saving grace of self-awareness. If you tossed Blade Runner, Streets of Fire and some Christopher Nolan movies into a blender and threw out everything that was genuinely edgy or unexpected about them, this is what you'd get.

The story pivots on Nick's longing for Mae, an obsession that brings him back to the memory tank time after time. Unlike many similar films, Reminiscence doesn't play with the permeable boundary between real and unreal experience. Memories are reliable here, and we always know whether we're seeing past or present. Accompanied by many portentous references to Orpheus and Eurydice, Nick undertakes a quest into Miami's criminal underworld, not into his own mind.

Fair enough — not all science fiction has to be mind-bending. But the object of the quest is such a caricature of a femme fatale that it's hard to care whether Nick finds her. One of the best parts of "Westworld" was watching female androids who'd been programmed to serve men's desires start to develop their own personalities and agency. Though Ferguson is skilled at channeling the young Kathleen Turner, her Mae seems to be stuck at the pleasure-bot stage.

Nick himself isn't much deeper. He and Watts are veterans of a vaguely described "border war," a backstory that mainly serves as a pretext to make them badasses who can hold their own in action scenes. (Those action sequences are passable but nothing terribly exciting.) Nick's war service also gives him license to be jaded and world-weary and bemoan the rottenness of everything in an overwritten voice-over that never stops. "To find ... Mae," he intones, "I had to go to hell itself."

The dialogue is just as purple. Despite all the corruption and class consciousness on display, this is closer to Elysium (Neill Blomkamp's heavy-handed 2013 dystopia) than to the grittiness of Chinatown. Rarely does anyone chat like a regular human being. The movie's best line belongs to Watts, because she sums up the core problem with Reminiscence itself: Nick's great love isn't a person but "an idea in a tight dress."

If hyper-serious, hyper-stylized pastiche is your jam, Reminiscence might be for you. The rest of us may find ourselves forgetting it in short order.

Strange Days (1995): Reminiscence owes a lot to Kathryn Bigelow's futuristic thriller about a device with which people can record and play back their sensory experiences. An expensive bomb in its day, the frenetic flick now seems prescient. I couldn't find a streaming source for it, but check YouTube — or your dusty bargain-bin DVD collection.

Inception (2010; Netflix, HBO Max, rentable): Nolan (whose brother Jonathan is married to Joy and produced Reminiscence) is the only director in recent memory to score hits with original sci-fi concepts. This one has sequences that nail the elegiac dreaminess that Reminiscence seems to be shooting for.