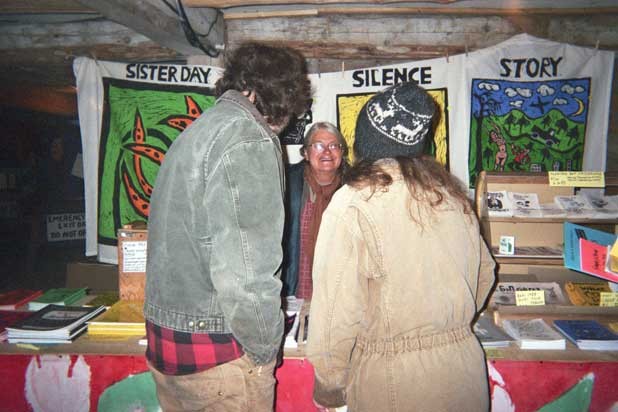 The last time I was at Bread and Puppet, I cried. I was about 8 years old and terrified by the puppets at the museum - hulking representations of the grotesque, the pained, the forgotten.

Fifteen years later, I returned to Glover to attend the 7th annual "Political Leaf-Peeping" performance - B&P's final performance of the 2008 season at its rural home. The experience made me nearly weep for a different reason: that the 45-year-old company still has so much to protest.

The three-hour informal program began on the top floor of the museum amid huge caricatures of British kings, Indian chiefs and Vietnamese mourners, to name a few. Elke Schumann, wife of B&P founder Peter Schumann, led shape-note singers through pious texts to the tunes of ballads and jigs. The songs sounded both melodic and dissonant, with an archaic quality that sat in the gut.

Meanwhile, Peter cut through huge loaves of sourdough rye bread baked earlier in the day. Generously dousing each piece with garlic and oil, he doled out thick slices to adults, who cupped their hands to catch the oil, and to children, who dribbled it onto chins and jackets.

The group of singers moved outside, followed by spectators clad in wool, flannel and fleece against the chill. Outdoors, audience members chose from a pile of mismatched mugs and helped themselves to huge pots of hot tea.

The theatrical segment began with "The Real Life Adventure of Go-Go Girl Episode 24: 'Where's My Fucking Bailout?'" - part of an allegorical tale in which our heroine almost kills Nancy the goat for eating her crops. Then came satirical sketches such as the "Federal Cookbook" and the "Plunging Plumbing Team" - a trio of dancing bears saving the U.S. economy armed with toilet plungers.

Afterward, the crowd was invited back into the barn to watch a hauntingly beautiful work-in-progress skit called "Storm Office: A Storm Poem with Implementation Machine."

I didn't run whimpering from the museum, but I still found the puppets unnerving. Schumann looks older and tired, but keeps baking bread and inspiring new generations of performers to - as a trio of B&P posters proclaims - "Awake. Listen. Resist."