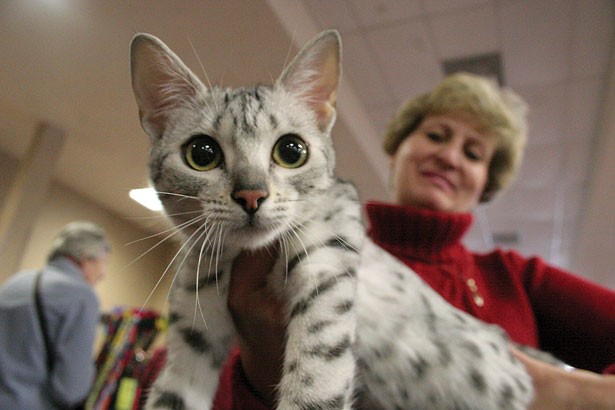 I grew up with a beloved Irish setter and now allow an equally beloved, 20-pound Siamese to sit on me at every opportunity, so I've never bought into the idea of the world's neat division into "dog people" and "cat people." After a few hours wandering the aisles at the Vermont Fancy Felines Club's annual show, though, I'm willing to consider folks who are committed to raising and showing any animal a breed apart. Think of the commitment: Some of the people primping furry, purebred princesses with brushes and baby powder in the Sheraton's exhibition hall had traveled from across the country, hoping their critters would meet specific breed standards of shape, color and size. Several French-speaking owners of Quebecois "catteries" toted their prized chats across the border.

Eleven rows of airy cages held individual cats representing more than 20 breeds, from Abyssinians to Turkish Angoras. Visitors were allowed to peek inside, from a respectful distance. Maine Coons hulked, and wrinkly, hairless Sphynxes inspired shivers. In one cushy setup, Persians lolled on leopard-print hammocks, their flat faces making them look perpetually disgruntled. I'd missed the twice-daily "parade of breeds," so I decided to watch some of the end-of-day competitive rounds. At the Shorthair Kittens ring, Judge Pam Moser held up #46, a small, smoke-gray cat with delicate limbs: a Russian Blue. Running her hands along the kitten's spine, Moser explained that judges look for ideal characteristics in each breed, but "everyone has their preferences."

In the ring next door, 12 beautiful-but-not-purebred cats competed in the Household Pets division. A blue-eyed, chocolate-point Himalayan named "Miss Nutella Winkles" ("Nutty" for short) took runner-up, and first place went to "Winston," a portly gray cat with a distinguished white waistcoat. I was pulling for "Peekaboo," a kitty that didn't place - he had a Siamese shape with small gray leopard spots and wild tufts of hair in his ears. After all, if cats lion-ize their owners' homes, who wouldn't want a miniature lynx?