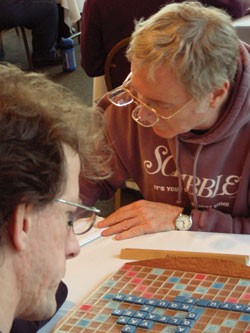 To purists, the move was a masterstroke. With an “RE” and an “R” on the board, separated by seven spaces, a veteran player at last weekend’s 2nd Annual Green Mountain Scrabble Challenge neatly plucked every tile from his rack of seven to complete the word “RECONSIDER.” A 13-year-old boy animatedly discussed the move with a group of thirtysomethings, recalling an improvisational play of his own a few moments before. With just “_ _ L _ _ _ Y S” to work with, and needing to plug into three other words, he performed Scrabble alchemy by playing “BALONEYS.”

Sherrie Saint John, co-director of the Challenge, smiled as she recalled both moments. A resident of Manchester-by-the-Sea, Mass., who has directed many such tournaments, she was attracted to the Vermont version by that brand of inspired play. “It’s not that difficult to imagine simply completing a four- or five-letter word when you already have the first two letters on the board,” she suggested. “But to be able to think multidimensionally like that, with the pressure of a tournament match and time constraints . . . amazing.”

Since its creation in 1938 by architect Alfred Mosher Butts, Scrabble has sold 100 million sets in 121 countries and 29 language variations. The 10,000-member National Scrabble Association sanctions some 250 tournaments and more than 300 clubs in North America alone. The Vermont event drew players from as far as California — a particular triumph for co-director Jane Whitmore.

“It was a gamble,” she conceded. “There was no guarantee that we’d get good attendance, but in the end we just thought, ‘If we build it, they will come.’”?And they did. Seventy-six players — 15 from Vermont — came hoping to win one of the four divisions, which are divided according to skill level. First place in the “A” division brings a trophy and $400, but to serious competitors, winning is more about raising a player’s rank in order to compete in higher divisions. The Holy Grail would be a chance to play at the U.S. Scrabble Open or the World Scrabble Championship.

“I’m just thrilled that we have an event of our own,” Whitmore said. “There are very few venues . . . in which an 80-year-old can compete against a 13-year-old, and both will have a wonderful time.”