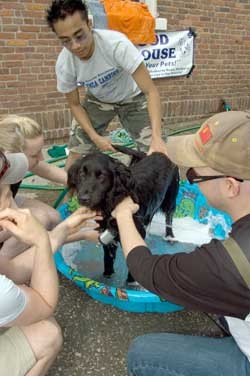 The dog days of summer were off to a fresh start Saturday in downtown Burlington. My new puppy was at the vet, but I still took the chance to visit some four-legged friends including Jack Russell terriers, golden retrievers and various mixed breeds at the “Scrub-A-Pup” YMCA fundraiser.

A volunteer named Julia told me that the idea for the dog wash came as a creative alternative to a car wash. Plus, as an organization all about family, it seemed right to include the beloved family pets.

“In case I didn’t want a dog already, now I really do!” added Julia.

She also informed me that all donations from the dog wash support the YMCA scholarship program, which helps the 25 percent of members who receive financial assistance. And I was impressed to learn that the YMCA was going green by using organic shampoo for the event.

With the brick College Street building serving as the backdrop, a row of six blue kiddie pools invited dogs to bathe on this comfortable summer day. Jetson, a 1-year-old Goldendoodle, served as the unofficial YMCA mascot and greeted everyone.

Generally the dogs responded like Duvel, a white shepherd-greyhound mix. Though he nervously attempted to escape at first, the pooch came to enjoy the pampering. The bath ended with a bright-orange towel-dry, but not before Duvel sprayed onlookers — myself included — with a big shake. But in this dog-loving crowd, that resulted only in a round of laughter and joking from everyone present.

After their baths, the dogs wagged their tails and sniffed around a makeshift canine treasure trove, complete with goody bags offering bandanas, Frisbees and free biscuits made by kids at the YMCA.

Due to the success of the event, the Y plans to host another “Scrub-A-Pup” in August. And I’ll be sure to bring my own four-legged friend to share in some good, clean fun.