Scene@ Music in the Meadow 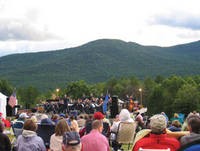 “America the Beautiful” was an apt beginning to the Air Force pop orchestra’s concert Sunday evening on the Trapp Family Concert Meadow. The mixed crowd of locals and vacationers happily stood up for the patriotic warhorse, perhaps because of the event’s proximity to a certain holiday. As the all-American songs streamed forth — from “Boogie Woogie Bugle Boy” to “Yankee Doodle Dandy” — the crowd seemed content to put aside possible political frustrations and disagreements in favor of good old-fashioned Independence Day celebrating. A stunning mountain vista surely helped to create the mood.

All 48 musicians were dressed in full Air Force uniform, and their presentation was, well, military-esque. It was also surprisingly lively and professional.

The concert, in honor of the Air Force’s 60th anniversary, felt like a bit of a time warp. Aside from the more recent “Proud to Be an American,” the song selections mainly seemed to be from the 1940s. And as the over-the-top icing on the cake, a trio of silk-gloved and gowned gals, The American Belles, took the stage for some swinging medleys as well as monologues depicting various U.S. historical female personages. Clad in red, white and blue, the ladies — introduced as Heather, Linda Sue and Victoria — eagerly led the orchestra, even as the audience hesitated over military theme songs.

Make no mistake, this event was not about supporting the war, nor even supporting the troops. Rather, it felt like: “Three cheers for America! Three cheers for our military! Aren’t old songs great?” In the chilly evening air, many heartily clapped along; some even danced a bit. As promised — and expected for a Fourth of July preview — the finale included some festive “rockets’ red glare.”