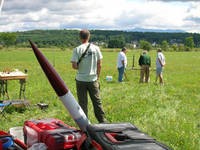 Big, puffy clouds caused the sun to play peek-a-boo as a gentle breeze ruffled the grass in a huge field full of dandelions and red clover. I watched as hobbyists threaded their rockets onto guide rods on a portable, aboveground launch pad, connecting the igniter fuses to little clips at the bottom. Long wires hooked up the pad to a switchboard console several feet away. “Range is cold — load ’em if you got ’em!” someone shouted.

Under an open-sided tent, Champlain Region Model Rocket Club president Howard Druckerman hunched over two folding tables full of tubes, engines and igniters, patiently stuffing gray-brown cellulose insulation into a 1-inch-diameter cardboard cylinder that would soon be skybound. “We call this stuff ‘dog barf,’” he said, “because that’s really what it looks like.”

Druckerman explained that the insulation forms a fireproof plug between the rocket’s little plastic parachute and the timed charge that would eject its nose cone so the parachute could unfold. He finished loading the bright-yellow, pencil-shaped “Sky Writer” rocket — created from a kit — and I realized it literally had my name on it, and “SEVEN DAYS” on the other side. “Go ahead!” he encouraged. Making a countdown and flipping the switch turned me on to why the 15 or so kids, teens and adults present found rocketry so fun: Seeing something suddenly hurtle hundreds, even thousands, of feet upward is pretty exciting.

Everyone cheered whenever a parachute opened successfully at the top of the flight arc. If it opens late, the resulting force could damage the rocket; if it fails entirely, you might get a “lawn dart” or, if the nose cone comes off, a “core sample,” with turf packed into the rocket’s hollow center.

Safety is paramount, given the explosive nature of the sport. Strict procedural guidelines dictate what can happen when; the club files a notice with the FAA prior to days they plan to fly, and any untested or unpredictable rocket calls for a “heads up” warning.

Most of the rocketeers seemed to rely on purchased kits or components, but some had constructed their own. My favorite? Pie plates stacked to form a UFO-like vessel that, when launched, spun and smoked as impressively as any model on a 1950s sci-fi film set. Rocket science? You bet.