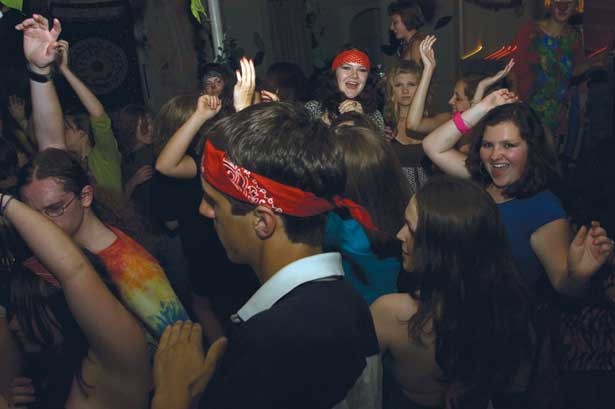 A thunderous pulse emanated from the foyer of the Unitarian Church as I arrived Friday night. The double doors were propped open and long beams of light sprayed into Main Street like machine-gun fire. As I inched up the stairs to the door, I remembered: It wasn't the apocalypse I was attending that night, but rather a "Hot Jungle"-themed electro-dance party.

A benefit for the Xixuau Reserve in the Brazilian Amazon, the event was organized by 2007 Montpelier High School graduate Jamie Venmar. She now lives in the Amazon, but is back in Vermont for the summer working and raising money for the region. As the two of us stood in the foyer - adorned with vines and leopard-print tapestries - Venmar told me how the proceeds from the dance would help provide livestock, a floating garden and other basic necessities for the people of Xixuau.

After our brief interview, Venmar - or DJ Yara, as she called herself that evening - returned to her post as the evening's MC, and I was left to navigate the "Hot Jungle" on my own. So I pushed aside some vines and stepped into the indigenous romp.

The sounds of birds and insects were replaced with the heavy throb of techno beats, and instead of rain there were strobe lights. A fake parrot in a cage hung where the disco ball should have been; rubber snakes were camouflaged among the wires of the DJ table; and exotically costumed teenagers populated the dancing habitat.

I noticed a girl dancing on a platform in the middle of the floor. She was wearing a wig akin to Uma Thurman's in Pulp Fiction, while sporting sunglasses and a shiny mermaid outfit. She seemed more in tune with her inner jungle than did most of the boys in attendance, although two did show up in fur togas.

As for myself, I wore a black T-shirt covered in dog hair - the result of a wrestling match I'd had with my spaniel before I left home. Combined with my beard, I thought I looked hairy enough to be a jungle animal.