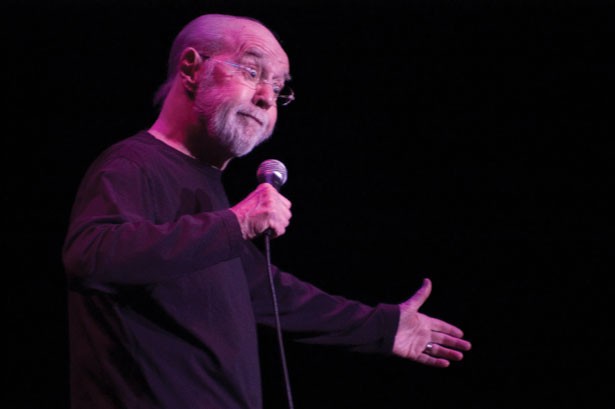 If any human being ever deserved to copyright a word or phrase, "fuck" should be George Carlin's. No single person has explored its many meanings and usages as comprehensively as the 70-year-old comedian, and few, I imagine, have uttered it with such frequency. From "Fuck Lance Armstrong, fuck Tiger Woods and fuck Dr. Phil," his opening line at last Saturday's performance in Burlington, to his gracious farewell - which, oddly enough, was expletive-free - Carlin expertly thrust and parried his way through an hour's worth of new material, eloquently wielding the word as if a verbal épée.

In Carlin's hands, "the queen mother of all swears" is less an obscenity than a tool used to deftly amplify the absurdities of contemporary American culture. He was in fine form, surgically flaying societal conventions with calculated ferocity. From the pseudo-wisdom of new-age bumper stickers to the illegitimacy of the current presidency to the fallacy of religion, no topic was safe, and everyone - and their mother - was fair game.

Like the late Bill Hicks, or even Andy Kaufman, Carlin's greatest strength is his ability to make his audience squirm. And in between the chuckles and belly laughs, a subtle undercurrent slowly wound its way through the aisles of the stately theater: He's not talking about them, he's talking about us. In many corners of the theater - including my own - the revelation turned guffaws into gasps. It was brilliant.

Behind Carlin's veil of blasphemy lies carefully constructed, searing satire. As the adage goes, "It's funny because it's true." But there's another saying, in this case equal in its poignancy: "The truth hurts." Even when delivered with a few well-placed curses.

Some artists work in watercolors, others in oils. Some take photographs, others sketch in pencil or charcoal. George Carlin paints his portraits in profanity - in particular the "F-Bomb." And as last Saturday's performance unequivocally proved, there are few moments in life more compelling or satisfying than witnessing a master craftsman at work.