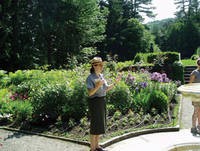 I’ve lived in Woodstock for almost four years now and have never taken the time for a proper tour of the mansion and grounds of the Marsh-Billings-Rockefeller National Historical Park. This sylvan oasis, which is the country’s only national historical park, is all about farming and conservation. Not modern farming, but the way it was done in 1870 when Frederick Billings purchased the land from George Perkins Marsh, one of the modern world’s first conservationists.

In addition to the Billings Farm, there is Mt. Tom, a 555-acre forest with carriage trails that Marsh saved in the mid-19th century from the voracious appetite for timber then in vogue. I was familiar with all of this before I signed up for a tour entitled “Conservation’s Spiritual Roots.” What I learned during the peripatetic lesson, however, was not an aesthetic adornment to my knowledge of the park but the strong foundation it never had.

Where does the idea of conservation come from? How did it inform the people who would go on to protect thousands of acres of irreplaceable land into perpetuity? Those were the basic questions tackled by Jean Elizabeth Shockley, a park ranger with a perfect background for such lofty ponderings: biology and divinity. Why divinity? Because conservation of natural resources can be traced back to the Native Americans, who believed that the animals were inhabited by spirits of humans and thus should be respected, revered and not wasted.

The tour began in front of the mansion, which sits on a finely manicured hill overlooking Woodstock Village and the Ottauquechee River valley, a rich alluvial plain where the Abenakis used to plant vegetables. Shockley explained that the tribe had the capability to take more resources than they could use, but chose not to, believing that they belonged to the land and not the other way around.

Inside, Shockley showed us numerous landscape paintings created by artists of the Hudson River School. They were dark, placid and supposedly suffused with a message of conservation. We tiptoed through the rooms and were asked to sit on the black stools provided rather than the other furniture. Shockley quoted Thoreau, John Muir and Aldo Leopold. She told us about the Billings family, and then the Rockefellers, who lived in the house until 1996, when they donated it to the National Park Service. The tour finished in the fern-feathered waterfall garden behind the mansion, a good place to listen to the gurgle of water and meditate on the duality of robber barons and conservationists, and how they can sometimes be one and the same.