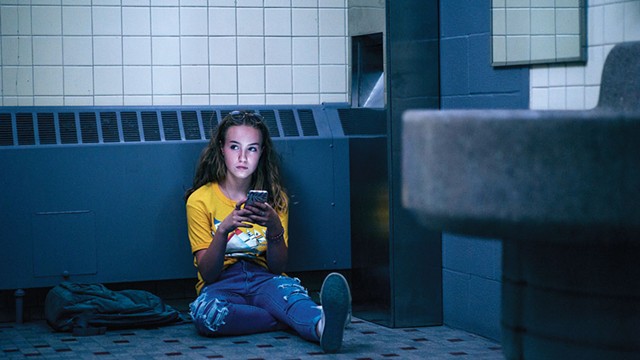 Our streaming entertainment options are overwhelming — and not always easy to sort through. This Friday, Vermont International Film Foundation's Virtual Cinema opens three new films, including the 2020 Québécois drama Les Nôtres ("our own"). The province has a thriving film industry, and director-cowriter Jeanne Leblanc has worked as an assistant director on productions ranging from X-Men: Apocalypse and Source Code to indies such as Xavier Dolan's Laurence Anyways. This is the second feature she's helmed. Watch it through July 31; more info at vtiff.org.

Thirteen-year-old Magalie (Emilie Bierre) recently lost her dad to a factory collapse that took many lives in the close-knit town of Sainte-Adeline. The mayor (Paul Doucet), who is Magalie's next-door neighbor and her mom's employer, has rallied residents behind the cause of a commemorative park.

But the town's collective good feelings evaporate when a blood test taken at school reveals that Magalie is pregnant. Pressured by her frightened and confused mother (Marianne Farley) to name the father, Magalie refuses and retreats into a sullen silence. As news of her condition spreads, former friends shame and bully her.

The suspicion of paternity falls on one of Magalie's friends, a boy fostered by the mayor and his wife, who is viewed as an outsider and routinely attacked with racial slurs. As the town unites against him, only the viewer is privy to the disturbing truth about the father of Magalie's child.

There's cringe comedy, and then there's cringe tragedy. Les Nôtres qualifies as the latter, or would if it offered any catharsis. Leblanc's film makes the audience complicit in a terrible and all-too-common secret — the real identity of the person who sends Magalie sexy texts and calls her a "princess." Without showing any sexual acts involving minors on-screen, the movie still occasionally evokes vintage Todd Solondz in its power to make our skin crawl.

But there's nothing sensationalist about the film's treatment of unpleasant themes. Leblanc shows a strong and clear-eyed understanding of how sexual predators achieve their aims. Her treatment of Magalie, meanwhile, is empathetic, anchored by Bierre's stunningly physical performance.

Magalie's dialogue is sparse. But to watch her slump in her seat at school, every fiber of her being expressing the desire to be elsewhere, is to be plunged back into the worst moments of our own teen years. She seems free and happy only at dance team practice, and when the teacher "excuses" her from jumping because of her pregnancy, her disappointment is viscerally evident.

The phrase les nôtres (as in "one of our own") has potent implications in today's world, evoking racism, nativism and every kind of "us versus them" thinking. Those forces work with grim inevitability in this story: When the angelic blond turns up pregnant, the seemingly enlightened townspeople turn on a dime and decide that the boy they call "Mexican" (we're not told if this is his actual background) must be the one who despoiled her innocence.

The film is less effective, however, when it comes to depicting those townspeople and conveying the sense of a whole community roiling from the scandal. With the exception of Magalie's mother, the mayor and his wife (Judith Baribeau), everybody is a bit player, and even the central characters are fleshed out with only a few key details.

While the performances are uniformly excellent, Les Nôtres doesn't reveal a whole lot about what binds this community. Its strength lies in vignettes: A scene in which the mayor's wife tries to seduce her husband after a party, for instance, is all too telling about their relationship. But other details that might help us understand their household situation remain obscure.

Les Nôtres is neither a mystery with a solution nor a tale of good triumphing over evil. It forces us to contemplate abuse and injustice while withholding any customary form of resolution. Despite its title, the movie is most successful as a character study, giving Magalie her due as both a victim and a survivor. With the whole town seeing her as a "problem," it's up to her to take care of herself. And by the end, Leblanc suggests obliquely, she has done so — though that means turning her back on les nôtres and finding a more accepting tribe of her own.

Eighth Grade (2018; Kanopy, Showtime, Sling, fuboTV, rentable): Online communication plays a key role in Magalie's story. Bo Burnham (Inside) also chronicled the hope and pain of being a 13-year-old girl who is extremely online in his directorial debut.

The Fits (2015; Showtime, AMC+, Sling, fuboTV, rentable): Les Nôtres suggests what an important outlet dance can be for young girls. Anna Rose Holmer's indie drama explores the inner world of a Cincinnati girls' dance troupe whose members experience mysterious seizures, developing a fascinating allegory for the throes of growing up.

Mommy (2015; Kanopy, rentable): If you want to sample more of the recent cinema of our northern neighbors, try wunderkind director Xavier Dolan, whose debut premiered at the Cannes Film Festival when he was just 20. This movie about a turbulent mother-son relationship won Cannes' Jury Prize.