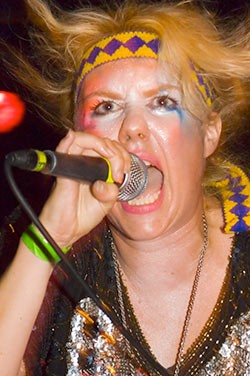 As the early crowd fizzled at Nectar’s last Saturday and piano chanteuse Nicole Burke packed up her gear, little Missy Bly toyed with a sequencer. Strapped beneath an oversized guitar and celebrating the CD release of MB3, the diminutive Burlington muse was giddy. “I’m going to start the show!” she announced to the pulse of staccato electric beats. Bly’s familiar voice spun quick and flirty singles such as the saccharine “Cherries and Ginger” while digital loops framed her light, lyrical style. Much of the singer’s solo set was tracked similarly.

But the joint got loud in a hurry once Creston Lea (guitar) and Bill Mullins (drums) plugged in. Distorted rockabilly filled the club, with Bly dropping poppy bass lines. The lovelorn lass (“River Phoenix just told me I’m ugly”) delivered Kay Hanley hooks wrapped in a Los Straitjackets boogie. And if the act was a little sloppy, well, that was part of its charm. In her high heels and big axe, Missy Bly was a punk-pop firecracker, just lighting our fuse.

I’d seen James Kochalka bouncing to Bly’s set, clad in a hot-pink tee. The 41-year-old is an iconoclast, not least because he’s apt to get down during opening acts. Kochalka also notably serves as Burlington’s resident cartoonist-at-large. But could this guy rock, I wondered?

Opening with silly Game Boy-raps, I grew doubtful. Guitarist Jason Cooley and bassist Colin Clary, still unstrapped, danced the Robot behind their fearless leader as he sang, “I can do anything, ’cuz my name is James Kochalka!” Thankfully, K quickly ditched the “Sesame Street” antics for a five-piece throwdown. Superstar (which, again, featured MVP Creston Lea) was fresh in every sense: imaginative and challenging, even hip. From the geeky wordplay of “Bacharach-alactica!” to the screamo “Blog War,” with its Black Sabbath trudge, there wasn’t a spared moment.

Kochalka flamboyantly kicked his way around stage, while the band — especially Clary — blasted each song with brio. Ever jocular, they shouted, “I curl up! You curl up! I curl up RIGHT NEXT TO YOU!” as if “Little Baby Kitten” were a Ramones anthem.

Kochalka is undoubtedly an acquired taste, but the guy vamps like Iggy Pop and sells his art masterfully. Even the raucous “Wash Your Ass” had us smiling. But as much as Bly and Kochalka had entertained, the crowd was primed for a jailbreak.

Double-stuffed and rowdy, its disco ball sparkling, Nectar’s thumped to house beats as a kimono-clad, mustachioed man (dancer Joe Shepard) stood ready behind his Korg. Heloise Williams strutted like a diva to center stage, awash in purple tights and a plush pink tail. The former Burlingtonian-turned-Brooklynite seemed ready to romp.

Before you could say “Goldfrapp,” Jason Diamond’s echo-laden bass groove slammed through the room. Leaning heavily on their new album Trash, Rats, and Microphones, The Savoir Faire rocked a rendition of “Illusions” that stood hairs on end with its scratchy guitar and table-shaking beats — I timed it at 120 BPM. Williams — once of viperHouse fame — owned the mike, conjuring a vocal marriage between Debbie Harry and the Scissor Sisters.

With the racy “On Fuego,” Shepard shed his kimono for a gold leotard, spiraling into pirouettes while Luke Hughett drummed tirelessly in the background. Flanking Williams was husband James Bellizia, whose edgy guitar fueled this funk machine and kept fans moving briskly into the wee hours.

Exhausted, I watched as Heloise and her tribe departed. But new faces, The Jazz Guys — clearly energized — had climbed onstage. Good God, there’s more? Even my whiskey waitress was heading home.

The JGs — technically The Vanderpolls, tonight The MaxFranks, thanks to an inside joke played by a certain local music editor from a certain local alt-weekly in last week’s edition . . . ahem — seemed mildly amused. “Let’s play a little rock ’n’ roll,” quipped Herb Van der Poll. Talk about your misnomers. There wasn’t a jazz standard within 100 yards of these guys, as the group swung a wicked three-guitar attack.

Schwartz was particularly fun to watch, as he wailed his way through tracks like a punk king. Equal parts Beach Boys and Kinks, the VPs set three-man harmonies against a wall of chainsaw guitars. Unfortunately, the sound mix — maxed out during the Savoir rave — remained wincingly loud, muddling much of the set. Addictive tracks disappeared beneath ear-splitting audio, jeopardizing an otherwise solid outing. Check out 2007’s So Moped Purée for a cleaner listen.

In one of the night’s final surprises, Herb — who’d snapped a string — began rewiring his rig, while the band played lazily around him. By the time he was restrung, the soupy instrumental had heated from an aimless jam into a boiling stew of psychedelic rock. Improvisational and unexpected, it was as close to jazz as the onetime Jazz Guys would get, and proved a fitting finale to this end-of-summer blockbuster.