Sas Stewart on How to Plan Your Own Vermont 'Adventure Dinner'

Guests at Sas Stewart's Adventure Dinners don't know where they're going until 24 hours ahead of time, when she texts everyone the secret location.

Over the last several years, they have found themselves at a marina boarding a boat for a fire-cooked feast on a private island, navigating their way through a 1,000-hemlock maze to an elegant Japanese-inspired meal and wandering through pastoral fields to raise a glass in the company of adorable goats.

The "speakeasy cocktail dinners" were originally an offshoot of the now-defunct craft distillery Stonecutter Spirits, which Stewart cofounded in Middlebury in 2015. Back then, it was unusual to pair a coursed dinner with cocktails, Stewart said.

The dinners have always involved close collaboration with local chefs, farms, florists and other producers to bring Stewart's kaleidoscopically creative gatherings to life.

"We wanted to create a beautiful experience for people," she continued, "bringing them to unexpected locations in Vermont and sharing a richer tapestry of makers and producers than they might expect."

"We wanted to create a beautiful experience for people, bringing them to unexpected locations in Vermont." Sas Stewart tweet this

Stewart's sixth season of dinner events has gone a little differently than she planned. (Hello, 2020!)

In June at Philo Ridge Farm in Charlotte, the farm's chefs created a Swedish-style midsommar solstice dinner paired with Stewart's cocktails featuring fresh flowers, local fruit and housemade aquavit. Flower crowns were grown and woven by the Vermont Flower Collective. The to-go dinner's components were stylishly displayed for pickup in front of an aquamarine Land Cruiser. Guests also received a link to a professionally compiled playlist.

The pandemic has pushed Stewart to experiment and innovate approaches to hosting and providing social connection in a safe way. At right, the expert dinner party host shares some tips for how you can do the same.

This year's Adventure Dinner themes have included "things we didn't get to do" as a society due to the pandemic, Stewart explained with a laugh. That has meant meals inspired by the Tokyo Olympics, lemonade stands (and Beyoncé's album of the same name) and, forthcoming, state fairs.

The dinners have always been held outdoors, but this year they have involved a mix of much smaller, socially distanced in-person events and to-go feasts with staggered pickup times, written dinner guides, customized playlists and optional virtual socializing.

Although few of us are looking for more Zoom meetings in our lives at this point, Stewart has found that most guests do dial in. "Connection is what people are looking for," she said.

How to Host Your Own Adventure Dinner

Adventure Dinners are always outdoors, which public health professionals consider the safest setting for COVID-19-era gatherings. For her in-person dinners this year, Stewart has kept groups small and seating areas well spaced. She also sends a health questionnaire beforehand and does temperature checks when guests arrive. When hosting a private dinner, it's a good idea to keep your invite list small, plan for an outdoor event and make sure everyone is on the same page regarding safety. As Stewart said, "Mask up until butts down, and always social distance." 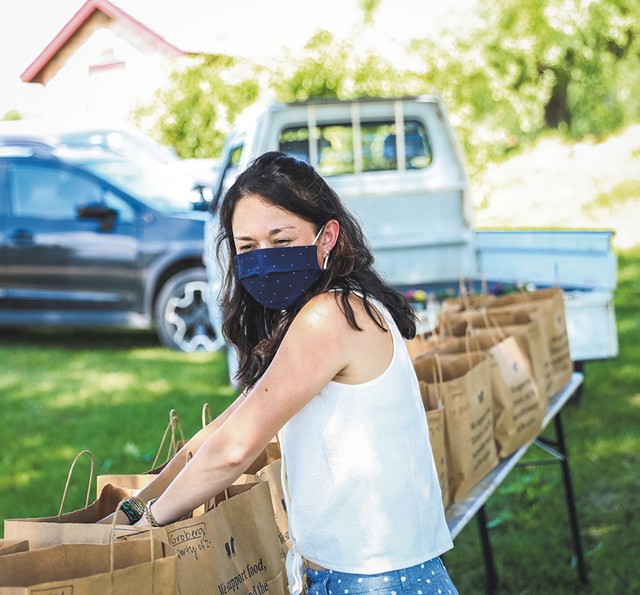 Aside from this year's "things we didn't get to do" themes, Adventure Dinners often draw inspiration from seasonal markers such as solstice or Halloween. Sometimes the location drives the theme, Stewart said: "Think an alpine meal for the mountains, or a fish fry for a lake setting." Weave the theme throughout the entire event, beyond food and drink. A recent beach-themed dinner, for example, used colorful standup paddleboards as tables.

Part of the fun of Adventure Dinner is the surprise of not knowing the location until 24 hours in advance. The menu is also kept under wraps until the event. Stewart suggests keeping that surprise in the mix by divvying up event elements among party guests. After a theme is set, perhaps one guest or couple secures the location while others take on a menu course plus paired beverage, or pull together table settings, flowers and music. Each can keep their contributions secret until the great unveiling.

Experiment with new ingredients, cocktails and ways of cooking, urges Stewart. While traditional wisdom may be to stick with what you know when entertaining guests, she says, "Ditch the old standbys and do something you've never done before. It's an adventure, after all!" One of the most interesting challenges, Stewart says, is coming up with nonalcoholic versions of the paired cocktails (which she always offers) that complement the same flavors.

Adventure Dinners keep everything as local as possible by collaborating with Vermont farmers, beverage makers and other entrepreneurs. Stewart always has her antennae up for new and interesting businesses as she travels around the state. This year, especially, many farms have set up new farmstands, and flower growers have lost event customers and could use support. Ask friends for recommendations, or just stop by that roadside farmstand and see what it offers.