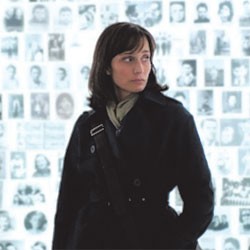 Imagine a movie about the horrors of the Third Reich made for the Lifetime Channel, and you may begin to have a sense of what we’re dealing with here. Sentimental, improbable, artistically bankrupt and relentlessly self-serious, Sarah’s Key is quite possibly the first Holocaust chick flick.

Directed by Gilles Paquet-Brenner and based on a novel by Tatiana de Rosnay, the film zigzags between two stories, one that begins in 1942 and another set more or less in the present. Kristin Scott Thomas sleepwalks through the role of Julia, an American journalist who’s lived in Paris for 20 years. She’s in her forties, married to a Frenchman (Frédéric Pierrot), about to move into an apartment owned by his family and, to the couple’s astonishment, pregnant.

The last two facts take on additional significance when Julia’s editor asks her to write a magazine piece on a little-known chapter in France’s history: the Vel’ d’Hiv roundup, in which 13,000 Jews were arrested and prepared for transport to death camps by French police.

As Julia does research for the article, the director flashes back to 1942 and tells the story of the Roundup through the eyes of a 10-year-old named Sarah (Mélusine Mayance). When officers appear at her family’s door one day, she senses the threat they represent, hides her younger brother in a secret closet, tells him not to make a sound and promises to come back for him soon.

What she doesn’t sense is how long your average visit to a concentration camp is likely to last. Tragedy is piled on tragedy in the early part of Sarah’s story, and this brief portion of the picture is nightmarishly gripping. Unfortunately, Paquet-Brenner can’t get back to Julia and her comparatively trivial tale fast enough.

From the safe remove of the present, Scott Thomas’ character contemplates atrocities of the past, but these aren’t the most pressing problems on her plate. After witnessing the inhumanity experienced by Sarah and her family, we’re actually expected to give equal weight to the unraveling of Julia’s marriage. She wants to keep the baby. Her husband doesn’t. Also, he spends more time at the office than she’d prefer.

The most dubious development is yet to come: Out of all the apartments in all the arrondissements in the whole French capital, the one Julia and her workaholic, non-baby-wanting mate are about to move into turns out to be — wait for it — the very same one from which the young Jewish girl was removed more than half a century earlier. Please.

The film’s central conceit, though, is the key to its undoing. I’m sorry. It’s not just silly, but in borderline bad taste to suggest these two stories belong in the same movie. You simply don’t attempt to make a modern-day journey of self-discovery appear more noble or meaningful than it is by interweaving scenes from the Holocaust. It’s a cheap stunt.

Not that the clunky plotting, wooden acting and overly ponderous dialogue wouldn’t have limited the picture’s engagement. “We’re all a part of history,” Scott Thomas is forced to pronounce at one point, along with something about “the memory of who we were, the hope of what we can become” and, finally, my personal favorite: “When a story is told, it is not forgotten.”