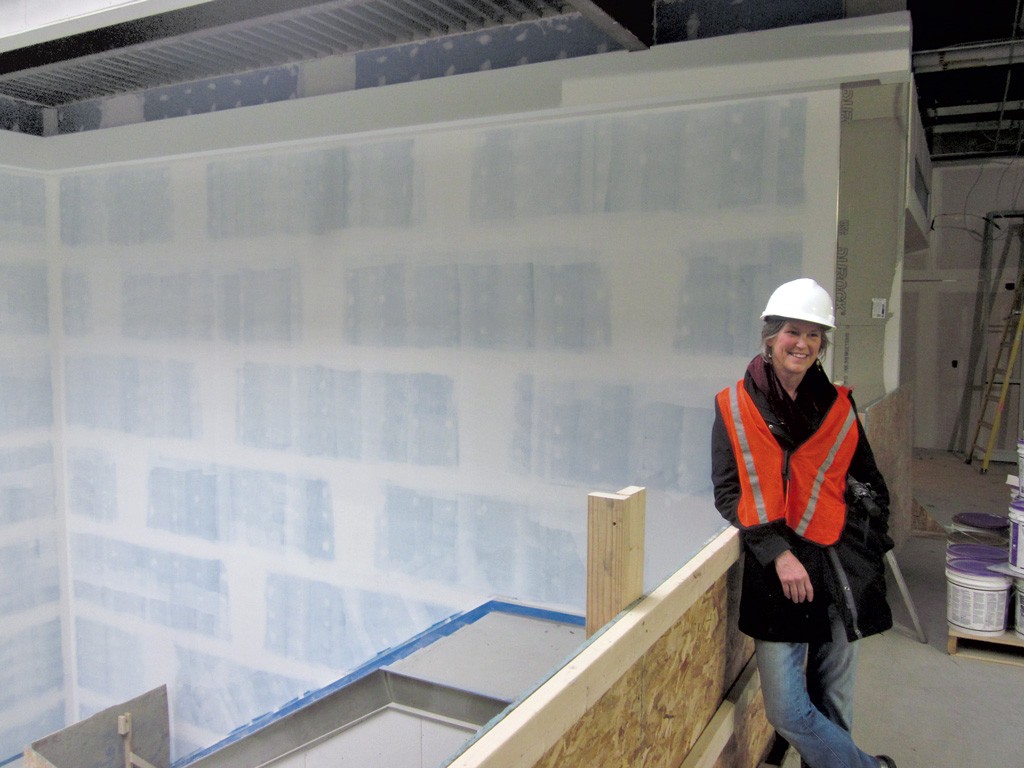 If you've ever seen the whimsically painted Fletcher Free Library van zipping around Burlington, or tiptoed over the floor murals at NRG Systems in Hinesburg, you're already familiar with the work of Waterbury artist Sarah-Lee Terrat. The prolific artist's résumé is as expansive as the surfaces she paints on.

Primarily known for her lively public works, Terrat recently turned her brush to a project requiring a touch more gravitas. With a $50,000 grant from the Vermont Arts Council, she is creating a mural for the atrium of the new Waterbury State Office Complex. The project makes use of the former Vermont State Hospital, formerly known as the Vermont State Asylum for the Insane.

When Tropical Storm Irene ripped through Vermont in August 2011, it damaged large portions of the psychiatric facility; the 122-year-old hospital was forced to close and the remaining patients were relocated. At the time, the institution that once housed more than 1,000 patients was down to 54 beds, and the majority of the space had been converted to offices for roughly 1,500 government employees.

In March 2012, Gov. Peter Shumlin announced a plan to bring 900 employees from the Agency of Human Services and the Department of Public Safety back to Waterbury. The core historic buildings are being preserved and a new addition is under construction. The complex is set to open in January 2016.

Terrat responded to a request for proposals for the atrium site from the arts council in the spring of 2013. According to senior program director Michele Bailey, the council wanted to "create a positive and welcoming environment, connect to themes related to [historic] use of the building, and emphasize common spirit and cooperation."

Terrat had to convince the council that she could convey that message. "I knew that I wanted something about the history of the community, the hospital and their relationship," Terrat recalled during an interview in her Waterbury studio. So she dove right in with a trip to the Vermont State Archives in Middlesex.

There she found a small book of poetry by a woman named Jean Killary, who had been a state hospital patient during the 1940s and '50s. "There was one poem called 'Green and Gold,' and I just immediately fell in love with it," Terrat said. "I didn't know what I wanted to do with it, but that's what I wanted to work with." The poem is a tiny thing: two stanzas that describe the melding of goldfinch wings with the "antique" gold of birch leaves. 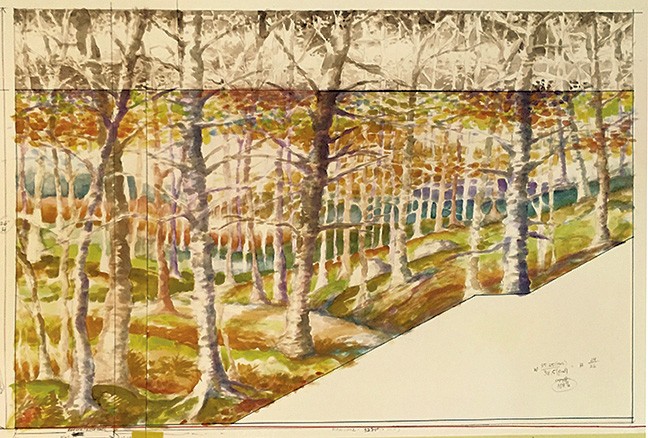 Killary died in 1993, so Terrat had to get permission to use the poem from a living relative. "It was this or nothing," she recalled. "Nothing else had inspired me." A month before she was due to present her proposal to the VAC, Terrat received the go-ahead from Killary's nephew.

Finally, she was able to share her vision: a collage of historic documents from the hospital overlaid by a transparent mural of a birch forest, inspired by the poem. The day after her presentation to the arts council, Terrat was notified that she had been selected for the grant, along with Gordon Auchincloss, who is creating an outdoor sculpture.

"The committee was really interested in [Terrat's] proposal," said Bailey. "They wanted to honor the past but use this opportunity to look forward positively, so this was a really nice blending of the two."

The concept is appealing, but choosing which parts of the hospital's complex history to focus on presented its own challenges. Like other state asylums nationwide, the Vermont State Hospital had a checkered past. In the beginning of the 20th century, asylums subjected patients to deplorable living conditions and often-torturous experimental treatments. "We weren't alone in doing this stuff," Terrat said. They were "just trying to figure out other ways of treating mental patients."

As the public learned more about the condition of these institutions, the tides shifted. The process of deinstitutionalization began in the latter half of the century, facilitated in part by the introduction of antipsychotic medications. The focus turned from shutting away psychiatric patients to rehabilitating them and moving them back into the community.

Terrat's project was a balancing act. "I didn't want this to be too Walt Disney ... but I didn't want it to be too dark," she said. "[It's] about honoring the humanity, the creativity and the heart of patients, their caregivers and their community. These were human beings, often having remarkable talents and inspiring things to share."

Photographs of nurses and patients, handwritten pages from daily logbooks, rule lists and more will peek through the leaves of Terrat's birch forest. In one photo, patient Merrill Bennett, whom Terrat calls "the Train Man," peers out from under a cap, holding a kitten to his chest. "He did these beautiful drawings and paintings of trains," Terrat explained. At one point, Bennett attempted to escape the hospital, derail a train, set fire to a barn and kill himself. "He had these incredible talents," Terrat commented, "but he also had this ... stuff."

One of the more disturbing pages in the asylum's history was written by Dr. Eugene A. Stanley, who served as superintendent from 1918 to 1936. He advocated for the use of eugenics, or the improvement of the human race by selective breeding. That movement included the sexual sterilization of patients to "prevent the procreation of children with an inherited tendency to crime, feeble-mindedness, epilepsy, idiocy, imbecility or insanity," Stanley wrote in a document included in the collage.

But Terrat didn't want the darker aspects of the hospital's history to take center stage. "[Some of] the older people in Waterbury can remember the time when they were kind of embarrassed about their town," she said, "but they also took care of the relationship with the hospital." On a mockup of the collage, Terrat pointed out a photograph of a booth at a fair. "Here's one called 'Fun Fest' that's the village doing this [carnival] for the patients," she explained.

Forty-five historic documents will be repeated throughout the 50-by-28-foot mural. "I wanted to make sure that there are several places where people can get up close and read the [writing]," Terrat said. "And some of the faces are just big and staring out at you. Each photograph opens up a story."

Since the mural is so large, Terrat is creating composite images with Photoshop that will be printed on long rolls of wallpaper and transferred onto the surface in August. As for the painting, "I'll be on site for six to eight weeks, August and September," she said.

Terrat will use high-quality latex acrylic house paints and a glazing medium to make the colors transparent, giving the mural a watercolor effect. Killary's poem, interpreted visually as the forest, will be the first thing people see when they approach the wall.

"Jean Killary was a patient, an anonymous person in the hospital. I don't know how many years she was there, but she was a creative individual with, obviously from her poetry, a lot of soul and a connection to the natural environment," Terrat said. "I'd like to look at [the mural] as honoring the positive side of somebody who was marginalized by society and kind of put away. And I think — I know — that there were a lot of people who were."

"Green and Gold" will be etched in Vermont granite underneath the mural, moving out from the shadows of an archival box and into the light of history.