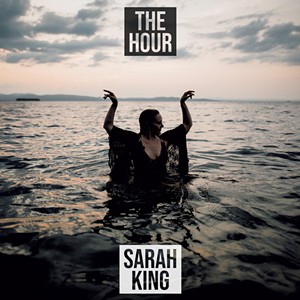 When it comes to playing music, Sarah King is a lifer. The gritty Americana singer, songwriter and musician moved from Maine to the Deep South to pursue her career. She became an active livestreamer when the pandemic decimated live music events. In her bio, she even cites her commitment to music as a factor in the dissolution of a key relationship.

Now based in Ripton, King keeps on trucking with her debut solo EP, The Hour, to be released on March 19. Those familiar with King's 2019 blues-rock LP What Happened Last Night, made with her old band the Guilty Henchmen, will recognize her bold feminist voice and dark storytelling. Characters both sinister and spurned commit sinful deeds in these five new songs — but not without reason. On the single "Not Worth the Whisky," for example, King reminds a misbehaving man that she "can only be good for so long."

In the piano-driven album opener, "Poison," King reinforces a sentiment expressed by women musicians ranging from the Chicks to Lil Debbie. To paraphrase, "I'm not crazy, and fuck you for using a misogynistic trope to excuse your own bad behavior." King identified fellow badass U.S. Rep. Alexandria Ocasio-Cortez (D-N.Y.) as inspiration for the song in an Instagram post on International Women's Day.

The alt-country murder ballad "Nightstand" is sung from the viewpoint of a woman born with the devil inside: "There's a darkness a-reaching for my hand / I keep a gun in my nightstand / Waiting for music to bury a body by."

Driving percussion, spooky background vocals and crunchy electric guitar — including a standout solo by Steve Milbourne — make for a tense atmosphere on "Nightstand." It feels as though something scary could jump out from around a corner at any moment.

With just her voice and acoustic guitar, King creates an immersive mood on a cover of "War Pigs." The reverb on her stripped-down recording of the Black Sabbath anti-war anthem gives the impression that she's alone in a cavern or large room. The song's video deepens the sense of isolation as black-and-white shots of King sitting solitary in a field punctuate Vietnam War footage. It hits even harder knowing that her first husband, a soldier, died of suicide as the result of PTSD.

For this EP, King collaborated with producers David Baron and Simone Felice of the Felice Brothers, who has also worked with the Lumineers and Bat for Lashes. Fortunately, even with new producers and tweaks to her sound, King's storytelling, signature themes and strong point of view are intact for the long haul.

The Hour is available at sarahkingsings.com. Catch King's virtual album-release show on Friday, March 19, at 8 p.m. on her YouTube channel.