Sarah King and the Guilty Henchmen, 'What Happened Last Night' 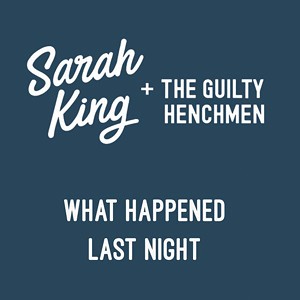 Sarah King is relatively new to the Vermont music scene, but the Addison-based singer-songwriter is far from some fresh-faced neophyte. Originally from Maine, King left New England more than a decade ago to pursue her musical career in the Deep South. From the sound of her new record, What Happened Last Night, she picked up plenty of Southern blues along the way.

The title track, for example, tells the story of a femme fatale who uses her looks to seduce and rob suckers at a bar, all over a driving, blues-rock groove. "You should have known better than to let a pretty girl near your glass," King admonishes. (Somewhere, Cardi B is nodding vociferously.) It has the feel of a Gregg Allman solo cut, something that might have popped up on a Michelob commercial in the late '80s. While it's a perfectly fine song, King doesn't offer much that's new in what could be described as a genre homage.

She shines a little brighter on the following track, "Madman's Doll." King has a powerful voice, capable of warm, smooth tones, as well as gravelly blues howls. She sings with the confidence of a woman who knows she can belt out a tune. Here she rides a soulful melody over the arrangement, which culminates in a shuffling chorus in which she pleads with a lover, "Please don't drag me down."

King cut the 11-song album in four days with her old band at Spinnaker Studio in Columbus, Ga., before mastering it with Ryan Cohen at Robot Dog Studio in Williston. What Happened Last Night is a crisp, present-sounding record, which is a nice change for the genre. Especially in blues-rock, there's something irritating about records produced to sound like the music that inspired them. It's like the musical equivalent of pre-ripped jeans. Refreshingly, the focus here is squarely on highlighting King's vocal prowess.

"Restored" is a high point, a beautiful, reflective piano ballad that King delivers with emotive intent. She then takes a turn toward country rock on "Oh Mama" before the band show off some funk chops on "The Gun."

Though she and the Guilty Henchmen are largely a blues-rock outfit, they display a strong ability to dive into other pools when the mood is right. "Wedding Rings," like the title track, feels a bit like paint-by-numbers, but by the time the record closes with an excellent version of the traditional tune "Columbus Stockade Blues," all is forgiven. Over a swaying, shimmering grove, King sings the slow burner of a man missing his baby while languishing in prison, and she sings it with equal parts loss and authority.

What Happened Last Night is an excellent introduction of King to the Vermont scene. The album is available at sarahkingsings.com. Catch her live on Friday, December 6, at the Red Clover Ale in Brandon.