At GreenTARA Space in North Hero, a dollhouse-size procession of floats, each towed by a toylike tractor, lines a long shelf. The floats are fragile, made from paper stretched on reeds, with plastic bottle caps or wooden discs for wheels. They form a miniature imaginative world that draws viewers in, and then disturbs with its references.

Called "Katrina Caravan," the installation is Middlebury artist Sarah Ashe's response to 2005's Hurricane Katrina and the subsequent flooding of New Orleans, where she lived for 10 years. Ashe's horror at the plight of poor residents stranded in the Mercedes-Benz Superdome is expressed in a circular structure partly open at the top to reveal inside a jumble of tiny plastic babies, most painted to represent Black people. A float bearing a paper boat with paddles represents rescue efforts. More floats carrying paper shotgun homes or tiny bundles made from used tea bags reference the life-saving housing and supplies that were so slow to arrive.

The work "expresses the rage I felt toward the frivolity of privilege," Ashe, 78, writes in her artist statement. "Katrina Caravan" is part of her current solo exhibit, "Migrations," at GreenTARA Space — paintings and sculpture "about the challenges and experiences of millions of people: migrants, asylum seekers and refugees all searching for a better life."

"Caravan" was a departure for the mixed-media artist and painter when she created it in 2006. Ashe had been making paper-and-reed lamps since she took a Noguchi Akari lamp-making workshop in Rosedale, N.Y., in 2002. Beautiful objets d'art whose unique shapes evoke seedpods and stones, her lamps are available at Frog Hollow Vermont Craft Gallery in Burlington, Edgewater Gallery in Middlebury and Gallery in the Woods in Brattleboro.

"I have to feel emotionally engaged when I paint." Sarah Ashe tweet this

The caravan, however, was her first foray into making art that reflected her emotions. It spurred her to create paintings and sculpture addressing the "plight of people who don't have a home," said the tall, mild-mannered artist. She has been concerned about such human suffering since her youth and became even more aware of displaced people's experiences while working in the Peace Corps and traveling.

"Now, with climate change and all the walls and anti-immigrant stuff in the U.S., I just fell into it. The pictures [in the media] just grabbed me," Ashe said.

Ashe grew up a Quaker in Philadelphia. Her parents were both teachers, but she knew she didn't want to teach. Instead, she pursued art, earning a bachelor's degree in ceramics and sculpture at Bennington College. Upon graduating in 1964, she joined the Peace Corps, influenced by her Quaker background — "that do-gooding part that was inculcated into me" — and because she wanted to see more of the world and "liked working with people," she recalled. Ashe served three years in Ecuador.

When she returned to civilian life, she put her people skills to work as a human resources director in Boston, a position she held for many years. In that role, and long before the #MeToo and Black Lives Matter movements, she helped one corporation build a more diverse workforce, simply because, she said, "That was important to me."

In Boston, Ashe pursued her art on the side, and eventually a generous boss gave her a weekly day off for the purpose. But it wasn't until she and her husband moved to New Orleans, where she worked as an HR consultant, that she devoted significant time to her art.

When Katrina hit, Ashe was in Middlebury for the summer, where she and her husband owned a house that they rented out during the school year. (Their New Orleans home had minimal tree damage and lay a block from any flooding.) Ashe immediately reconnected with the Peace Corps to secure a "return volunteer" position in the flooded city. Within two weeks, she was helping people navigate government protocols to obtain money and housing. She volunteered there for a month.

"It was hard to hear people's stories," Ashe recalled. "It was mostly the poor — and mostly Black people — who were in such terrible situations."

Ashe saw similarly endangered people in her travels to Palestine and other countries, and she keeps abreast of news about boatloads of refugees off the coast of Libya and massive refugee camps in Jordan and Sudan.

The motif of a mounded form representing a refugee tent is repeated throughout the paintings in "Migrations"; sometimes groups of them take up whole swaths of the canvas or clay board. One set of paintings appears on torn strips of canvas, representing tattered tent material; Ashe dotted the trailing threads with tiny dabs of paint to evoke an overhead view of long lines of refugees. Other works show fine scratches in the paint, a reference to the razor wire that typically encircles camps. 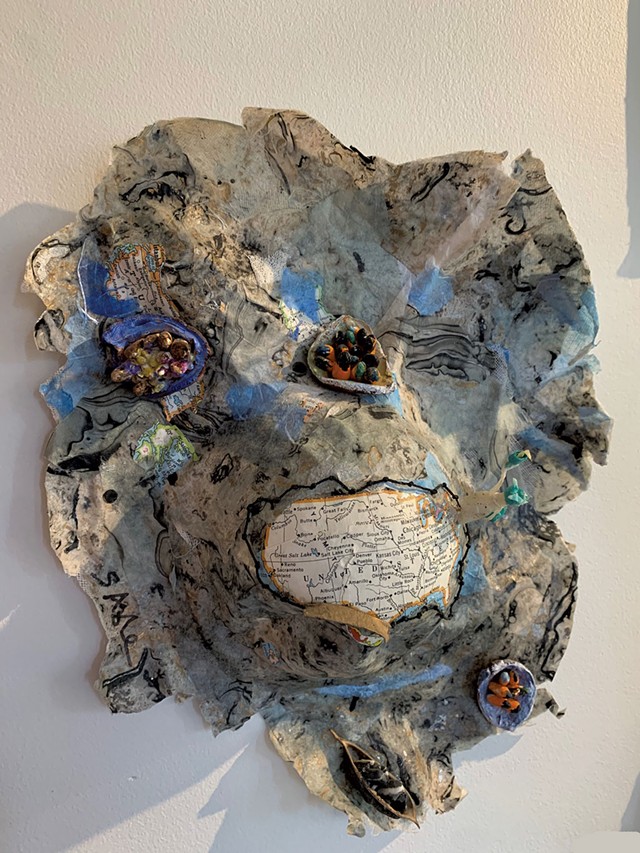 Surprisingly, her paintings use a cheerful palette of pinkish oranges and deep blues.

"I love color," explained Ashe, whose orange enamel earrings supported her statement. "A lot of places I'm describing don't have color; they're very desert-y. [But] if color draws you in, and you discover what the art is about, then that's good."

The small sculptures use materials from the natural world that Ashe delights in saving and repurposing: garlic stems with their "hair" intact, bits of dried Queen Anne's lace, the paper tags on tea bags, the pods from false indigo plants. In "No Refuge," a wall sculpture that looks like a spread-out paper globe with the U.S. outlined prominently on a central bulge, a boat made from a walnut shell and packed with tiny pods seems to circle, futilely, the isolated country's coastline.

Though Ashe's lamps are popular items, she has no illusions about the salability of her works on migration. "I paint [and make] them for myself," she said. Her objective lies elsewhere: "I want to make a difference in some simple way. If it makes people think about the plight of refugees, that would be wonderful."