In Flushing: Make Room for Someone Else, a new work by Putney's Sandglass Theater in collaboration with Parris-Bailey Arts of Tennessee, two actors and four puppets explore themes of art, memory, legacy and family history.

The double autobiographical piece, which premieres on Thursday, September 15, at Puppets in the Green Mountains, was conceived and written by Sandglass' Eric Bass and Linda Parris-Bailey, who also perform in it. Flushing's four puppets, endearing and evocative creations made by Bass' wife, Ines Zeller Bass, play the parents of the actors.

The actors speak to and for their parents as the show moves back and forth in time and across generations. The performers also look to the future, poised at a personal and professional precipice. That juncture — at once uncertain and essential — is represented by yellow caution tape on the stage floor. On it is printed the word "brink."

The brink in Flushing corresponds to a real-life turning point for the show's creators. Parris-Bailey, 69, has stepped aside to make way for new leadership at the Carpetbag Theatre in Knoxville, Tenn., where she was the longtime artistic director. Bass, 75, who cofounded Sandglass Theater with Ines 40 years ago in Munich, Germany, is preparing for his own transition.

The Basses settled in Putney in 1986 and made the southern Vermont town the home base of their company. The couple live in an apartment above the puppet theater and workshop, which are housed in a converted barn. For the past three years, Eric and the couple's youngest daughter, Shoshana, have worked as co-artistic directors of Sandglass. He'll leave that position at the end of the year, when Shoshana, 35, will become sole artistic director of a company that's five years older than she is.

"The transition is really about relationships more than anything," Shoshana told Seven Days. "The technicalities of running a nonprofit are meaningless without the relationships that [my parents] have passed on and that I've built through my whole life."

The Sandglass transition occurs as numerous theater and dance companies founded in the 1970s and '80s confront a similar situation, Eric said. As they near the ends of their careers, founders and directors are considering whether and how to pass on their companies and what that will mean for the ensemble. In the process, theater makers find themselves considering their artistic legacy.

As the Basses have talked about the transition for the past half dozen years, Sandglass has been "in good company," Eric said.

"It feels good to be part of a [larger] conversation," he said. "We're informing and supporting each other. And each company has to do it in its own way."

For Sandglass, he added, "I'm absolutely thrilled to see Shoshana take over this company."

In a telephone call with Seven Days and Shoshana, Eric talked about the challenges of running a not-for-profit arts company, including fundraising and managing logistics. 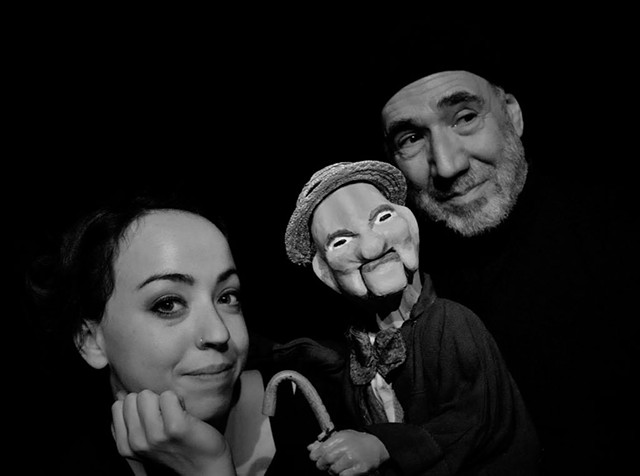 Shoshana, the youngest of three sisters, was born a year after the family moved to Putney. She grew up partially on the road, accompanying her parents on international tours.

Shoshana moved to Boulder, Colo., to attend Naropa University, where her work focused on peace studies, performing arts and the intersection of the two. Still, she attributes much of her artistic education and inspiration to her parents' influence.

"My parents have informed my work tremendously in terms of puppet theater," she said. "Not just in terms of constructing puppets and the material we work with but also how we create."

Sandglass artists build puppets to represent the specific characters of each work. They form the heads from neoprene and build bodies of wood and fabric. In performance, the puppets are often placed on a table or other surface and animated by the actors who appear with them.

In Flushing, the puppets that play Eric's parents — Sid and Debby Bass — are paired with props constructed by Ines. The objects speak to their life's work: a piano for Sid, who was a songwriter, and a typewriter for Debby, who worked in public relations.

Flushing reflects on what parents pass on to the next generation, from junk to family stories. In one of the original songs in the play, Eric and Parris-Bailey sing: "I don't want to leave you with my load ... I'd like to leave you a pathway to your dreams."

The act of transition is also a bit of an act of flushing. Eric Bass tweet this

For her part, Shoshana is touring with an original piece, her own exploration of artistic legacy, called When I Put on Your Glove. In an exception to Sandglass' method of building new puppets for each show, she performs with four puppets created by Eric for his award-winning solo work Autumn Portraits.

When Eric handed Shoshana his puppets — art objects that are older than she is — he did so on one condition: that she use them to make her own piece.

"They've been slightly adjusted to fit my hands," Shoshana said. She added a new puppet to the ensemble to create When I Put on Your Glove.

Shoshana said she feels blessed that, as she becomes Sandglass' sole artistic director, her parents are alive and will remain involved in the work.

"A lot of the stories you hear about children taking on their parents' work, it's often after their parents are deceased," she said. "We have this incredible gift: They're still here. They're still part of my processes. They come into the rehearsal rooms and help me with building [a piece]. There's a lot of love and support and mentorship that isn't disappearing."

The title Flushing refers to a neighborhood in Queens, the New York City borough where Parris-Bailey and Eric grew up. But it's also about what's lost or disappears when one generation gives way to the next.

Flushing: Make Room for Someone Else, produced by Sandglass Theater: Thursday and Friday, September 15 and 16, 8 p.m., at New England Youth Theatre in Brattleboro. $16-18. sandglasstheater.org