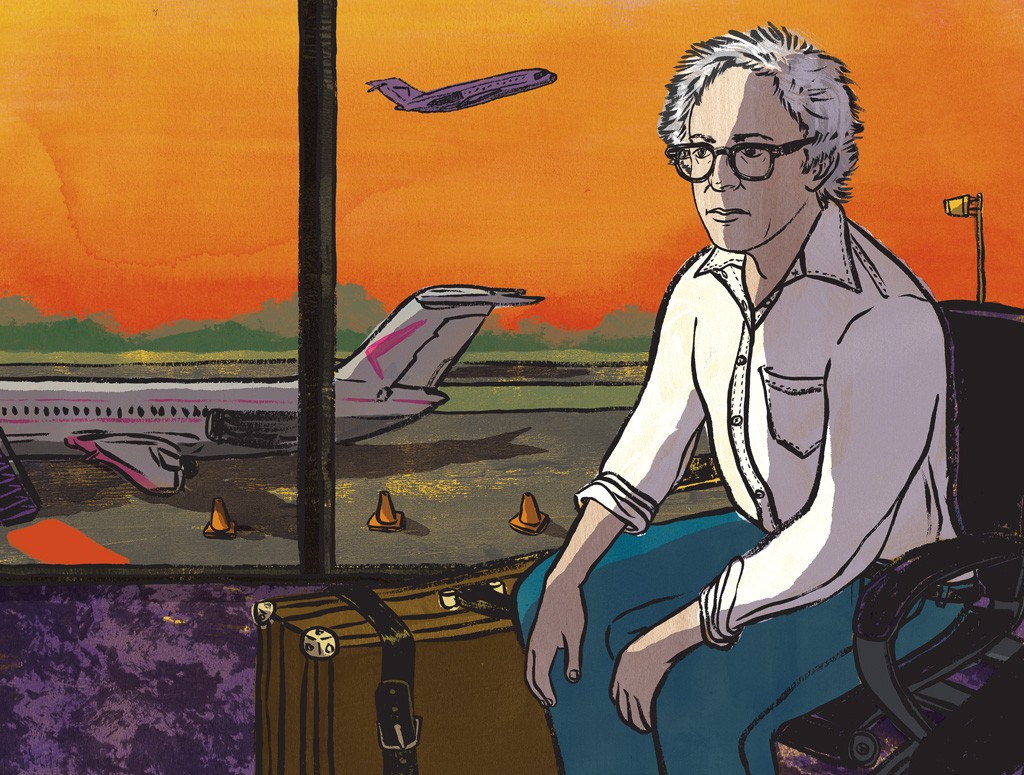 That he was mayor of Burlington, Vermont, didn't stop Bernie Sanders from accepting an invitation to visit Nicaragua in July 1985. Sanders arrived at Managua's Carlos Fonseca Plaza in a car provided by his hosts — the Sandinista National Liberation Front — as thousands of Nicaraguans trudged to an anniversary celebration of the political revolution that ended nearly a half century of dictatorship.

Sanders joined other dignitaries — many from the Eastern Block countries in Europe and communist outposts such as Cuba, Laos and Vietnam — in special seats near the podium where Nicaraguan President Daniel Ortega spoke. Burlington's socialist mayor was the sole government official from the United States at the rally, according to Don Melvin, a Burlington Free Press reporter who covered the mayor's weeklong visit. Roughly 300 U.S. Sandinista sympathizers attended the event.

"I will never forget that in the front row of the huge crowd were dozens of amputees in wheelchairs — young soldiers, many of them in their teens, who had lost their legs in a war foisted on them and financed by the U.S. government," Sanders would later write in his book, Outsider in the House.

Sanders had earned his invitation to the celebration because he was a loud critic of President Ronald Reagan's Central American policies. Burlington in the 1980s was a hotbed of opposition to the administration's efforts to undermine the Sandinista government by financing Contra fighters, based in nearby Honduras. Reagan claimed the Sandinistas were communists and terrorists.

At a news conference that he and European socialists held in Managua the day of the celebration, Sanders repeated his criticism: "The real issue is a very simple one. Does the government of the United States of America have the unilateral right to destroy the government of Nicaragua because the president of the United States and some members of Congress disagree with the Sandinistas?"

During his visit, largely financed by the Sandinista government — Sanders paid his airfare — Sanders met with President Ortega and other officials. He sat down with the editor of an opposition newspaper, who complained of government censorship. And he walked through Managua's slums, occasionally asking residents about the impact of the 1979 revolution on their lives.

When he returned to Burlington, a group of reporters came to the airport to meet Sanders, who summed up his impressions. "These are people who suffered for 45 years under a terrible dictatorship," he said, "and they're fighting back, and they're trying to build a society where people can live decently." He spoke of "intelligent" Sandinista leaders who had been tortured by the previous regime, and of efforts to build hospitals and schools.

In an undated statement in his archived mayoral papers, Sanders justified his trip. "My major concern is that I believe that there is a very real possibility that the United States is about to enter a Vietnam-type war in Central America," it read. Having been granted a 75-minute meeting with the Nicaraguan president during his trip, Sanders said, he came away believing Ortega was willing to enter into talks with the U.S. to avoid war.

"God only knows what role I, the mayor of a small city, can play in this process," Sanders said, but he promised to write Reagan and Ortega to urge them to meet.

Sanders' trip was last minute. The commander of the revolution and organizer of the commemoration, Carlos Nuñez, sent the invitation in mid-June for the July 19 event. Nuñez said it was in recognition of Sanders' "priceless solidarity and tireless labor on behalf of freedom and self-determination for the Nicaraguan people."

Sanders had been speaking out against the Reagan administration's policies in Central America for much of his time as mayor and had reached out to the Nicaraguan government to link Burlington with a sister city there.

Sanders "often referred to the idea that a small city like Burlington — and a small state like Vermont — could, and should, lead by example in opposition to policies in Washington that were immoral and interventionist," recalled Jim Schumacher, former campaign manager and congressional staffer for Sanders.

"So, for many of us, it was a point of pride that Bernie was openly placing Burlington in opposition to Ronald Reagan's foreign policy by going to Nicaragua and openly embracing the leaders of what many of us at the time saw as a true people's revolution," Schumacher wrote in a recent email.

One of the people who felt that way in 1985 was a young Ben Truman. He recounted recently how a Sanders aide approached him about going to Nicaragua to help establish Burlington's sister city relationship with Puerto Cabezas, a city of 14,000. The Burlington Board of Aldermen had approved the affiliation in 1984, and Sanders had been communicating with his counterpart in Puerto Cabezas. Truman jumped at the chance, he said, because he saw the sister-city program as a way to counter Reagan's flawed policy.

Truman recalled a June 1985 encounter on the streets of Managua with a boy who noticed his Vermont T-shirt. Truman and the boy peeled off their shirts and swapped. That, Truman said, was the first cultural exchange during his mission to start building people-to-people connections between Burlington and Nicaragua.

Truman still has the boy's white shirt. He held it up during an interview and offered a rough translation of the words printed on the front and back: "Follow me, I'm moving ahead," and "My vote is for the FSLN." Those letters stand for Sandinista National Liberation Front in Spanish.

Truman never got to Puerto Cabezos because of fighting in the region — Sandinistas versus the Contras. But a few weeks later, Sanders toured the struggling Caribbean port city, where homes were constructed on stilts to protect against flooding.

Sanders' archived mayoral files, now in Special Collections at the University of Vermont Bailey/Howe Library, show he wrote to Reagan numerous times objecting to his foreign policy. In an October 1983 letter, he explained why a mayor cared about military and CIA spending in Central America: "At a time when your administration has imposed horrendous cutbacks to the American people in such areas as housing, aid to education, environmental protection and health care, I am appalled that you are using taxpayers' money to destroy the government of a small nation."

Sanders sent copies to the state's congressional delegation. Their responses suggest he wasn't completely out of step with Vermont's leading politicians. Sen. Patrick Leahy (D-Vt.) noted he had long opposed "Reagan's support for the insurgents seeking to overthrow the Sandinista government in Nicaragua." Congressman Jim Jeffords (R-Vt.) wrote that he'd support an amendment to cut off funding for "covert activities against Nicaragua."

The Reagan administration also replied to Sanders. Jayne Plank, director for intergovernmental affairs, argued Nicaragua had played a destructive role by supporting guerillas in four of its neighboring countries. She noted, too, that it had accepted $200 million in military aid from the Soviet Union and hosted 2,000 military advisers from Cuba. She cited examples of repression by the Sandinistas — mob attacks on Catholics and forcible relocation of Miskito Indians.

Sanders' trip had its critics who said Sanders shouldn't challenge U.S. foreign policy and hobnob with communists but rather focus on his job and keep his nose out of foreign affairs.

WVNY-TV aired a blistering editorial, telling Sanders to get back to work on the city's problems, such as school funding and crime. The station also objected to Sanders' support of the Sandinistas, declaring, "We believe it is time you recognize the evil that lies behind the Marxist government you praise so vociferously."

Peter Welch, then a Democratic state senator and now Vermont's sole congressman, rebuked the Burlington Free Press for criticizing Sanders. "The suggestion that there is a dereliction of duty when a locally elected official concerns himself with national issues disregards the important link between local and national events," Welch wrote in a letter to the editor. He said Sanders' trip would help draw public attention to a "reckless policy."

Sanders' papers contain a handful of letters about the trip, mostly supportive. A Benedictine monk at Weston Priory called the visit "a bold and courageous gesture that made us happy."

Some writers noted that Sanders went to Nicaragua despite warnings that it could hurt him politically — but it hasn't, at least not yet.

"Bernie was very good about making sure the city ran well — taking excellent care of the nuts and bolts of city government, like plowing streets, taking care of the parks, funding the police and fire departments, etc.," explained Schumacher, Sanders' former aide. "I think that insulated him from the criticism that he shouldn't be speaking out on foreign policy."

Now, as Sanders takes the national stage as a presidential candidate, his praise for Ortega and willingness to stand with communist dignitaries to celebrate a revolution could become a political liability — or at least the stuff of negative ads. (So could his "honeymoon" trip to Yaroslavl in the Soviet Union to finalize another sister-city relationship in 1988.)

"In the Democratic presidential primary, I would not think so," Schumacher predicted. "Many Democratic voters would see it as a positive that Bernie was open in his opposition to Reagan's Central American foreign policy, back when it was not so popular to do so.

"That said," Schumacher added, "I am sure that if Bernie is on the ballot as the Democratic candidate in November, Republicans will try to red-bait him."

Truman, who today works in communications at the Vermont Department of Health, didn't think the Nicaragua trip would become a political liability because Sanders was simply saying, "I am standing with the people." And, he pointed out, that same message is resonating with voters today.