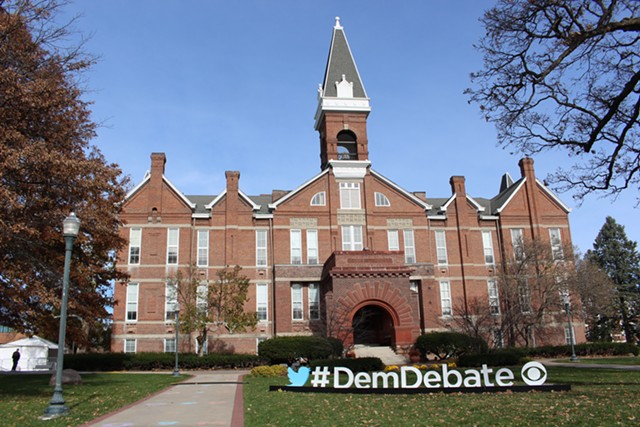 A couple of hours before he flew from Burlington to Iowa last Friday, Tad Devine outlined a simple strategy for his boss, Sen. Bernie Sanders (I-Vt.), to win the second Democratic presidential debate.

"If we can get people focused on income and wealth inequality in America," Sanders' senior adviser said, "his chances of connecting with people and winning go up."

But by the time Devine, Sanders and the rest of the candidate's entourage touched down at Des Moines International Airport at 4:30 p.m. central, the presidential campaign had shifted beneath them. More than 4,000 miles away, a band of terrorists had detonated explosives outside of a Parisian soccer stadium, opened fire on several restaurants and ambushed people at a packed concert hall.

Within minutes of landing, Sanders spokesman Michael Briggs, who was traveling with the candidate, issued a statement expressing horror at "the cowardly attacks against innocent civilians in Paris."

Across the Des Moines River, the CBS News team charged with producing the debate had been rehearsing the next night's encounter when it learned of the Paris assault. Moderator John Dickerson had planned to focus the forum on economic inequality — the heart and soul of Sanders' message — but he and his colleagues quickly shifted gears.

Terrorism and foreign policy had suddenly inserted itself into a campaign that, until that moment, had revolved principally around domestic concerns.

"This attack changes everything, right?" Schmidt said, arguing that former secretary of state Hillary Clinton had the international expertise Iowans would seek in a president. "This is one of those forks in the road that you suddenly reach in politics, and you have to go down that road."

Outside Drake University's Sheslow Auditorium, where the debate would take place, the mood on the West Des Moines campus was glum. Iowa Democratic Party chair Andy McGuire said that, although she was usually a "very excited person," she was overcome that day by the "terrible tragedy."

"This was really an attack against democracy, and this is democracy that we're talking about tonight," she said.

A few miles north of campus, a handful of Sanders staffers and volunteers labored away at the campaign's Iowa headquarters — an unassuming storefront in a suburban strip mall, surrounded by a Hy-Vee supermarket, an H&R Block office and a Vietnamese restaurant. Inside, amid the cheap office furniture and campaign paraphernalia were several fresh signs featuring the iconic image of the Eiffel Tower inside a peace symbol.

Few of those in the parking lot seemed aware that they were yards away from the nucleus of Sanders' Iowa effort. Some weren't even aware of Sanders himself.

Sean Peters, a 57-year-old truck driver from Des Moines, was an exception. As he carried a container of Purina Tidy Cats kitty litter to his car, Peters said that he had been trying to decide between caucusing for Sanders or Clinton.

"Bernie makes a lot of sense, but I don't think he's really up on foreign policy," he said, adding that his own priorities had shifted since the Paris attacks the day before. "We're too weak. The country's just gone like Jell-o. I'd like to see a hard-liner."

Later that afternoon, Jonathan Tasini voiced a different perspective. The liberal writer and labor activist, who recently published a compilation of Sanders speeches, was preparing to speak at a pre-debate rally for the candidate in the parking lot of a Des Moines bank. He said that it was Clinton, not Sanders, whose foreign policy judgment should be questioned, given her 2003 vote for the use of force in Iraq, which Sanders opposed.

"The people who voted for the Iraq War should give serious thought to their responsibility for the fracturing of that region, which gave rise to ISIS and gave rise to a horrible situation in the region," Tasini said. "Bernie predicted this, generally speaking. He saw, like in a crystal ball, the horrific loss of life."

As the sun set over Des Moines, Tasini and the philosopher Cornel West addressed an enthusiastic gathering of Sanders supporters from the bed of a white pickup truck adorned with campaign signs. Iowa State director Robert Becker asked for a moment of silence to honor those killed in Paris and other recent terrorist attacks.

"In tonight's debate, there's going to be a lot of discussion about how we move forward in this world, because a lot has changed in the last couple of days," Becker said.

Inside the debate hall two blocks away, Sanders, Clinton and former Maryland governor Martin O'Malley observed their own moment of silence — and then Sanders delivered his opening statement.

"Let me concur with you and with all Americans who are shocked and disgusted by what we saw in Paris yesterday," he said. "Together, leading the world, this country will rid our planet of this barbarous organization called ISIS."

Then, just 18 seconds into his remarks, Sanders pivoted awkwardly to his trademark denunciations of a "rigged economy" and a "corrupt campaign finance system." His call for a "political revolution," typically a crowd-pleaser, suddenly sounded a tad tone deaf.

Clinton drove home the contrast in her own opening statement, focusing entirely on Paris and ISIS and not so subtly suggesting that the presidential campaign was "about choosing our next commander in chief."

But for those expecting a rout, it did not come. Dickerson quickly put Clinton on the defensive, forcing her to explain President Barack Obama's Syrian and Libyan policies, which have come under fire since she helped shape them.

Sanders, meanwhile, found his footing and tied the region's instability to what he called the "disastrous invasion of Iraq, something that I strongly opposed." When Dickerson asked if he was "making a direct link" between Clinton's Iraq War vote and the rise of ISIS, Sanders did not flinch.

"I don't think any sensible person would disagree that the invasion of Iraq led to the massive level of instability we are seeing right now," he said.

When the subject shifted to domestic affairs — and, specifically, how each of the candidates would pay for their generous proposals — Sanders was ready to defuse the delicate matter of his democratic socialism. Asked how high he'd raise taxes on the nation's highest earners, he said he hadn't "come up with an exact number yet."

"But it will not be as high as the number under Dwight D. Eisenhower, which was 90 percent," Sanders said, drawing a laugh from Clinton. "I'm not that much of a socialist compared to Eisenhower."

Sanders' strongest moment came when Dickerson asked Clinton about the "millions of dollars in contributions and speaking fees" she'd received from Wall Street banks. When she called her plan to tighten regulations on the financial industry "very aggressive," Dickerson set Sanders up for a swing.

"Not! Good! Enough!" the Vermonter said, channeling his inner Larry David. "Why do they make millions of dollars of campaign contributions? They expect to get something. Everybody knows that."

Then Clinton responded with the most memorable line of the night.

"I represented New York on 9/11 when we were attacked," she said. "Where were we attacked? We were attacked in downtown Manhattan where Wall Street is. I did spend a whole lot of time and effort helping them rebuild. That was good for New York. It was good for the economy. And it was a way to rebuke the terrorists who had attacked our country."

Planned or spontaneous, the line was instantly eviscerated on social media and, soon thereafter, gobbled up by the cable news shark tank.

By the end of the debate, Sanders had proven his liberal bona fides on raising the minimum wage and providing universal health care; O'Malley had demonstrated his commitment to immigration reform and gun control; and, in case you missed it, Clinton reminded the world that she'd had a hand in killing Osama bin Laden.

In other words, nothing really changed. To many in the punditocracy, that meant a win for Clinton. As the clear front-runner, all she needed was to not lose, they said. Of course, these were the same people who had predicted Clinton would blow Sanders out of the water in a foreign policy forum. Which she didn't.

In a crowded spin room after the debate, Devine circled back to what he'd said the day before: If Sanders could only convince voters to focus on economic inequality, he had a fighting chance against Clinton.

"He wanted to make sure that people understood not only the sense that he felt yesterday about Paris," Devine told reporters huddled around him on the second floor of Cartwright Hall. "But he also wanted people to understand that the message of his campaign centers on rebuilding the middle class of America."

That's all well and good if the nation's attention again drifts away from Syria, as it has countless times before in the four years since the country erupted into violence. But if the front pages are still covered with stories of ISIS attacks and retaliatory strikes when Iowans trudge to the caucuses on February 1, Sanders will have to do more to show that he can take on terrorists — not just Wall Street.

The original print version of this article was headlined "Family First"