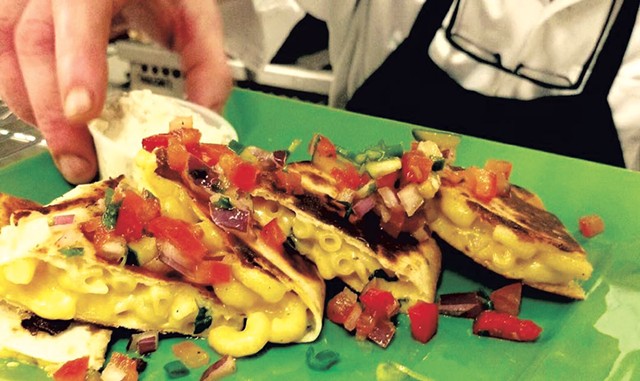 It's not often that the sleepy Connecticut River burg of Fairlee — year-round population 977 — witnesses the opening of two new restaurants in five days. In fact, last week was one for the history books.

Early in the week, locals got their first taste of the Lunchbox Deli & Café, a three-table daytime spot at 192 Route 5. On Monday, Amber Sharon and Shawn Nelson began serving simple home-style fare such as biscuits and gravy, breakfast quiche, pastries, and sandwiches from their cozy storefront. Priced at $4 to $6, Lunchbox panini include Cubans and Reubens. Deli cuts, saucy meatballs or bacon, lettuce and tomato can be layered into bulkie or sub rolls and paired with daily-changing soups.

Next door at 176 Route 5, chef-owners Kelden Smith and John Hessler opened their 37-seat Samurai Soul Food on Friday night. The pair met while working in the kitchen at Worthy Burger, where Hessler ran kitchen and PR cleanup after a five-case E. coli outbreak dealt the restaurant a massive credibility blow in 2015.

Hessler developed the idea of a mac-and-cheese quesadilla, served with pico de gallo and green onion dip as a family meal, while working as a sous chef at Worthy Kitchen. His fried-perch tacos are a throwback to his youth in the Champlain Valley. "I grew up in Burlington," he says, "and perch tacos — that's a thing [there]."

Smith and Hessler agree that customers respond best when excitement and love emanate from the kitchen. "A lot of restaurants base their menus around offering food to the lowest common denominator," Hessler says. "We can have fun cooking that kind of stuff, but we have a blast cooking when we do our own stuff."

Rather than pandering to what they think diners would like, they say, they built the restaurant around their own tastes. "On my days off, I eat fried chicken and Chinese food," Hessler says. "So we started with that."

Once a pending liquor license goes through (the restaurant operates as BYOB for now), Samurai will offer cheap canned beers, white wines, sparkling rosé, sake, and sake cocktails made with housemade lemonade and fruit punch. Four tap lines will roll through a something-for-everyone list, including one regular offering from nearby River Roost Brewery in White River Junction.

Taking advantage of relationships developed at Worthy Burger — where the pair juggled deliveries from 35 farms — Samurai's owners source beef from Robie Farm, located just across the river in Piermont, N.H. Pork travels from Chelsea's Vermont Heritage Farm. "These are our friends," Hessler says. He's keeping his hiring decisions hyper-local, too, he notes, in hopes of providing at least one constant in the town's highly seasonal labor market. "Fairlee is a really cool town," he says.

Hessler hopes that the locavore ethic, along with the restaurant's relaxed vibe and affordable prices ($3 to $8 for small plates and sides; $10 to $14 for entrées), will help him get locals to try something new. "There are a few restaurants around here," he says, "and they're not bad options. But there aren't a lot of them."

The original print version of this article was headlined "If It's Not Fun, Why Do It?"