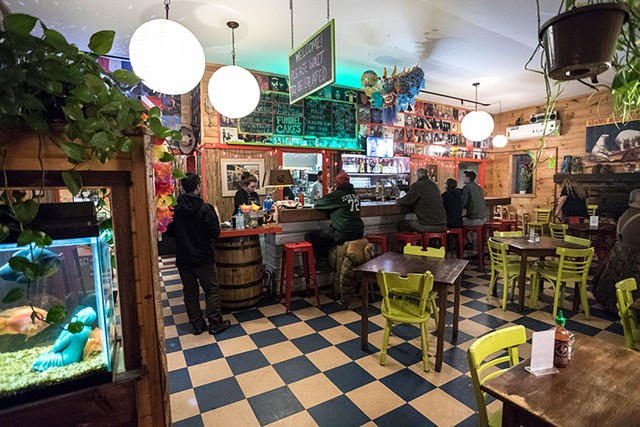 Visitors to super-rural Fairlee will find an unusual welcoming committee at Samurai Soul Food: a blond mannequin with a belted restaurant T-shirt barely covering her plastic lady parts — and a fat black cat named Richard, who purrs and slinks figure-eights around her ankles.

In a quiet Upper Valley backwater where the median age is nearly 50, Smith's oddball brand of Asian-fusion stoner food is an unlikely draw. But the restaurant has consistently packed in diners of all ages since opening on January 20, 2017, just hours after Donald Trump's inauguration.

Draft beers hail from breweries such as White River Junction's River Roost, Burlington's Zero Gravity and Tunbridge's Upper Pass. There's no hard liquor, but you can get sparkling wine spritzers or a Dark and Stormy that replaces black rum with vanilla stout.

When the weather warms, a tiki-themed beer garden doubles the restaurant's seating. That's critical, since Fairlee's population swells each summer with camp counselors and second-home owners who stay on the shores of lakes Morey and Fairlee.

Even with the extra space, lines snake out the door nightly. A cynic might credit the restaurant's success to the fact that it's the only bar in town.

But ask a local, and they'll give it to you straight: Samurai Soul Food is a sure shot for a fun time.