Sampling the Chef-Made Foods to Go at Gilfeather's 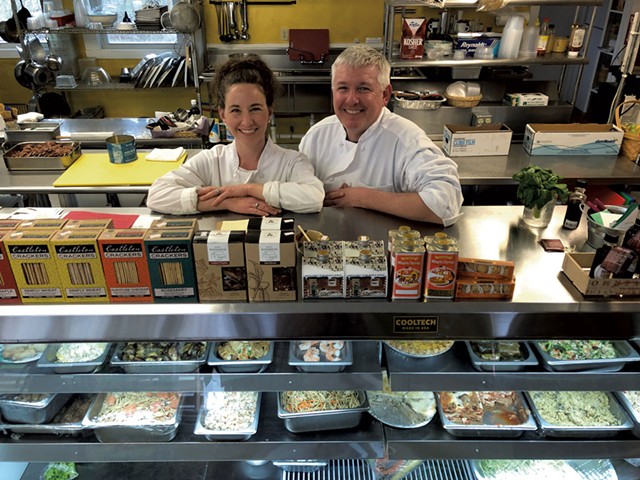 When I'm driving a stretch of highway and see a place with a hand-painted sign saying "Lobster rolls," I stop. If there are also signs that say "Pork BBQ today" and "Craft beer & wine," it might warrant a skidding, 90-degree stuntman turn. Or perhaps an illegal U-turn if I'm feeling wimpy.

Having recently moved to Ferrisburgh, I've been exploring the array of culinary delights in my new town. As I traversed Route 7, one spot immediately caught my eye. The elegantly designed sign read "Gilfeather's: Great Food to Go." Below it, more hand-painted signs promised "VT cheeses" and "Fresh pies + cupcakes." What is this place?

"My philosophy is, the [name] on the business doesn't really bring people in, necessarily," said Rick Benson, who, with his wife, Nancy, runs the entire operation at Gilfeather's Fine Provisions. "The signs out front ... that's what stops people."

If you're wondering, the name comes from the Vermont state vegetable, the Gilfeather turnip, which was designated shortly before Gilfeather's opened almost two years ago.

"It's funny, because people come in and think I'm Mr. Gilfeather," Benson noted.

The dark red building with a green metal roof is adorned only with a large ice freezer and benches on either side of the door. Walking in, I expected the provisions would be merely OK, the air heavy from years of fried food. I expected townies and having to step over a sleepy old dog.

What I didn't anticipate? White chef coats on the store owners. The smell of fresh pie. Shelves of wine (I counted 70 different bottles) and coolers of Vermont craft beer and cider. Fancy crackers, cheeses and local eggs. All this plus a case filled with fresh-prepared appetizers and entrées — from lamb chops to maple-Dijon chicken salad — made it clear this is not your typical roadside offering. 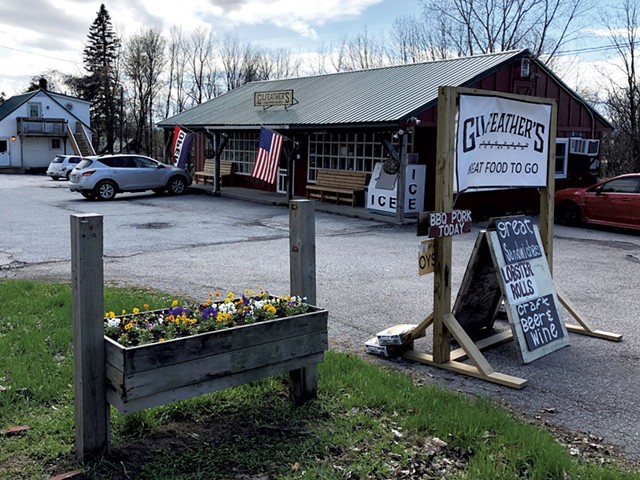 "It's a novelty to people, somewhat," Benson said. "It's not often you can stop at a roadside place and get white chef coats and somebody with a fine-dining background that can produce this kind of food."

Considering Benson's culinary background, Gilfeather's offerings are less surprising. An informally trained cook, Benson said cream puffs were the first thing he ever made on his own, following a recipe in one of his mom's cookbooks. He was 10. A New Hampshire native, Benson began cooking in Vermont in the late '80s, at the renowned Inn at Sawmill Farm in West Dover. In 1991 he opened his own spot, the Manchester Square Grille, a sidewalk café.

He opened the Noodle Room in Londonderry in 1996 and operated both spots until early 2002, followed by a year cooking at the Crazy Mountain Ranch in Montana. While Nancy studied nursing at the University of Vermont, Rick worked at Let's Pretend Catering and the Net Result, a South Burlington to-go food shop.

On New Year's Eve 2004, Benson opened the fine dining restaurant Taste on Burlington's Lake Street (now home to Foam Brewers). Like several waterfront eateries before it, Taste eventually closed its doors. When that endeavor ended, in 2008, Benson opened the Little Garden Market on Ferry Road in Charlotte with the same takeout model he now uses at Gilfeather's.

The Bensons still own the Little Garden Market and supply it with food made at the Ferrisburgh store; they also provide full catering services, either on-site or with special orders for pickup at the store. A lengthy list of possible appetizers is on the website.

The first time the Gilfeather's signs reeled me in, I had to get the lobster roll ($12.99). It was overflowing with fresh, crunchy veggies and chunks of lobster I could discern from across the room. And because no one in their right mind dismisses homemade maple-vanilla-buttercream cupcakes ($2.50), I got a couple of those, too. They were fluffy and flavorful and had just the right amount of frosting. 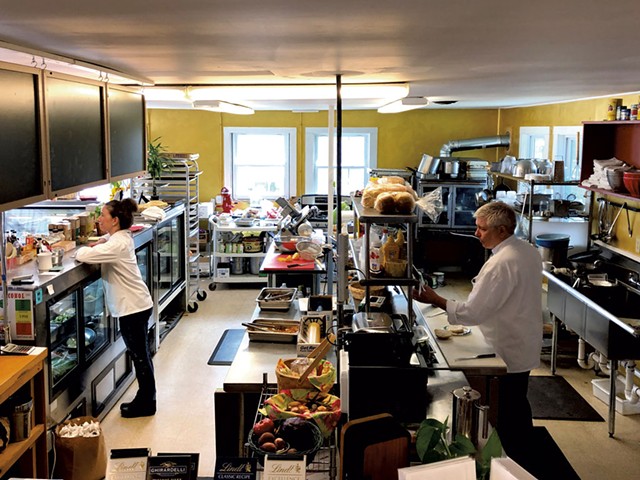 I made up my mind to return for a meal I could share with my wife. When I did some days later, my first choice was a sandwich that seemed too strange and sounded too good not to try: the spicy blueberry bacon grilled cheese on maple-walnut bread ($7.99), made with wild Maine blueberry jam, Sriracha, Muenster cheese, thick-cut bacon and spinach.

"People look at it and go, 'That is the weirdest thing; I don't know if I should try it,'" Benson said. "I'll say, 'Get one, take a bite and, if you don't want it, I'll buy it back and make you something else ... And I've never had somebody give one back."

He was right. The sweetness of the blueberry jam combined with the smoky, savory bacon, soft cheese and crunchy, buttery bread melded beautifully. The sandwich was a wonderland of bold yet complementary flavors, a theme I detected in each of Benson's creations.

I also got a Cubano sandwich ($7.50), a side of coleslaw ($3) and another lobster roll, because my wife would have sent me back if I hadn't. The Cubano was a winner — the crunchy, zesty pickles, the punch of yellow mustard and the sweet tang of the barbecue roasted pork distinguished themselves with each mouthful.

Even the coleslaw was delightfully out of the ordinary: The crunchy cabbage was cut into chunks of varying sizes, and its sauce was creamy and subtly sweet with a tingly horseradish bite.

Perhaps best of all was dessert: first, Nancy Benson's apple pie ($3). I can't remember ever having a better one. Loaded with thinly sliced apples, the filling was gooey with a zing of cinnamon, and the crust was soft yet flaky.

"I don't even like pie, but I like this pie," my wife said through a mouthful of crust. "That lady knows how to make pie."

Yes, she does. Nancy said she sometimes makes 30 to 40 pies in a day, all while tending orders and making sandwiches at the store.

She also knows how to make baklava ($3.75), which I purchased as well. We ate it in silent worship, save for the occasional murmur of gratification.

What tied everything in our meal together was the apparent mindfulness of each dish: Every flavor, every ingredient was purposeful.

Rick Benson noted that in summer they get greens and tomatoes from a nearby farm, and the store carries numerous Vermont food products such as Blake Hill Preserves and Sidehill Farm jams. He gets seafood delivered six days a week.

The Bensons said they had coveted this location — which they can see from their house — for years when it was the Ferrisburgh Bake Shop & Deli. 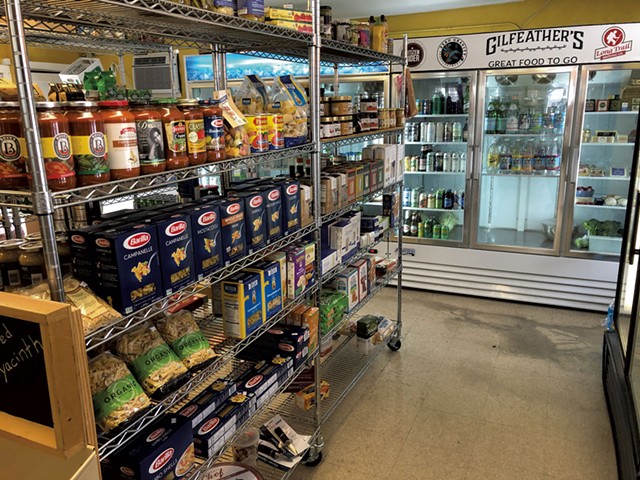 "During the busiest times of year, there's almost 40,000 cars a day that go by here," Benson said. "There are three curb cuts, so it's easy to get in and out of. If you see the place and you go, Oh, I should stop there, there's another place to turn in."

Both Bensons said working together and working for themselves are what they love most about Gilfeather's. Their loyal customers — many of whom they know by name — and the eclectic commuters and travelers on Route 7 also make it special.

"Everyone through the door is an opportunity to learn something," Benson said.

Before summer, the Bensons plan to expand the wine selection and get a bigger cooler to hold more Vermont beers. The takeout food will switch to more seasonal fare such as fresh oysters and fruit and pasta salads. Benson said they will expand their selection of specialty groceries, adding another Vermont-roasted coffee, mustards and chutneys, to name a few. Maybe they'll have to add more signs. Or maybe not.

"We have [a] sign out there that says, 'Great sandwiches.' People walk in [and say], 'I'm here for a great sandwich,'" Benson said. "Or, 'I saw lobster rolls; I had to turn around and come back.'"

I'm sure glad I did.