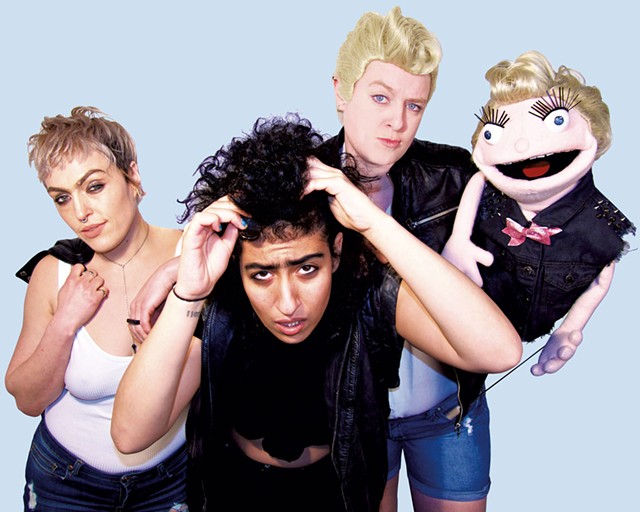 Montréal in the summer is a beautiful thing. The long parkas disappear and festivals flood the streets — some, like the upcoming Mural Festival, more visible than others. While it may be harder to spot from the bustling streets, the St-Ambroise Montréal Fringe Festival is still one of the region's best bets for experimental theater.

The original fringe festival was founded in Edinburgh in 1947 by a group of actors who opted to forgo the rigors of the jury process for the prestigious Edinburgh International Festival. Instead, they started their own event, taking over bars on the outskirts of the fest — the fringe.

Since then, fringe has grown to encompass all things weird, dirty, experimental or exquisite that might not make it to a traditional stage. Today, hundreds of such festivals take place in cities around the world. Each has its own standards and governing bodies, but most adhere to a common set of ideals. And most are still unjuried, albeit with some exceptions, such as FringeNYC.

This is the 28th iteration of the St-Ambroise Montréal Fringe Festival, which is directed by Amy Blackmore and is part of the Canadian Association of Fringe Festivals. From May 28 to June 17, it features more than 800 shows in a variety of venues, most situated on or around Boulevard Saint-Laurent.

There are many ways to enjoy Fringe, from the "After Dark" events to the Fringe Park, which English media director Guillaume Doussin calls "the hub of the festival." There are also the "A-Z" shows, referring to performers that applied and were selected for a venue by lottery. Roughly two-thirds of the shows are in English (the website indicates the language of each show).

I attended two shows on Friday, June 1, to get a taste. The first, Dance Side of the Moon, was choreographed by Helen Simard and performed by Maxine Segalowitz, with projections by Kim-Sanh Châu. It was staged on the third floor of a discreet St-Laurent building in the Espace Freestanding Room, a coworking space and venue for performance artists.

Billed as a reinterpretation of Pink Floyd's iconic concept album The Dark Side of the Moon, the Montréal show was entrancing and, well, uncomfortable. As the record played from a booth behind the chairs, Segalowitz threw herself against the wall, then on the floor.

Her alternately sensual and contorted movements spoke of pain, isolation and an entirely relatable insanity. During a piece titled "Money," her face became gargoyle-like, her movements staccato and sharp. Segalowitz screamed, embodying the sound through movement, then instantly transformed into a lithe, blissed-out seductress. As quickly as that new face came, it departed, and we were watching her writhe on the floor.

The next show on my schedule, Carmilla, opened a mere five minutes after Dance Side closed, three blocks down the street in the Wiggle Room. This decadent, speakeasy-style venue boasts red velvet and a decidedly vaudevillian vibe. I settled in with a perfectly mixed Vesper cocktail for the burlesque interpretation of Joseph Sheridan Le Fanu's 1871 gothic vampire novella.

Staged by Pointed Cap Playhouse, the show tells the story of a queer vampire who seduces the daughters of wealthy aristocrats and transforms them into seductive creatures of the night, complete with sassy new outfits full of lace and puckers adorned with lipstick.

The show's setting alternated between reality and a dream world in which Carmilla and protagonist/narrator Laura met, mostly to strip and shimmy endearingly. Waking moments were allotted to fathers trying to figure out what shenanigans their daughters were up to.

At the end of the show, Laura, played by Stella Saint, delivered the moral. Carmilla isn't about fear of the dark or of monsters, she said. "It's about the fear that lives in the heart of humankind. I chose to see past the fear."

Essentially the message was: Don't judge, love is love, and try not to be a dick.

Feminist and LGBTQ themes are strong in this Fringe. Another title that should definitely pique interest is Greasy: A Lesbian Love Story. The 105-minute production by Glam Gam Productions reframes the "family" film Grease, denouncing the idea that women should change themselves for men. Get your tickets in advance — this one has been selling out.

There's also Is That How Clowns Have Sex? A One-Woman, Queer Clown Sex-Ed Show by Fiona Ross of Maximaliste Productions. I bumped into the two-time Spirit of the Fringe award winner at Dance Side of the Moon, where she told me about her show. It sounded like the best fake sex-ed class you'll ever sit through.

Wondering how to navigate your own Fringe experience? Book your hotel or Airbnb in advance. You'll want to be close to St-Laurent. Most of the shows run on the later side, and, after running around all evening, you'll be thankful for a quick stumble home.

Be sure to eat poutine at Patati Patata (4177 Boulevard Saint-Laurent), even if it's hot out. Really. The greasy goodness will keep you going all night and help you absorb the strong, balanced cocktails at venues such as the Wiggle Room. The latter is also a must-stop: The service is top-notch, the drinks are classic, and the stage is magical.

If you're feeling overwhelmed by the breadth of the programming, ask for staff picks when you stop in to buy your tickets at the box office on St-Laurent. Or follow public relations coordinator Sarah G. LaForce on Twitter at @SarahGLaForce; she's been posting about her favorite shows. Tickets are also available online, and I'd advise purchasing a festival pass if you plan to see three or more shows.

If you miss the Fringe, don't fear — Montréal offers plenty of summer festivals. The Mural Festival shares St-Laurent with the Fringe from June 7 through 17, bringing internationally acclaimed street artists and performers to paint the town pretty much every color.

Then comes the Festival International de Jazz de Montréal, running from June 28 to July 7. Snarky Puppy, anyone? (Or, if you missed the Preservation Hall Jazz Band at the Burlington Discover Jazz Festival last weekend, here's another chance to see them.)

If electronic music is more your speed, there's the weekly Piknic Électronik, every Sunday through September 30. For circus arts, there's Montréal Complètement Cirque, July 5 to 15. And Montréal becomes "the funniest city in the world" during the Just for Laughs festival, July 11 to 29.

Whatever floats your boat — theater, murals, jazz, circus, comedy — North America's City of Light has it covered this summer.