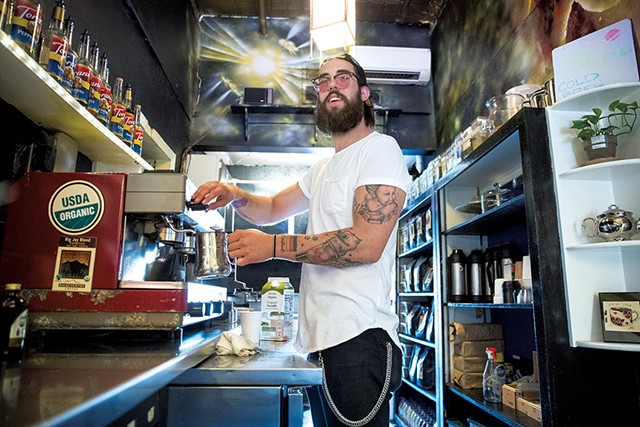 Burlington is a coffee lover's dream town, with a number of places to grab a cup to go or to sit down and sip. Java options run the gamut from corporate behemoths Starbucks and Dunkin' Donuts to super-chill cafés with plenty of laptop outlets and artisan shops that source the finest beans and brew them with finesse.

While coffee stops dot the city, recent new options have poured into downtown near College and Church streets. Right where they meet, you'll find the Leunig's Bistro & Café's Petit Bijou kiosk, which opened on New Year's weekend. A few steps up Church Street is the Cosmic Grind, formerly a Speeder & Earl's Coffee franchise, which went indie in April.

Just a block west on College is Tight Squeeze Coffee Shop, a tiny biz that opened at the end of 2014 and specializes in crowd-pleasing medium- and dark-roasted coffees. Onyx Tonics Specialty Coffee appeared right across the street in June 2016. It celebrates the bean by offering a rotating selection of single-origin coffees brewed with care by an award-winning coffee taster.

As with cheese or beer, we all have subjective tastes in our lattes. To help you decide which of these coffee shops might become your new favorite, we spent a highly caffeinated afternoon patronizing all four.

Tasting notes: The cookies are big and moist. I couldn't stop eating the duck-confit poutine with herbed gravy; the foie-gras-pâté sandwich with cherries and arugula was great, too.

Leunig's Bistro & Café is a Church Street institution, and when Bluebird Tavern stepped away from the kiosk across the street, the restaurant won the bid to take over its operation.

A natural stop for Marketplace shoppers to refuel, the spot has all the usual coffee drinks. The brewed coffee was big and bold with a hint of bitterness. The maple latte — a best seller, staff said — was delicate and not overly sweetened.

But it's in more nourishing fare that the kiosk shines, with heartier food offerings than the other cafés in this survey. The deftly made European-style sandwiches offer simple, high-quality fillings on baguettes. For purists, there's the classic ham and butter, but you can also get ham with Brie, poached pears and truffled aioli.

Then there's the poutine. On a recent visit, we encountered Long Island resident and chef Patty Sawyer, about to hop on a Greyhound bus home after eating her way through more than a dozen Burlington restaurants. Her last stop was Petit Bijou for a favorite dish: "I had [the poutine] a year ago, and I couldn't stop thinking about it," she said. "Nothing compares to Leunig's." 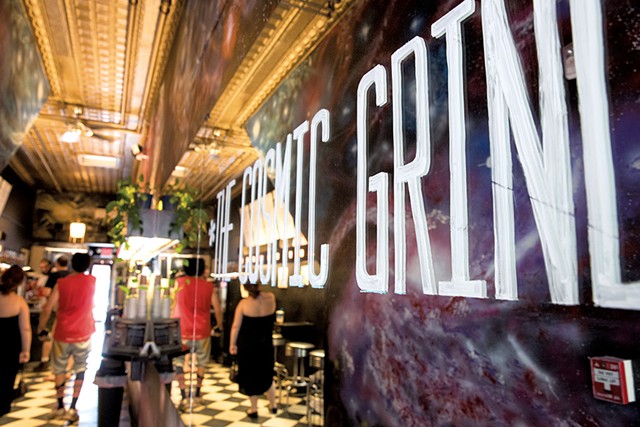 Come here for: loads of fancy mocha drinks, coffee by the pound

Snacks: Pastries from Mirabelles Café & Bakery and from Barrio Bakery

Tasting notes: The mochas are sizable and designed for those who like things sweet and decadent. The drip coffees are smooth and pleasant.

The Cosmic Grind has a shiny, gold tin ceiling and a celestial paint job on the walls. Its logo features a pup named Stanley, and sometimes the real, live Stanley can be found chilling out on the black-and-white tile floor.

The shop may be skinny, but its menu isn't: In addition to all the regular coffee concoctions, there are 21 specialty mocha drinks made with Ghirardelli chocolate. They're flavored with a variety of syrups, including cherry, coconut, hazelnut and maple.

The Cosmic Delight, made with orgeat (almond) and orange peel, is a holdover from the shop's near quarter century as a Speeder & Earl's. Those days ended in April after owner Doug Montgomery, who had owned the store since 1997, lost his license to use the Speeder's name.

According to Ian Senesac — the Grind's manager, who is in the process of purchasing the business from Montgomery — the change of direction turned out to be a boon. "It made sense to rebrand," he said. "We're a way better coffee shop now, in my personal opinion."

Senesac is particularly stoked about the beans they're using. "During the rebranding, we tried seven companies that are based in Vermont and roast in Vermont," he said. "We picked Backcountry because it's really tasty — and because the man who roasts the beans also sources the beans. It's a small process."

He's also excited about his staff. "I've met a lot of unhappy employees at coffee shops," Senesac said. "I want to make it so that everybody who works [here] is super stoked to be [here] and to serve coffee to the community. Nobody wants a barista talking down to them or being shitty to them." 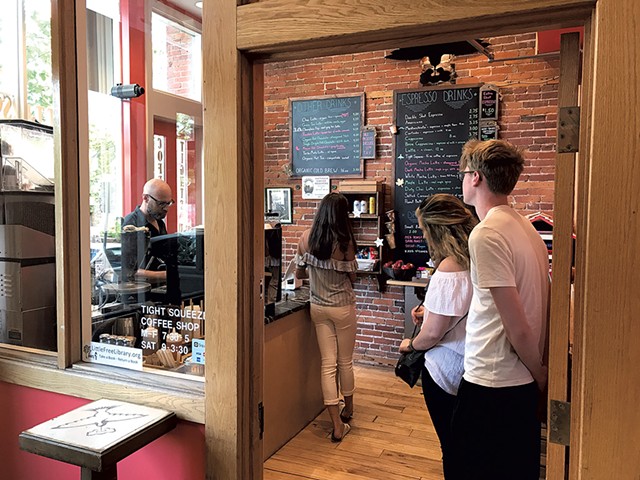 Tasting notes: It's nice to have medium- and dark-roasted coffee available for those who prefer cups with nutty flavors and low acidity. The brewed Yirgacheffe was super mellow. A peanut-butter-cup latte had a hint of peanut flavor without being too sweet.

Tight Squeeze Coffee Shop lives up to its name. When the line for drinks is more than three people deep, it extends out the door of the café and into the building's lobby. A slender bar and a handful of barstools accommodate those who opt to stay and chat or dig into some literature.

Among them one afternoon was Gabe Brunelle of Burlington, hanging out reading Sylvia Plath's The Bell Jar and taking occasional breaks to banter with co-owner Lisa Osornio and the other customers. Although Brunelle frequents several shops, Tight Squeeze "is my favorite place in town to get coffee," he said.

Osornio uses Earthback Coffee Roasters because nobody else in town is, she said, and because she enjoys medium- and dark-roast coffees, the company's specialty. It's not on trend, she noted, but she prefers beans that have spent a little more time in the heat.

Every aspect of the shop, from Osornio's coffee choices to the exposed brick walls and neatly hand-lettered chalkboard, is classic — and classy. 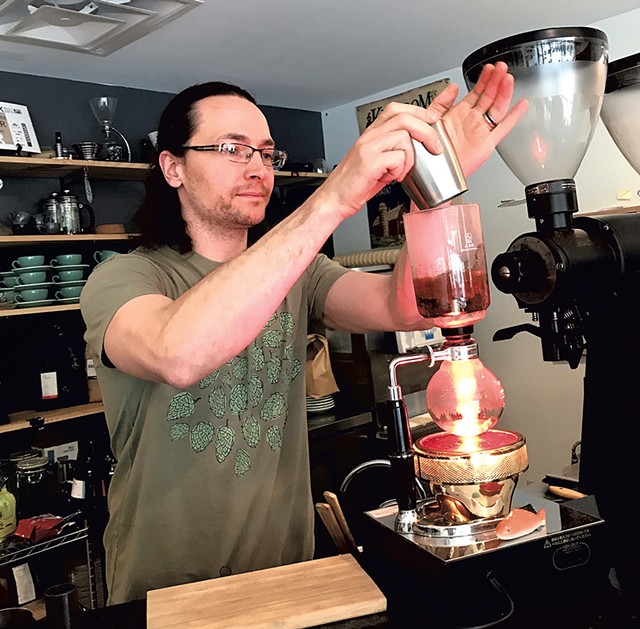 Coffee roasters: tons — new ones all the time

Snacks: baked goods from Monarch & the Milkweed and Miss Weinerz

Tasting notes: Complex cups are brewed to bring out subtle and interesting flavors. Pastries are excellent and aesthetically pleasing.

For a coffee connoisseur, Onyx Tonics is a dream come true. Jason Gonzalez, who co-owns the shop with his wife, Tiffany Farrant-Gonzalez, is a passionate lover of coffee with the awards to prove it. In 2013 and again in 2014, he won a UK-wide coffee-tasting competition.

Gonzalez brings a visible zeal to Onyx, but without snobbery. If you simply want to come in and get a creemee and a cup of coffee, that's fine. If you want to sit at the counter and watch him brew while discussing the flavors in your cup, that's fine, too.

Depending on the characteristics of a bean and its roast, Gonzalez might choose to use an aeropress or siphon, let the coffee drip, or turn it into espresso. Since the menu changes each week, there's always something new to try.

And, despite the plethora of beans Gonzalez brings in from roasters all over the continent (and one from the Netherlands) and the care he puts into each cup, the pricing is in line with other Burlington shops.

Onyx Tonics' décor is bright and spare, with mint and gray accents and eye-popping paintings by St. Albans artist Allyson Gutchell. There are coffee books and magazines to peruse, but the best part is hanging out with Gonzalez, and learning from him, while he practices his craft.

The Price of Ice

It's the time of year for iced coffee, and, for many people, that means scratching their heads over the difference in price between a hot cup ($2 to $3 in the Burlington area, depending on size) and a cold one (up to $4.50).

Why the diff? First, it's important to note that iced coffee does not consist of a regular cup of joe poured over ice. Cold dulls flavor, as does the water from melting ice cubes. So, to make the brew delicious at a cooler temperature, baristas start their chilled drinks with a stronger infusion. Stronger coffee equals more beans equals more money.

Then there are associated costs, including cold cups — even cheap plastic ones cost more than the paper cups used for hot beverages. If you go recyclable or compostable, the price is even steeper.

At home, ice may be something you make using a corner of the freezer, but cafés need an ice machine to keep up with the volume of orders. A new energy-efficient commercial version starts at $1,700. And then there's the water, electricity and maintenance needed to keep it humming. All of those costs are built into the price of a cup.

At Burlington's Maglianero, the cold-brew — made via a process more labor intensive than simply cooling hot coffee — rings up at $4. "Honestly, I would like to charge more, because it's one of our best-selling items," said manager Nathaniel Millar-House. "And it's one of our lowest-margin items, which it shouldn't be."

He keeps the price as is, he added, because "people will often be like, '$4 for a frickin' iced coffee?'"

The folks at Scout & Co., which has two branches in Burlington and one in Winooski, don't dig cold-brew. "We don't like the taste," said co-owner Tom Allen Green. So they stick with what he called "the Japanese method": cooling a super-strong brew by "shocking" it on ice. "It's the only way I've found to make an iced coffee taste good black," Green said.

And, he pointed out, as a smaller shop serving an artisan product, "We pay more for the coffee we get in, more for the cream and more for the paper goods. On top of that, we make delicious iced coffee that's fresh. Ain't nobody got time for weak iced coffee."

The original print version of this article was headlined "Bean Scene"