Others — generally considered somewhat nuts by the former group — respond to the same stories with, "Hey, I could do that!"

Sam Brakeley, author of Skiing With Henry Knox: A Personal Journey Along Vermont's Catamount Trail, is among the latter. In 2009 he paddled 740 miles of the Northern Forest Canoe Trail, which follows traditional indigenous travel routes through New England. In 2013 he retraced Benedict Arnold's trip from Augusta, Maine, to Québec City in a canoe. Brakeley, who lives in Sharon, published books about both trips.

In 2015, he made the voyage that is the subject of his latest nonfiction book: a 300-mile cross-country ski trip up the Catamount Trail, which traverses the length of Vermont from the Massachusetts border to its Canadian counterpart.

"I want to take some of that history beyond the armchair and into the outdoors with me," Brakeley said in a phone interview. "It's just a way for me to bring to life some of the history I'm reading about."

In the winter of 1775, during the early days of the Revolutionary War, a military officer from Boston named Henry Knox undertook a mission on behalf of the Continental Army. He traveled to Fort Ticonderoga in New York State to retrieve cannons and heavy weaponry and bring them back to help George Washington's troops outside of Boston. It took Knox, his men and their oxen six weeks to drag about 60 tons of artillery back across the icy New England landscape. 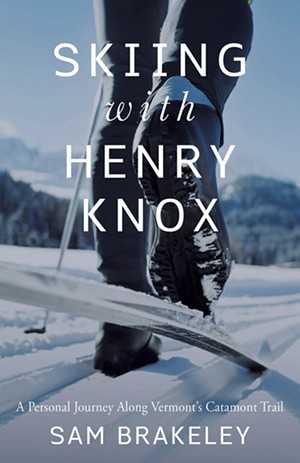 Brakeley, a stonemason and a writer, saw in Knox a kindred spirit. Knox was a passionate reader and a student of military history, and he had a taste for adventure. There wasn't much point in traveling Knox's original route, because it's mostly highway today. But the Catamount Trail was similar in length.

Skiing With Henry Knox alternates between the narrative of Brakeley's trials and tribulations while winter camping on the trail and the story of Knox's trek to Boston. It explores aspects of the personal lives of both men and finds plenty of comparisons.

Knox was married to a woman named Lucy, and he wrote countless letters to her throughout the war. He seemed torn between his duty to serve the revolutionary effort and his desire to be near the woman he loved.

Brakeley was experiencing something emotionally similar. His longtime partner, Elizabeth, was moving to Utah for her medical residency. Brakeley wanted to be with her but felt deeply rooted in New England.

"I love these woods," Brakeley writes in the book. "I love the rivers, lakes, ponds, and streams of New England, the rocky forest floor and steep mountains. I love the open hardwood groves and thick evergreen stands. I love walking beneath the forest canopy and coming upon an old foundation or crumbling stone wall."

Brakeley also writes, "I love the attachment I feel to this place. I know its ways, its interstates and back roads, and all the twists, windings, and ruts that come with them."

It felt like an impossible decision. So he went skiing. Brakeley's personality is best captured in a quote from Elizabeth that comes early in the book, when he told her of his plan to ski 300 miles. "I thought that was just a pipe dream," she said. "You get these ideas in your head, and you just can't shake them."

But that's the thing about the kind of person who canoes hundreds of miles and hikes the Appalachian Trail: Doing it is the whole point. Brakeley said that the simple life on the trail appeals to him and that, after a few days into the trip, he gets a kind of runner's high and feels as if he could go on forever.

He also felt that time alone in nature might help him decide whether or not to go with Elizabeth. Throughout the book, Brakeley explores what makes the prospect of leaving New England so hard. His love for the landscape is apparent in his prose, but midway through the narrative he also begins to describe his family, all scattered throughout the region, and how close he feels to them. Brakeley was raised in Massachusetts but spent time with relatives throughout Vermont.

"I have so many positive memories rooted in place and rooted in this place in particular," Brakeley said. "The general feeling I get when I'm here is one of support and caring and kindness and love, because I've been nurtured in such a positive way in this environment ... The place and the community and the family have become interwoven."