Sam and Somba Make an Astounding Debut on The South Cove 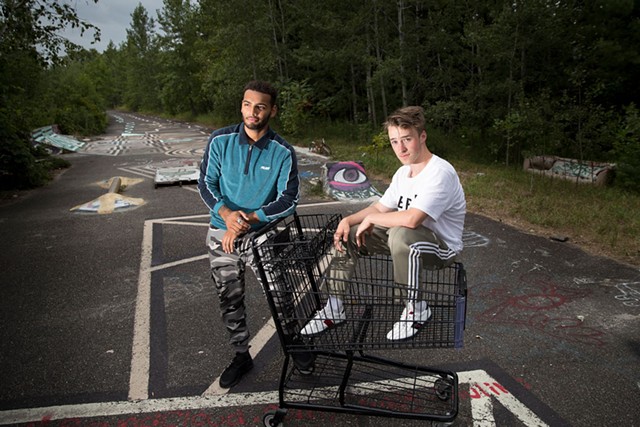 In late July, Burlington-based hip-hop duo Sam and Somba unceremoniously dropped a six-song EP called The South Cove. Since then, its individual tracks have racked up more than 10,000 plays on SoundCloud. That's an impressive feat, given that they did little to promote the project other than share it with friends. They didn't even submit it to Seven Days.

Front man and lyricist Sam Paulino and producer Somba — real name Caleb Hoh — have been working together for nearly two years. They see themselves as leaders in what they consider to be a new wave of Vermont-based hip-hop.

"[We have] a whole new sound," says Paulino, sitting at a picnic table in Burlington's Oakledge Park. "We're not the first people to make rap music in Vermont. But I think we are a new generation."

Based on the strength of their debut, they could very well make good on that proclamation.

Both young men are locally raised — though Hoh was born in Philadelphia. If they look familiar, perhaps you've seen them at their day jobs.

Paulino, 20, is a host at both ArtsRiot and Leunig's Bistro & Café. He sports a strip of dark, low-pile curls and has a sharp jaw line and a manicured layer of scruff.

Hoh, 17, can be seen peddling (and pedaling) freshly baked bread from August First Bakery & Café via its bicycle delivery service. The blond-haired, blue-eyed beatsmith graduated from Burlington High School in June and will attend the University of Vermont this fall to study music technology.

Paulino's parents have spent some time in the limelight as well — particularly his mother, local radio personality Chantal Paulino of Star 92.9 FM (and formerly of 95 Triple X).

Independently of one another, Paulino and Hoh each began experimenting with songwriting and production during their respective freshman years in high school. Although they grew up with friends in common, their first intentional interactions took place not in person but online — specifically, through SoundCloud messaging.

It wasn't until they teamed up in late 2015 that the two began to actualize a cohesive artistic vision. Paulino had graduated from South Burlington High School earlier that year and was living in Mesa, Ariz., with his father, Arturo Paulino, a retired minor league baseball player. At that point, Sam was focusing less on music and more on a budding acting career. But, he says, grueling audition cycles and toxic industry pressure left him feeling lost.

With his acting career on hold, Paulino returned home in 2016. He and Hoh had already begun working on early incarnations of what would become The South Cove.

Like many collaborators, the duo doesn't have one fixed method for putting a track together. It might start with one of Paulino's verses, or Hoh might create a particularly compelling groove. Either of them might discover a sample that provides the foundation for a new cut. They describe a mutual understanding of their roles and have only limited crossover.

"His input [affects] the creative drive when it comes to making the beats," says Hoh, referring to Paulino's role in production.

"[But] I don't think you're ever going to hear him say, '[Change] that multiband compressor right there [and] the dithering on top of those formants,'" Hoh jokes.

The South Cove flows with a dreamlike fluidity. From its slow-burning opener, "Lost (Intro)," to its avant-garde closer, "Wavs. (Outro)," the songs drift in and out of obscure samples and candid recordings Paulino made with his phone. A mix of live instrumentation and nuanced software instruments are put through multiple stages of tweaking and augmenting, making it difficult to tell which sounds are samples and which are original.

Hoh makes dynamic choices with sound and form. At times, he bends Paulino's vocals to helium highs only to drop them to deep lows — often within the same phrase. In a similar contrast, Paulino seamlessly switches from rapping to singing in a single breath.

Lyrically, The South Cove extends an all-access pass to Paulino's deepest fears and longings. His candor is devastating on "Casablanca," a sultry deliberation on his first experience with true, unrequited love. Conversely, he also depicts fantasized projections of how he sees the world. For instance, he sings confidently about the trappings of club life on "Punch Drunk Love," despite the fact that he's still too young to even get into most clubs.

Paulino does engage in the machismo often associated with hip-hop, though he keeps his bravado in check. On "Punch Drunk Love," he celebrates women's bodies, but rarely gets specific about physical attributes that get his blood pumping.

"It's kind of all-inclusive," Paulino says, noting his choice to not exclude any listeners by naming a set of defined characteristics.

He also gets a little bit snarky through wordplay and clever phrasing. Just before the hook on "Punch Drunk Love," Paulino realizes that a potential conquest isn't interested. He raps, "If you ain't with it / Would you please introduce me to your friend on the left / With all due respect." On the one hand, there's an implied interchangeability of women. On the other, he's just being honest about wanting to make a carnal connection.

The final track, "Wavs. (Outro)," is perhaps the most revealing and monumental song on the EP. Squawking seagulls and yearning guitar and trumpet, as well as Paulino's slam-poetry pacing, conjure visions of troubadours busking on the Venice Beach Boardwalk. He fetishizes his vision of a West Coast existence, thus exorcising his deferred California dream. Meanwhile, Hoh takes on a unique challenge: It's the first time he's produced a track with nearly all-live instrumentation.

Sam and Somba are now planning their next move. They recently formed a production group called Possibly Human with videographer Shane Kaseta and rapper Hank "H.C." Collins. They intend to roll out an interconnected series of abstract web videos and short films.

They're also flirting with the idea of putting together a full band, which could include some of the guests who appear on the EP, such as guitarist Julian Segar-Reid.

Paulino and Hoh are quick to move on to the next thing — even if they're not exactly sure what that might be.

"[We] make such different-sounding music every day," says Paulino. "If we drop [another] project, it's going to be so different."

The original print version of this article was headlined "Mic Drop"