Salmon Take a Ride Upriver at the Winooski Dam 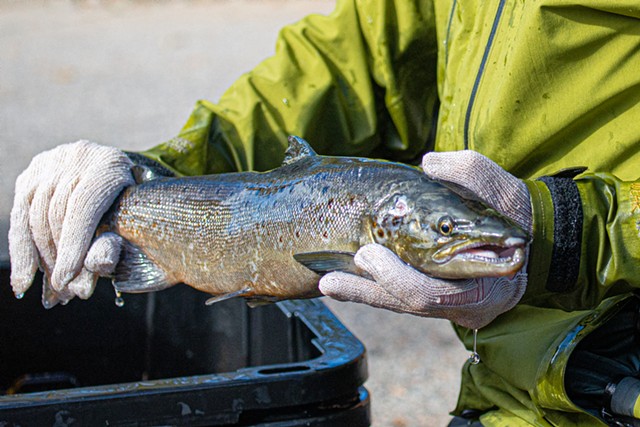 The sound of whirring machinery filled the air at the Winooski One Hydroelectric Plant on Wednesday. Slowly, a metal container made its way up the side of the dam as a small crowd looked on excitedly.

At the top of the landing, an attendant wearing a waterproof bib prepped a work station for the container's arrival, arranging chemicals and measuring equipment on a small makeshift table.

The precious cargo inside the tank? Landlocked Atlantic salmon.

The six salmon transported on Wednesday were some of 121 collected at the Winooski dam so far this season, putting the program on track for "one of our best years yet," said Lee Simard, fisheries biologist with the Vermont Fish & Wildlife Department.

The number of these coveted fish migrating from Lake Champlain to the Winooski River is on track to top most recent years, indicating that the state-run program to improve salmon health is working. The all-time high for the entire season was in 2011, when 189 salmon were counted.

Landlocked Atlantic salmon are stocked in Lake Champlain by the Vermont Fish & Wildlife Department to provide recreational fishing opportunities to anglers. The native salmon population was wiped out by the early 1900s, but restocking efforts that began in the 1970s have led to a modest population growth.

The salmon receive a special leg up on their annual spawning route: ground transport.

Since 1993, upstream-bound salmon have been lifted via fish elevator to the top of the Winooski One dam, transferred to a holding tank and driven 15 miles to an upstream release point in Richmond.

Without a “trap-and-truck”  operation in place, the fish would be unable to reproduce. The warm temperatures of the lower Winooski make it nearly impossible for salmon to spawn, and upstream migration to cooler water is blocked by three impassable dams, including the Winooski One dam.

For that reason, the Burlington Electric Department and Green Mountain Power — which own the dams — shoulder the cost of transporting the fish. As part of their operational agreement, they’re required to offset the negative impacts of managing a hydroelectric facility.

The fish lift is in operation between September 15 and November 15 each year. At the base of the dam is a high-flow current, which attracts fish into a holding tank. A few times per day, the fish are lifted to the top of the dam , where they are tagged, measured and weighed by biologists before being driven to the release point.

On Wednesday, Simard, who was decked out in rain gear, gingerly placed each salmon in a sedating fluid so that they could be measured and observed before embarking on their journey to the Richmond release point. Simard collected tissue samples and tagged the fish so they could be tracked in future years.

“This one has a sea lamprey wound,” Simard explained, pointing out a white sore on the side of one salmon’s body.

Sea lamprey have been one of the greatest threats to the species in past years. The parasitic fish species attaches to a fish's body and sucks out its bodily fluids. For years, they’ve caused salmon populations in Lake Champlain to dwindle. Other invasive species, such as alewife and spiny water flea, are also to blame.

But efforts by Vermont Fish & Wildlife and the U.S. Fish and Wildlife Service to abate these threats are starting to pay off. Simard said he’s seeing fewer salmon with sea lamprey wounds.

While the salmon typically go upstream to spawn, they return to Lake Champlain in the spring. An already tagged fish back at the Winooski elevator was a sign of progress. Most of the salmon, though, don’t live past three years old.

Simard hopes this year’s salmon counts mark a noteworthy turn in the species’ future in Vermont.

“We’re bringing the salmon up the Winooski River to provide fishing opportunities,” he explained. “So I hope people go out and utilize that and catch some fish."