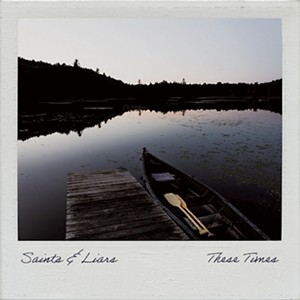 Sometimes you have to make a shitty situation work for you.

Southern Vermont's Saints & Liars have traveled their brand of roadhouse roots music to venues across New England since forming in 2012. As it did for so many other hard-touring acts, 2020 served as one big kick in the privates for the band. But in the spirit of their rugged, Americana-influenced sound, they rolled up their sleeves and flipped the script.

Despite being together for almost a decade, Saints & Liars had never recorded so much as a lick of their own music until the lost pandemic year. When guitarist/lead vocalist Jed Hughes and bassist Chris Rogers formed the group, they were an acoustic act, playing covers in living rooms.

These days, the band also features drummer Nolan Rolnick and Mike Farkas on the resonator, creating a four-piece capable of tackling gentle bluegrass and barnstorming country rockers in equal measure. Together, they used their gig-less year as a chance to finally record a debut record.

These Times has the feel of a long-gestating work. The songs are simple in their basic construction but have been layered with care and skill.

Album opener "Day to Day" features a gruff, transcendent vocal from Hughes. "Well the old Lake Street winters ain't where I belong / the city ain't where I should be /all the people complainin' there's too many people / I believe in Green Mountains and me," he sings before Farkas joins in with a powerful harmony. The rollicking love letter to country living, hard drinking and Vermont sets the tone for These Times.

The title track serves as the album's comment on life during the pandemic. Thankfully, it avoids some of the clichés that abound on the subject — there's nary a lyric about being on Zoom.

"These times, these times, they're going to swallow me whole," Hughes croons over acoustic guitar and ghostly pedal steel. The song takes a turn away from the darkness, though, with lyrics about the sun shining through a lover's hair, and fishing down by the lake.

The message is strong: Turn to nature to alleviate the madness of modern living. You can feel the desire for freedom on the track — that sense of "let me out of this house before I lose my fucking mind."

By and large, Saints & Liars are here to play some tunes, stamp some boots on the floor and throw back a cold drink. In "High Life," the boys lay down a greasy shuffle that Rolnick turns into a driving rocker. It's one of those metaphor songs that can wear thin, but its charm and the band's tightness save it. Besides, a tribute to "the Champagne of beers" seems incredibly on brand for the record.

There's no polishing the turd of losing a year's worth of gigs. Saints & Liars make the lost year count for them with These Times, a strong debut filled with well-written songs. Download the album at saintsandliars.com. The band plays Saturday, August 7, at the Vermont Roots Roadshow in Londonderry.