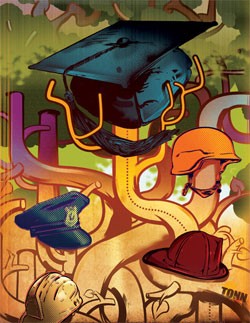 Sometimes, Michael Bosia says, he likes to “torment” his students at Saint Michael’s College. The political science professor tells them that when he pursued a bachelor’s degree in 1979, one semester at California State University cost him about $60. Even adjusted for inflation, that price tag must sound puny to the students and parents who now shell out close to $20,000 for one semester at the small liberal arts school in Colchester.

But the professor also reveals another part of his past: Neither of his own parents attended college or even finished high school. In a phone conversation with Seven Days, Bosia says that where he grew up in the San Francisco Bay area, parents more often sought jobs as policemen and firefighters. His mother stayed at home until he and his older brothers finished high school, while his father drove a taxi after serving in World War II.

By sharing this, Bosia hopes to make other “first-gen” students in his classroom take notice.

“I think that kind of coming-out process as a first-generation college student, it tells them there are things that can be achieved, and it’s not something to be ashamed of,” Bosia says. “We all assume that if the professors have PhDs, their parents do — like PhDs are a family tradition.”

When Bosia delivers that same piece of his autobiography on Thursday, September 5, it won’t be in front of his own students. He’ll be speaking as part of a panel discussion open to all first-gen students in St. Mike’s incoming freshman class. That event — as well as an invitation-only welcome dinner this Sunday — represents a new push by the college’s Center for Multicultural Affairs to better orient and empower first-gen students for what can be a daunting experience.

At the discussion, Bosia will most likely acknowledge that the difficulties facing first-gen students are at least twofold. On the home front, they may find relationships with less-educated family members and friends strained. And, as they plan their future, it can be hard for first-gen students to visualize the academic and professional opportunities available beyond a bachelor’s degree.

Bosia was a case in point: Only after working on the staff of the California legislature for 10 years did he realize that graduate school was an option, he says. He went on to earn a master’s and PhD from Northwestern University and now regularly travels the world for his research on the challenges of globalization to local movements. But his success has created distance, he concedes, between him and his family.

“My mother makes a point of calling me ‘professor’ when she wants to take me down a notch or two,” Bosia says. He also Americanizes his pronunciation of French words to avoid being mocked for sounding pretentious.

Bosia describes two first-gen St. Mike’s students who have responded well to his own example. One of them, an underperforming student whose father was a tradesman, perked up when he heard the professor’s story. Ultimately, Bosia says, the student took more classes with him and began to excel.

The other student, Ryan LaRochelle, had Bosia for his academic advisor. The son of a concrete-safety superviser and a teacher’s aid in Pittsfield, Mass., LaRochelle entered college intent on becoming a high school teacher. Now 24, he graduated from St. Mike’s in 2010 and is pursuing a PhD in political science at Brandeis University. Reached by phone, LaRochelle says that Bosia’s advice helped him explain his postgraduate ambitions to his parents, who had never envisioned their son as a professor.

Multicultural student affairs director Moise St. Louis, who enlisted Bosia and other faculty members who were first-gen college students for next week’s panel discussion, hopes similar success stories will result from such events.

“First-generation college students are not a group that we often think a lot about,” St. Louis says over the phone. He explains that the goal of the special programming is “to identify the experiences that first-generation students have that may get in the way of their success, and try to provide the program that can really streamline services in the front end that can make their experiences successful.”

Based on educational profiles submitted by the 500-odd students entering the school this year, St. Louis determined that 70 qualified for formal invitations to the dinner and discussion. At the time of this writing, 40 had responded.

The events, as well as peer and faculty mentorships that will continue throughout the school year, are the culmination of a yearlong effort by St. Louis to speak with first-gen students from across Vermont and develop ways to address their issues.

For April Hoyt, one of the students who helped St. Louis plan the events, just completing her college application and financial-aid forms proved a challenge. Speaking by phone, Hoyt says she often plodded through the sea of paperwork without her parents’ help. With a mother working in retail and a father who has had trouble finding employment, Hoyt forged their signatures when neither was around.

Now entering her senior year and considering graduate school, the South Burlington native and psychology-philosophy double major has taken out federal loans, landed several scholarships and held down on- and off-campus jobs. Among classmates whose parents provided advice and living allowances, Hoyt has often faced her own challenges in silence.

“I was working and going to school full time. It was hard, knowing that I had to figure out all that stuff for my education,” she says. “People just didn’t understand the stress. I couldn’t participate in the social scene. I didn’t have many friends. People can’t fathom that at all.”

Citing a “socioeconomic stratification” at St. Mike’s, Hoyt says that her peers have reacted in different ways to her working-class background.

Hoyt now credits St. Mike’s with providing counseling and resources. St. Louis — or Mo, as she calls him — was helpful. So was Crystal L’Hôte, a philosophy professor and mentor who will sit on the panel next week. This summer, Hoyt has been helping out with orientation sessions organized by St. Louis’ department for first-gen students, as well for students from other cultures and backgrounds.

St. Louis isn’t aware of many schools with similar first-gen programs, he says, but he describes the University of Massachusetts Amherst, a much larger school, as one that is seriously considering how to bring them into the fold. Throughout the year, St. Louis’ department will offer follow-up resources tailored to the needs of each student, whether related to financial aid or course selection.

“What we don’t want to do is assume that every first-generation student’s needs are the same. We want to individualize the programs, so they can get the needs they have met,” St. Louis says. “That’s the beauty of working at a small institution, that you can, in fact, be nimble about it.”

According to Jacqueline Murphy, an alum and director of undergraduate admissions at St. Mike’s, that ongoing support couldn’t arrive at a better time.

“Getting them in the door is one thing. Getting them to stay for four years can be a challenge,” Murphy says of low-income students. She cites studies that suggest a growing gap in college-completion rates between students from high- and low-resource families.

Murphy, who will also speak on the panel, agrees with St. Louis about the grit and determination of the students who soldiered through the application process to get into a college of St. Mike’s caliber and cost.

Even though he jokes with his students about that cost, Bosia says he recognizes what sets their private, liberal arts education apart from the one he got at a state school. That’s not just book learning, he notes, but the experience of living in a dorm and developing a network of friends and alumni — and benefiting from the guidance of programs like the first-gen events next week.

Bosia recalls that when he looked at equivalent liberal arts schools on the West Coast 30 years ago, the tuition scared him off. But now, he says, scholarships and other financial resources are available to help students defray the cost. The result is a much more thorough, game-changing education, Bosia concludes — “the kind of education that’s going to put them on a different playing field.”

The original print version of this article was headlined "Class Conscious."