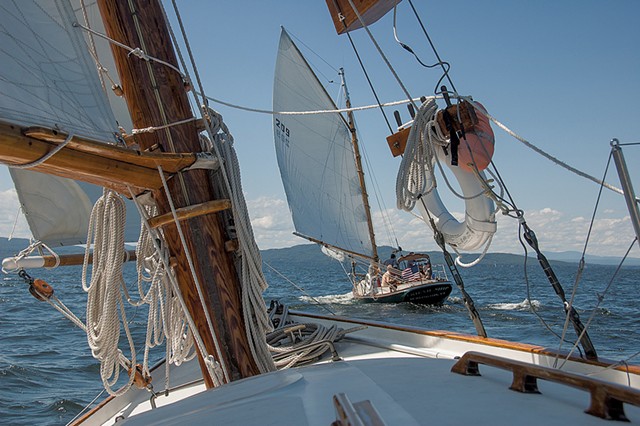 Capt. Hannah "Diddy" Langsdale has a favorite moment on every cruise she pilots on Lake Champlain. When her sloop reaches the open water and the sails are raised, she'll switch off the "iron jib" — aka the motor — and let her passengers take in the peaceful and majestic beauty of hauling across the water powered by the wind.

Langsdale is the owner of Whistling Man Schooner Company. For more than four years, the company's two-hour sailing excursions have been ranked the No. 1 tour in Burlington on the online travel site Tripadvisor.

And with good reason. Whistling Man offers unique but affordable daytime, sunset and moonlit cruises that leave from the Burlington waterfront. In years past, most of its customers were out-of-state visitors. This year, however, Whistling Man is seeing an uptick in local bookings, as Vermonters seek safe and socially distanced outings that are close to home and can be done in small groups.

"My goal is to get people to realize what a gem they have in their own backyard in Lake Champlain," Langsdale said. "There's so much history and beauty here, and I just want people to appreciate that even more."

Langsdale, 26, started working for Whistling Man in 2016 as a deckhand, with little prior sailing experience. Two years later, she had earned her captain's license and bought the company from her mentor, Mathias Dubilier, who still works for her as a captain one day a week.

Whistling Man owns two sister vessels — the Friend Ship and the Wild Rose — both replicas of the 19th-century, wooden-rigged cod and lobster fishing vessels that were traditionally used in Maine. Each is 48 feet long, but, due to slightly varying configurations, the crafts hold different numbers of passengers. Their designs cut through the waves easily and are smooth and comfortable to sail, even in choppy conditions.

Both boats are designed with their lines "led aft," meaning all the ropes to raise and lower the sails run back to the helm so they can be piloted by just one person. However, Langsdale always has a captain and deckhand aboard, both to crew the vessel and to attend to passengers' needs, whether that's opening a bottle of wine, spreading a cheese plate or taking photos.

Assuming conditions are safe, Langsdale added, passengers are invited to take the wheel and raise and trim the sails. That said, passengers aren't expected to do anything at all. They can simply kick back, dip their feet in the water and enjoy the ride.

Along the way, Langsdale and her crew recount aspects of the history of this part of Lake Champlain and share stories and facts about the features they pass, such as the Champlain Thrust, Dunder Rock, Juniper Island and various Burlington-area shipwrecks. Cruises generally last two hours but have no set course or destination.

"We kind of go where the wind takes us," Langsdale said. "It's just a great way to see Lake Champlain and get a different perspective of Burlington." 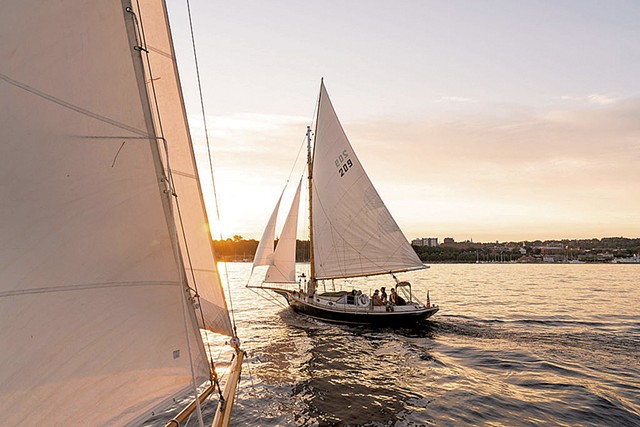 Due to COVID-19 and social-distancing requirements, Whistling Man is limiting its tours to six passengers on public (mixed-group) cruises. On private cruises, the Wild Rose can carry up to six passengers and the Friend Ship up to 10. Although most people book their tickets in advance, Whistling Man also accepts walk-ups as available. Cruises start at $50 per adult and $35 for children over 5, or $300 to $500 for the entire vessel.