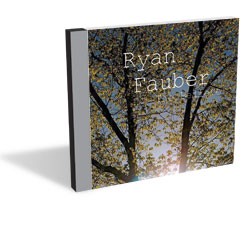 With a title like The Believer, you’d think Ryan Fauber’s debut studio album would be a tad brighter. Instead we find raw, unpolished folk music. In his lisping, raspy voice, the Burlington-based songwriter sings about the darkest plights of struggling America. The album pays homage to traditional American song forms through chord progressions and rhyme schemes, but addresses a modern niche with uncomfortable specificity.

The first track, “Any Day,” comes in slowly with a steady acoustic guitar. It’s a bittersweet ballad of hope that drags on for nearly six minutes. “Confusion,” however, goes straight to the business of killing puppies, assaulting ladies and desecrating childhood. At this point, it’s too late to yell, “Earmuffs!” And, thematically, Fauber’s indelicate pathos becomes even more overt as the album spins on with “Ballad of Grant Seely.” Fauber attacks with a crudely played guitar and brutally declarative lyrics. This story-song goes step by step through the alcoholic demise of a formerly successful family man. The zeal with which this tunesmith “tells it like it is” for modern America would make Utah Phillips proud.

Fauber’s style is relatively consistent throughout. “It’s a Chore” features the same acoustic strumming, predictably rhymed lyrics and Fauber’s unique voice rasping his words with conviction. But “The King,” less coarse and more endearing, stands out. It conjures the image of an elderly Johnny Cash relating sorrow through his cover of Nine Inch Nails’ “Hurt.”

“Dope Child” staggers along dismally with extremely dark imagery and symbolism. Fauber’s lines convey the suffering of a protagonist “burning from the scratches / from the mosquitoes that are always hungry.” Antiquated symbols — prison chains and lantern-lit graveyards — set up this song like a cowboy’s dirge. Unfortunately, Fauber’s attempts to weave more relatively modern metaphors into his spooky tale are comparatively clumsy and ultimately fall flat. Though the repetitive form and rhyme might be Dylan-esque, the song lacks dynamic range or soulful flourish.

The Believer resolves optimistically with the unexpected voice of Burlington singer Samara Lark on “More Than Gold.” Her voice is warm and comforting, like a mother’s unconditional love. “More Than Gold” is wholesome, à la Judy Garland, and Lark sings with a similar style. While “Dope Child” professes that “pain will keep you honest,” “More Than Gold” affirms “I love you,” again and again.