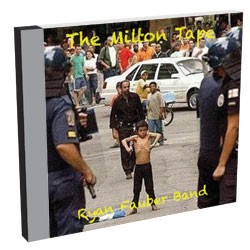 Sometimes outdated media can amplify nostalgia. When memories of wistful yearning are documented on VHS tapes, cassettes or in tattered photographs, they seem somehow more meaningful. Burlington’s Ryan Fauber Band channel this sentiment on a new release, The Milton Tape. It takes a minute to adjust to the practice-room-style recording — originally captured on a tape recorder in 2007 — and several more to comprehend it.

Leff keeps the album flowing with a get-to-the-point approach, which is exactly what the songs call for. The production — or lack thereof — obstructs the drums somewhat, but the instrumentation remains fairly well mixed considering this traditional, gather-around-the-microphone approach.

Salzman, a longtime friend of Fauber’s, offers discordant guitar soloing in the vein of the Meat Puppets’ Curt Kirkwood. His contributions, which are vital to the album, are particularly unmasked on “The Devil Shows His Hand,” in which he plays hastily.

Fauber, who is passionate and skillful with words, has a guttural delivery, which can make his lyrics difficult to decipher. He sounds a bit like GG Allin, if the late shock rocker were covering Warren Zevon. Fauber seems coolly indifferent when expressing himself, and that distance coupled with frequent rhythmic repetition makes the songs tend to meld together.

Album closer “The King” is a memorable highlight. Against a softer musical backdrop, Fauber’s up-and-down vocals weave an unnerving story about self-imprisonment and unknowing.

Unfortunately, The Milton Tape was delivered into the digital world with a computer program called Audacity, which cancels out some of the sepia-tone sound quality of the original tape. The record is deep, poetic and at times darkly likable, but it may leave you wishing you could hear it all in analog. The Ryan Fauber Band certainly capture a moment here, but let’s hope to hear a studio follow-up down the road.

The Milton Tape by the Ryan Fauber Band is available at jenkerecords.bandcamp.com.