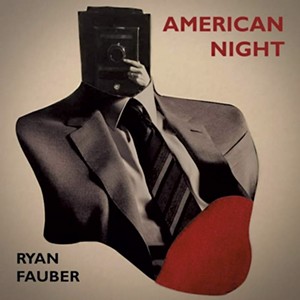 A few years ago, I saw Bob Dylan perform at Shelburne Museum. While he was never at the top of my list of must-sees, I decided it was worth the $75 to hear a living legend.

After Dylan finally ambled onto the stage, my family and I lasted all of 20 minutes before folding up our lawn chairs and heading back to the parking lot. The man may be an undisputed songwriting genius, but it's no wonder that so many other performers have made his songs famous.

Listening to Burlington songwriter Ryan Fauber's latest release, American Night, I couldn't help but feel the same way. Given the amateur production and Fauber's wobbly, gravelly voice, it was hard to appreciate his songwriting. However, with a little patience and tolerance, I found a number of solid songs with shrewd lyrics and pretty melodies. Overall, the album is a mixed bag of apt social commentary and ambiguous rambling.

In the album's opening folk track, "Solo Operation," obligatory harmonica introduces Fauber's vocals. What begins as a song seemingly about American consumerism morphs into a general list of complaints, with Fauber's anger on a steady upward trajectory.

The next song, "Are You With Me?," shone in the hands of a silkier vocalist. In 2012, another Burlington-based musician, Greg Alexander, covered it on Any Day, his collection of songs by Fauber. The result was a smooth, digestible love song. Though Fauber's rendition remains gruffer and grittier, he embellishes the main vocal line with background harmonies that fill out the chorus and offer a nice change from some of the other tracks on American Night. The harmonica inevitably finds a place in this one, as well.

The songs that work best on the album are those that employ a soft touch rather than a heavy hand. "Cruel Games," "Just Like You" and "American Night" fall in the former category, and the title track is the most memorable, straddling the sounds of Bright Eyes and Pink Floyd.

Fauber claims to have written more than 300 songs since 1995, including those on his past albums, Then Came the Thunder (2015) and The Believer (2012). His latest release suggests that he is content to create music that lives in the same brooding, ominous space as his past works.

Here's hoping someone with a voice and style that's easier to listen to will record a cover of Fauber's American Night songs.

American Night is available at ryanfauber.bandcamp.com.