The Chaffee Art Center in Rutland has been closed since May. But big plans are afoot there, and not just to renovate its historic building or expand arts programming — though both will occur. Executive director Jim Boughton and the center's board of directors, led by new president Dimitri Ampatiellos, are on a visionary mission. Their work, said Ampatiellos, will ensure that "art takes on a bigger, more expansive concept" at the center.

The Chaffee Art Center, which was founded in 1961 by the Rutland Area Art Association, is located in the 1896 George Chaffee House on South Main Street (U.S. Route 7). Rutland businessman George Thrall Chaffee built the Queen Anne Victorian mansion for his family, who resided there until the 1930s. The house was boarded up until 1961, when it reopened for the Rutland Bicentennial. With its two turrets, stone front entrance arch and exterior foundation of machine-cut marble blocks, the place is architectural eye candy.

The Chaffee family donated the building to the arts nonprofit; Boughton called it a "huge piece of our identity."

But the center's new expanded art concept starts outdoors. Working in cooperation with Green Mountain College and the University of Vermont, the Chaffee is embarking on a "five-year research project that will completely transform the grounds," Boughton explained. Using the Chaffee as a classroom, the two schools "will introduce Rutland to the concept of permaculture."

Permaculture landscaping means more than just planting shrubs and trees. Every plant in such a landscape is chosen specifically to provide food, shade or pollinators to those nearby. At the Chaffee, the transformation of the grounds will double as an educational undertaking that addresses storm-water runoff, sewage, pesticide exposure and other topics critical to a healthy, sustainable community.

"We're developing the outside of the Chaffee to look beautiful and to be as creative and expressive as the inside of the building," Boughton said. "It will also be educational, identifying plants and explaining why certain things were planted and where. It can link us to farmers, gardeners and landscapers."

Bringing the community to the Chaffee and the Chaffee to the community are goals integral to the art center's plan. While the building is currently still closed for renovations, opening dates will soon be announced. The Chaffee has maintained a public presence: its 56th annual Art in the Park took place in August and October; in December, it is running a downtown pop-up ArtBeat Gallery and hosting a live music event; educational programming will resume in 2018. 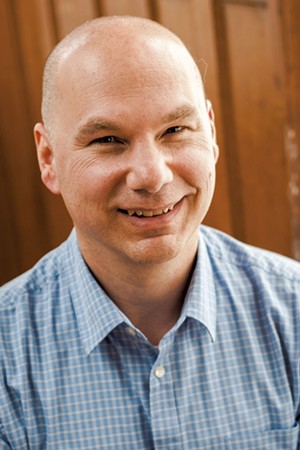 When the center reopens, the new ArtBeat Café will welcome visitors and provide a place to socialize and enjoy a meal or cup of coffee. From there, people might wander through the upgraded gallery space or attend one of 100 classes.

The café will also provide a classroom for culinary arts training, Boughton said. After renovations are complete, the Chaffee will offer classes in microbrewing, organic gardening, writing, quilting and cooking international cuisine.

"We'll always offer painting, watercolor and kids' classes, but we're looking into other ideas, like the art of gardening or the art of composting," Boughton said. "We want to connect with the community in a broader way."

An art-therapy program, new to the education department, will employ a mobile unit — a van carrying art supplies and musical instruments — to bring art classes to community members who have dementia, autism or behavioral issues.

The man behind this broad vision for the Chaffee was board president Rick Twigg, who died of a brain tumor in September at age 56. In early 2017, Twigg assembled a new board. In May, he convinced Boughton to return to the role of executive director, which the latter had held a decade ago. Boughton has also worked at the Chaffee as a volunteer, teacher and gallery manager.

Neither Twigg nor Boughton could have imagined what a difficult year 2017 would prove to be. Instead, they imagined what could be. Twigg led the board in creating the master plan that includes interior and exterior renovations to the historic building, repurchasing the carriage house (which had been sold a number of years ago to relieve financial troubles) and creating an entire campus for the arts.

According to a tribute in memory of Twigg on the Chaffee's website, Twigg saw great potential in the Chaffee, envisioning it as a community center for locals and a destination for others to experience Rutland's charm and history. He saw such a place as being accessible to all, with children- and family-oriented programming playing a dominant role. Twigg believed that "art" encompassed visual, literary, musical, culinary and performance arts and more, and he hoped to bring them all to the Chaffee.

After Twigg's death, the board took time to mourn and reflect on the organization's future, said Boughton, temporarily putting plans on hold. Then the members got to work, meeting weekly with nonprofits devoted to historic preservation and other endeavors. The board accomplished weekly goals and continues on an ambitious path, said Ampatiellos, who was Twigg's life partner and now serves at the board's helm.

"Everything is a five-year time frame," Ampatiellos said. "We've begun the first phase of the permaculture project, which included excavating. We trenched out and laid conduit from the mansion to the barn."

The Chaffee board is working with Vermont Historic Preservation and Rutland architects NBF Architects, who will lead the design team. Porch railings for the house exterior are being specially milled to resemble the original rails as closely as possible. "We'll be putting in an elevator and making the house ADA-compliant," Ampatiellos noted. "There w ill be a wraparound deck and access to the third floor, which has never been possible."

The rear of the house will be expanded to accommodate the café. Staff are at work developing the Chaffee Preschool and Children's Creativity and Imagineering Center, a full-service preschool and after-school art and creativity space to be located in the carriage house.

"I believe very strongly in collaboration throughout Vermont and in our city of Rutland," Boughton said. "We're really looking to connect with all of the arts organizations in a different way than we have in the past.

"It's quite powerful when we all work together and speak as one voice," he added, "and create Rutland as an arts destination. "