The College of St. Joseph offers an education, and a home, to Vermont foster kids 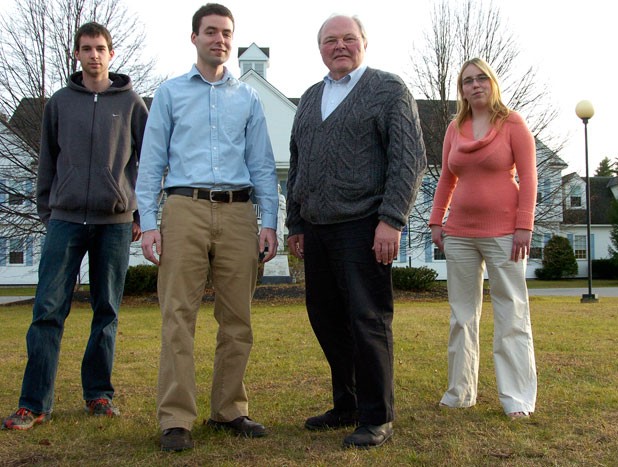 Peter Guetti’s home these days is a modest dorm room at a small Catholic liberal-arts college on a wooded campus in Rutland. He left his family’s home at age 11 and hasn’t lived there since. Having spent three years in guardianship and four years in two foster homes, he finds the concept of “home” something of a moving target. “The College of St. Joseph is my home at the moment,” he says.

When Guetti, 19, started college hunting after graduating from Mill River Union High School, he wanted a school that offered a degree in criminal justice. The College of St. Joseph had that. What it also had to offer him was a new, pioneering program designed specifically with foster children in mind — a program that has attracted national attention.

Statistically, children who have come through the foster system have a hard time in college. Not only do they face the brave new world of personal responsibility common to all college students, but they also undertake a college career with few of the usual supports: a “bio-family” to do their laundry and back them when the going gets tough.

How to help foster children succeed in college was a conundrum that nagged at CSJ President Frank Migliore for several years, until, in 2006, he decided to do something about it. He began reading the research on children in foster care and came to the conclusion that what they needed was a comprehensive program with a smorgasbord of social services from which the students could pick and choose.

“I started out thinking in terms of groups of people,” says Migliore, “but it comes down to individuals. The real challenge is to customize what you do. All their stories are different, and so are their needs.”

The result of his efforts is called STEPS, an acronym for the rather tortured title Students Taking an Effective Path to Success. The first six students were accepted in the fall of 2008. Half of them dropped out, but nine more signed up this year, bringing the enrollment to 12. That’s less than a third of the 40 students Migliore figures he needs to keep the program afloat financially.

The only common denominator among these students is that they’re foster children. Although Guetti remains friendly with his second foster family, he had no place to call home once he left, so the year-round operation of STEPS matters to him. “Home” is now his CSJ dorm room, where he spends the summer when other students return to their families. Instead of decamping in the hot months, STEPS students use the time to earn money through internships. The program also allows them to take up to six course credits in the summer, enabling them to hasten graduation if they so choose.

Another important draw for students is Mark Gagnon, the director of STEPS and the counseling services at CSJ, who seems to be the go-to guy for everyone enrolled in the program. Gagnon organizes outings such as rock climbing and movies, and he holds group meetings to explain the intricacies of community services and financial literacy. He’s the one who impresses on students the need to have a primary-care doctor.

“Mark is a good advocate for everything from health care to getting your cellphone fixed,” says Guetti. “I can just go and talk to him about any problem. We all say, ‘Go to Mark. He’ll fix it.’”

Gagnon’s name also comes up quickly in conversation with Daisy Dikeman, 20, who enrolled in STEPS last January. “You can always go talk to Mark about anything,” she agrees. “He helps you with all your problems. Really, everybody here is friendly. This is definitely a family environment.”

Dikeman left home at 14 — “when my mom chose her boyfriend over me,” she says — and lived in two foster homes. Estranged from her mother, she remains close to her father and her extended family. Because she lives with her boyfriend, housing at CSJ is not an issue for her. But she was attracted to STEPS because the program is financially friendly, requiring no money up front, and allows most students to graduate with less than $20,000 in loans.

For Dikeman, the desire to go to college was never in question: “I knew if I didn’t get a degree, I wouldn’t get a good job.” What stumped her was how to pay for it. “I definitely wouldn’t be in college if not for this program,” she says. “I wouldn’t have known how to do it.”

That financial friendliness comes at a cost to someone, of course. The Vermont Student Assistance Corporation (VSAC) is footing some of the bill, as are the Department of Children and Families (DCF) and the Youth Development Coordinator’s Office. The McClure Foundation and the Vermont Country Store have both given money; the latter has guaranteed internships. It helps that in Vermont, foster children of traditional college age have access to an extended range of state services, such as health care, thanks to recent legislation that increased the age at which they “age out” of the system from 18 to 21.

Ann Turner, a youth specialist at the Vermont Department of Labor, believes that STEPS is serving a crucial role in preparing its students for the workforce. “A lot of these kids haven’t had any role modeling about what is expected by an employer,” she says. “Things most of us take for granted, they’ve never been exposed to.”

Using money from the Workforce Investment Act, Turner pays STEPS students to work on the CSJ campus during the summer, doing maintenance and office work. For their part, the students learn to show up on time, present themselves well and follow instructions. “I think it’s a terrific program,” Turner adds.

President Migliore believes his program is unique within New England, if not the country, because of its comprehensive services. Even so, it has proved more difficult than he had expected to get the word out. Of the 150 or so teens who make the transition out of foster care each year in Vermont, Migliore hoped to recruit at least 15 for the pilot year but got only six. Striving to increase that number, he has reached out to VSAC, to judges, to guidance counselors and to DCF caseworkers. He has met with youth-development coordinators and is planning a post-Thanksgiving open house for kids in foster care.

The applicants are required to take college-prep coursework in high school and one of the college achievement tests, although these are used primarily for placement. “The performance of foster kids in high school tends to be uneven,” says Migliore, explaining why admissions officers are more lenient with STEPS applicants. “There are lots of cases of abandonment, family abuse, drug abuse. We try to be extra-sensitive for kids from unconventional backgrounds.”

He mentions one young woman who attended eight high schools in four years, and another who has a 2-year-old child. Migliore expects both of them to graduate.

Some applicants are rejected after being judged “not ready to separate from their negative histories.” But others, like Dikeman and Guetti, find room to thrive on the small campus. All any student needs to succeed, Migliore says, “is a willingness to partner with us. This is an adult environment; nobody is telling you what to do. You’re responsible for your own choices.”