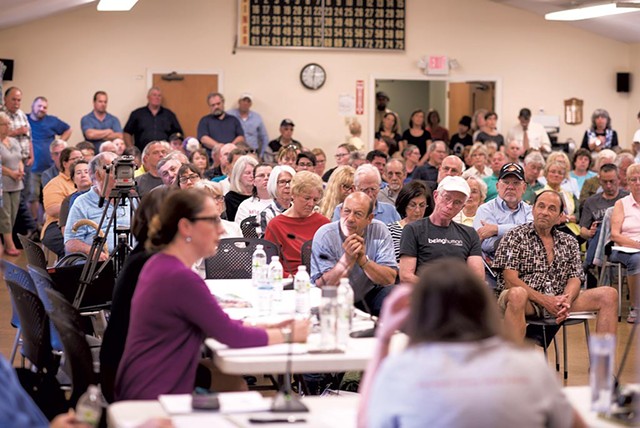 Matt Howland is tired of the name-calling.

Since late last April, when Rutland Mayor Chris Louras announced that his city would seek to resettle 100 Syrian refugees within its borders, Howland and a few dozen others have publicly — and pointedly — questioned the mayor's plan. Their neighbors, in turn, have questioned the motivations of the loose-knit group to which Howland belongs, called Rutland First.

"We've been portrayed as racists, bigots, xenophobes and fearmongers," the 37-year-old Rutland resident says. "And that's really not what we are."

In their public presentations, Howland and fellow Rutland First leaders have been careful to convey that they don't oppose resettlement, per se. They simply wonder whether their city of 15,824 can afford to absorb the war-battered immigrants. And they question why the nonprofit U.S. Committee for Refugees and Immigrants worked in secret — with support from Louras, Gov. Peter Shumlin and Vermont's congressional delegation — to develop a refugee plan for Rutland.

(The U.S. Department of State is expected to decide within the next two months whether to grant USCRI's Rutland application.)

"It'll help the personal security industry in town, cause you'll have to hire people to guard your women and children," added Paul Tanner III.

"Get the fcuk (sic) out of MY country," wrote Pat Donnelly.

Richard Guyette is a frequent contributor to Rutland First's Facebook page. Last week, the 71-year-old retired psychotherapist wrote without explanation that he had recently observed a man at the intersection of Route 7 and West Street "dressed in white, wearing a head covering that looked Arabic to me with some sort of beads hanging down from the waist."

According to Guyette, his alleged sighting may be evidence that the city is already "sneaking [refugees] in the back door."

"There was just nobody I've ever seen dressed like that before," he tells Seven Days. "It made me think whether they were already here."

Guyette defends his opposition to Muslim immigration, arguing that his own ancestors, Maronite Christians, were run out of their homeland in the late 19th century.

"These are the same people who they're bringing here — the people who drove my family out of Syria," he claims. "It was the Ottoman Turks, who are Muslim — radical Muslims ... I'm part Syrian myself. How could I be racist against Syrians?"

Guyette says he simply does not believe that Muslim refugees will "assimilate" in Vermont, which he views as a problem.

"If they don't, then they're at odds with everybody's goals and ideals," he maintains. "If they feel that all infidels should be put to death, I don't know how that's gonna work. Because as far as they're concerned, there are a lot of infidels here."

"If they feel that all infidels should be put to death, I don't know how that's gonna work ... There are a lot of infidels here." Richard Guyette tweet this

It's not just the rank and file who feel that way. While leaders of Rutland First are quick to deny bias in public settings, some have made questionable comments on social media.

"There is quite a bit of wild stuff going on with this speaker," Wilton wrote about Khan, who had criticized Republican presidential nominee Donald Trump days earlier at the convention. "He was brandishing a US constitution at his speech, but in reality he supports Sharia law. Very odd."

In fact, Khan has said no such thing. But that didn't stop another Rutland First leader, former Vermont Department of Public Service commissioner David O'Brien, from making the same allegation.

"My read of his article is that he holds Shariah law above all else," O'Brien wrote on Wilton's page, adding later that Democratic presidential nominee Hillary Clinton "has no issue with Shariah law being defended based on her work as Secretary of State."

In a separate post, Wilton wrote, "If [President Barack] Obama and Clinton had done their job, Mr. Kahn's [sic] son may not have perished, either."

In fact, Khan's son, U.S. Army Captain Humayun Khan, was killed by an improvised explosive device in Iraq in June 2004. At the time, Obama was serving in the Illinois State Senate. When another commenter noted that the war in question had been waged by President George W. Bush, Wilton partially retracted her assertion and then blamed Obama and Clinton for the deaths of other American soldiers and civilians.

Wilton maintains that her opposition to refugee resettlement in Rutland is not driven by "cultural stuff" — and she says she would be fine with as many as 25 Syrians moving to town. And while she says she has "concerns" about the Islamic State of Iraq and Syria "infiltrating" refugee communities, she's mostly worried that taxpayers will get the shaft.

At a Rutland First meeting last week at the Rutland Free Library, Wilton presented a spreadsheet suggesting that resettlement would raise property taxes by 35 percent over five years.

According to Louras, Wilton's numbers are "absurd," "wholly inaccurate" and "pure fabrication." He says he's currently writing next year's city budget and believes the cost to taxpayers — in the short, medium and long term — will be "zero."

The cost of inaction, on the other hand, will be much greater, Louras argues. He sees resettlement as an opportunity to bolster an aging workforce, fill vacant housing and diversify a city that is 96 percent white.

"If this doesn't happen — if refugee resettlement doesn't take place in Rutland — we won't be able to recover from it for 20 years," he says. "It will be a generation before we recognize what a great missed opportunity it was."

Louras, a Republican-turned-independent who has run the city since 2007, doesn't hold back when describing Rutland First. He sees its members as fearmongering "nativists" ignorant of the discrimination many of their own ancestors once faced. He wonders whether they know what happened to the 908 German Jewish refugees aboard the MS St. Louis when the U.S. turned it away in 1939.

"I think many people involved with Rutland First have forgotten that or choose not to recognize it," says Louras, whose Greek forebears fled persecution by the Ottoman Turks. "Rutland is built on an immigrant population, and we need to remember who we are and where we came from."

Shumlin, an outspoken proponent of Syrian immigration to Vermont, agrees with Louras.

"What I would say to the folks at Rutland First, or whatever it's called, is, 'Take a deep breath. Ask yourselves what your ancestors would have said if they had been greeted with the kind of fear that we're hearing from that organization,'" he says.

The governor appears quite cognizant of what it means to be a refugee. He says his father's Jewish ancestors fled "horror, war and discrimination" in Ukraine. His mother grew up in Holland during World War II, he says, and "watched her Jewish friends get dragged away to the gas chambers."

Howland thinks such comparisons are unfair and inaccurate.

"It's like apples and oranges, because we live in a different age now," he says. "When you have a terrorist organization that has actively said, 'We're going to sneak in terrorists through refugee flows,' that raises concerns."

Many Rutland First leaders frame their opposition to resettlement in compassionate terms. Fred Haas, a 37-year-old electrical engineer, acknowledges that Syrian refugees might be able to find minimum-wage work in Rutland.

"But the problem with that is, there's no room for growth here," says Haas, who believes his ancestors came mostly from Germany. "There's not a lot of high-paying jobs."

Of course, the 4.8 million Syrians living in refugee camps — not to mention the 6.6 million who've been forced out of their homes but remain in their country — likely have more pressing concerns than career advancement.

Rutland Firsters say they understand the devastation wreaked by five years of Syrian civil war, in which as many as 470,000 people have been killed. But they have few suggestions as to where the war's refugees might go, if not their own backyard.

"I'm a state legislator, sir. These questions are not even in line," answers Rep. Doug Gage (R-Rutland), who says his ancestry is a "Heinz 57" variety. "I have nothing to do with the federal government."

Similarly, Wilton says it's "not my job as the lowly treasurer of the City of Rutland to figure that out." After some thought, she poses questions of her own.

"What's the [United Nations] doing? What's Obama doing?" she asks. "These are bigger questions than you and I. But, hey, why aren't we pursuing peace in Syria, so these people can go home to their country?"

What a novel idea.

"This is my community. This is where I have chosen to live," Wilton says. "I like it here. It has some struggles. But we don't need to make those struggles worse."

It's Mike's community, too. The Rutland real estate agent, who asked Seven Days to refer to him by first name only in order to protect his family, grew up in Aleppo — perhaps the city hit hardest by the Syrian civil war.

Mike left home in 1980 to attend college in Boston and has lived in Rutland for nearly 17 years. Other than his wife, Laila, with whom he has two young girls, he has never known another Syrian living in Vermont.

"It's OK," he says of the relative isolation. "I like the people here. That's why I've stayed all these years."

According to Mike, those who know he hails from Syria often ask how his family is coping with the war. His answers are grim. Many relatives have fled to the Kurdish city of Afrin, while others are living in Turkey and Germany. Two siblings, Mike says, are still stuck in Aleppo.

"They're scattered all over the place, and nobody's lives are the same anymore," he says. "We pretty much lost everything over there."

Mike, who supports Louras' plan, says he occasionally engages with those who don't.

"I ask them, 'How will this affect you in a negative way?' Sometimes they stumble over this,'" he says. "They tell me they worry. They don't know who [the refugees] are. My answer is, 'They're human beings. They're running from death.'"

Mike says he doesn't "get angry or anything like that" when his neighbors appear unwelcoming to his countrymen.