Driving to Rutland recently, I was taken aback to realize I hadn't been there in 30 years. Back then, I was a sportswriter covering high school football, and Mount St. Joseph Academy, a Catholic high school in Rutland, was a football powerhouse. I made the trip down to write about the Mounties and their hometown rivals, the Rutland Red Raiders (now called the Ravens). My view of the city was from the sidelines, literally.

But teams' fortunes change, as do newspaper beats, and I stopped going to Rutland.

That changed in early May, when my daughter and I drove 65 miles south on Route 7 for a road trip to Rutland. With a population of roughly 15,000 people, it's the biggest city in Vermont outside of Chittenden County. Its major crossroads of routes 4 and 7, marked by Starbucks, CVS and Burger King, could be Anywhere, USA. 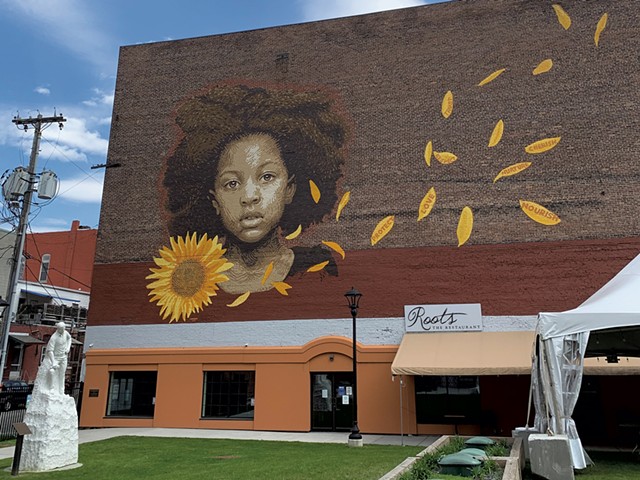 But just a few blocks west of that junction is a historic downtown with local shops and a view of not-so-distant mountains. A distinct and fascinating feature of the business district is the Rutland Sculpture Trail. The collection of eight stone sculptures (with more to come) recollects the history of the region through representational works of art. The Danby marble from which the sculptures are carved recalls a centuries-old local practice. The trail of art guided our visit.

"These are all people who have contributed to Vermont's cultural heritage." Carol Driscoll tweet this

The carved figures include Ann Story and her son Solomon, who were coconspirators of the Green Mountain Boys. Ann cooked and spied for the Revolutionaries in pre-statehood Vermont. Also rendered in marble is Martin Freeman, a Rutland native and 1849 graduate of Middlebury College who became the nation's first Black college president, and William Wilson (known as Bill W.), the Dorset-born, Rutland-raised cofounder of Alcoholics Anonymous.

"These are all people who have contributed to Vermont's cultural heritage," said Carol Driscoll, executive director of the Carving Studio & Sculpture Center in West Rutland. "It takes a lot to come up with a way to present them, interpret their lives and have it be translatable into marble."

The arts organization collaborated with several key partners to organize, execute and finance the sculpture project, she said. They include Green Mountain Power, MKF Properties and Vermont Quarries. The latter business donated marble quarried in Danby — stone valued at $10,000 to $40,000 per sculpture — to produce the artwork, according to Driscoll.

For our trip, my daughter downloaded the Downtown Rutland app, a handy tool for following the trail and learning about its subjects. Using this guide, we started at Center Street Marketplace Park, site of one of the first works in the collection.

Carved in 2017 by the Italian artists Alessandro Lombardo and Andrea Ingrassia, "Stone Legacy" depicts an unidentified stoneworker. The 11-foot-tall sculpture is a tribute to the local people who, dating back to the mid-19th century, carved gravestones, monuments and other objects from Vermont stone.

"It's a tribute to the unknown carver, the not-named carver, who [worked] below the radar," Driscoll said.

After viewing this piece and two others in the park, we spotted Roots the Restaurant at the edge of the green. As it happened, we had a reservation there for late-afternoon drinks and appetizers. 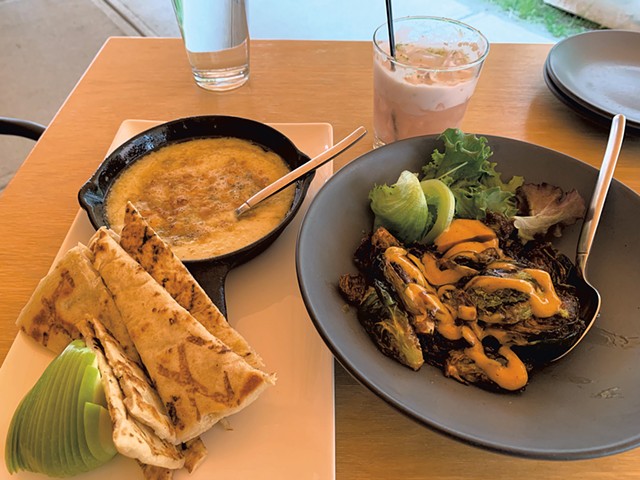 But before the appointed snack hour, there was more art to see. We followed our digital docent to Phoenix Books on Center Street, where an installation sits by the front door.

"Jungle Book" is the work of Barre artist Sean Hunter Williams, who designed and carved the sculpture that pays tribute to Rudyard Kipling's book. Williams spent a summer at the carving studio in West Rutland to create the piece.

Kipling wrote The Jungle Book in 1893 and 1894, when he was living in Dummerston. (See related story.) Williams, who grew up in Montpelier, said he knew the cartoon series as a kid and read the book before making the sculpture.

"What I wanted to do is kind of interpret the characters in my own way," said Williams, 35, noting that he researched bears and wolves that are native to India. "I chose the scene where the jungle [animals] are deciding what to do with Mowgli."

The sculpture trail is a testament to what a small city can do when it commits local resources to a project, he said.

"Rutland used to be more of a hub for carvers and the marble industry," Williams said. "It's nice that they're keeping that connection alive."

The trail also affords easy access to downtown businesses, so we ducked into a few stores. Besides the bookshop, our stops included a clothing boutique, Trap Door, that earned a big thumbs-up from my daughter, and Mountain Music, a record store and jewelry shop. What a treat it was to browse aimlessly in a store after a year of quick in-and-out shopping and curbside pickup.

Still, I loved a totem of 2020 at Mountain Music, where shoppers are greeted by a photo of Prince, wearing granny glasses and peeking through the hole of an album sleeve, captioned by the words "MASKS REQUIRED."

A fun aspect of our walk was coming upon other public art — in particular, murals painted in vibrant colors on downtown walls. We saw whales, a monkey, elephants, birds, flowers, a wonderful cityscape and cool, multicolored painted barrels by Bill Ramage, a tribute to an art piece by Christo and Jeanne-Claude from 1960s Paris.

The trail also led us to an unexpected and lovely lunch. We had planned to eat at Gill's Delicatessen, Rutland's beloved sandwich shop, but changed our minds when we happened upon Tokyo House, a Japanese restaurant on West Street. Our takeout meal of crab and vegetable tempura, spring rolls, and gyoza was as enjoyable as it was impromptu — and a bargain at $20 for two.

With some time to spare before our Roots reservation, we decided to check out Pine Hill Park, 325 acres barely a five-minute drive from downtown. Celebrating its 100th anniversary this month, Pine Hill offers 17 miles of wooded trails for mountain biking and hiking. A path designed for young explorers, the Pine Cone Adventure Forest, leads to 12 destinations, including a climbing rock, a troll bridge and balance beams. 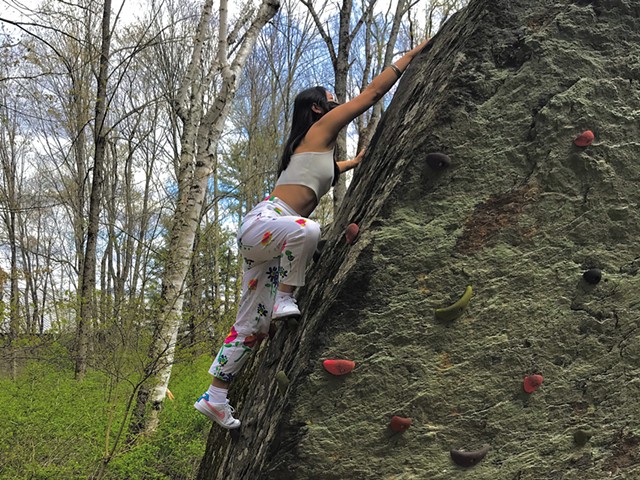 Our day came full circle with drinks and food at Roots, where our table was under an awning at the edge of Center Street Marketplace Park and its three marble sculptures. The cocktails — a pink strawberry sour (with Barr Hill gin) and a purple blackberry lemonade (with Smugglers' Notch Distillery bourbon) — tasted like a prelude to summer. The cheese fondue, a blue cheese and Parmesan blend sweetened with honey, warmed and nourished us on what was, in fact, a cool spring afternoon.

Driving back to Burlington, we stopped for ice cream at Seward's Family Restaurant on Route 7, a dining landmark founded in 1947. I vowed not to let 30 years pass before I visit Rutland again.

My excuse to return will be two more sculptures that are in production. The new marble artworks will depict Julia Dorr, a poet and founder of the Rutland Free Library, and Ernie Royal, the first Black restaurateur in Vermont. He opened Royal's Hearthside Restaurant in 1963 at the site of the current Starbucks.

Mount St. Joseph dropped its football program in 2018. The school's longtime and legendary coach, Alfonso "Funzie" Cioffi, died in 2014 at age 84. Maybe one day a sculptor will carve a marble likeness of him, cradling a football and high-fiving his quarterback.