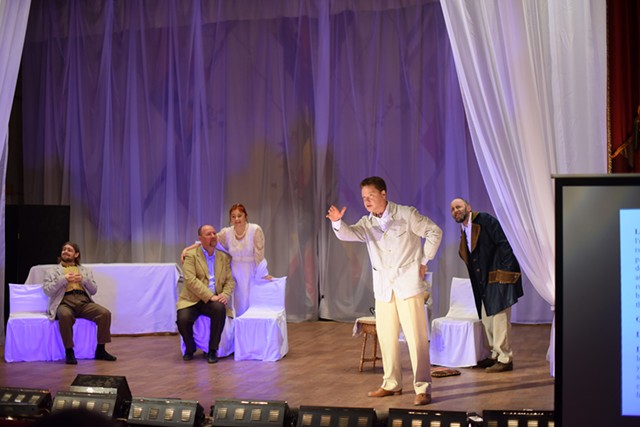 The current political climate between the United States and Russia may be chillier than a Siberian winter, but culturally, Burlington and its Russian sister city, Yaroslavl, still enjoy a warm and fuzzy relationship. This week, Vermonters will have a rare opportunity to take in performances of a play by Anton Chekhov, Russia's most celebrated playwright and short-story author, performed in Russian.

The two performances of Chekhov's The Cherry Orchard, hosted by Burlington High School and Middlebury College, are part of the Burlington Yaroslavl Sister Cities Program's annual "Days of Russian Culture." From April 18 through 24, the Vermont nonprofit group will host a 21-member delegation of Russians from Burlington's longtime "twin town," as the Russians call it, including the 16-member semi-professional Atmosphere Theatre Troupe.

The Russians' visit represents the "return journey" of the latest cultural exchange that began last fall, explained Alex Bunten, president of the Burlington/Yaroslavl program. In October 2016, a small delegation of Vermonters, including several Burlington city councilors, visited the Russian metropolis of more than a half million people. That and the upcoming Russian visit are among the largest cultural exchanges between the two cities since their relationship was first established in 1988.

The Cherry Orchard, Chekhov's last play before his death from tuberculosis in 1904 at age 44, tells the story of a turn-of-the-century aristocratic family that's fallen on hard times. The story centers on its matriarch, Madame Lyubov Andreievna Ranevskaya, who returns to her family's estate, after a long self-imposed exile, just as its renowned cherry orchard is about to be auctioned off and cut down to pay off the mortgage.

Though the play will be presented in Russian, it will not feature word-for-word translation subtitles. Instead, select pieces of dialogue and touchstones of the plot will be projected onto a screen behind the performers to help audience members follow the story.

Burlington theater artist, writer and self-described "Chekhov geek" Geeda Searfoorce will also give a pre-show presentation at the BHS show to deconstruct the story and put the play into a larger cultural and historical context.

For instance, Searfoorce noted that Chekhov, the world's second-most-performed playwright after William Shakespeare, is considered one of the first authors to adopt an ecological perspective in a modernist way. His writing of The Cherry Orchard, she noted, coincided with the rise of industrialization and the deforestation of Russia in the late 19th and early 20th centuries. The play laments not only how industrial development was degrading the landscape but also how it was breaking down Russia's traditional social order.

As such, Searfoorce said, the play's environmental and social messages come at a timely moment in U.S.-Russia relations amid rising global concerns about climate change.

"The arts are a great hub around which we can have a conversation about differences in culture and what that means for politics," Searfoorce said. "The arts have so much to offer — to create and further those conversations in a deeper way."

Yaroslavl, one of Burlington's seven sister cities around the globe, is in Russia's so-called "Golden Ring" and is a UNESCO World Heritage Site about 160 miles northeast of Moscow. The ancient city, known for its majestic Russian Orthodox churches, just celebrated its 1,000-year anniversary. By comparison, Moscow was founded 870 years ago.

Yaroslavl has another significance to Vermonters: It's the city where Bernie and Jane O'Meara Sanders honeymooned in the 1980s while the former served as Burlington mayor. He forged this sister-city relationship at the close of the Cold War. In the decades since, cultural exchanges between the two cities have included everything from jazz musicians to firefighters to ice hockey teams.

The politics of Yaroslavl are also "pretty complicated," Bunten said, because the city is seen, like Burlington, as a liberal bastion. He noted that in its most recent mayoral election, Yaroslavl was the only city in Russia to elect someone not from the United Russia party, the Vladimir Putin-aligned ruling party. Last August, Yaroslavl's anti-Kremlin mayor Yevgeny Urlashov was sentenced to 12 years in prison on what many allege were trumped-up corruption charges.

Cultural exchanges like this one, Bunten added, help to remind residents in both countries that not all Russians are like Putin, nor are all Americans like President Donald Trump. As he put it, "At the end of the day, people are people."